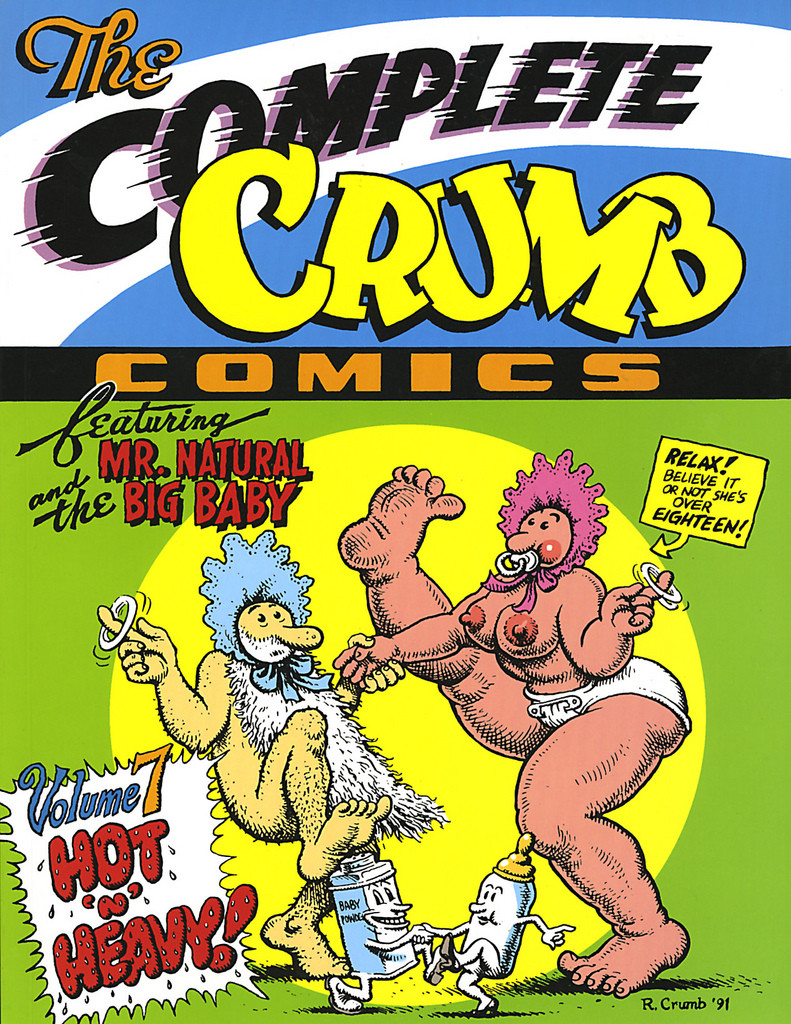 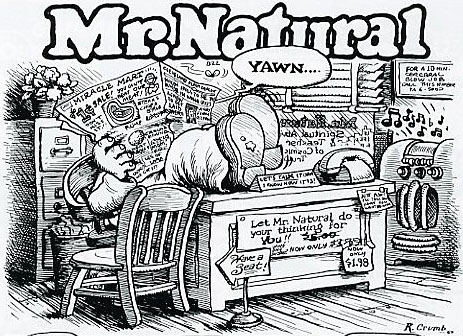 This whole volume covers less than a year in Robert Crumb’s productive career when he was at the height of his popularity as an Underground cartoonist. Indeed, in his introduction to the volume he admits he felt like the Underground publishing industry rested on his shoulders, so relentless was the demand for his work from the publishers of anthology comics.

Crumb is certainly one of a handful of truly important cartoonists America has produced, but while the work here is good, very polished and very popular at the time, it is not among his best and falls far short of being his most interesting. Under pressure to produce more and more work, Crumb’s style became more and more polished and streamlined, and unnecessary detail was edited out to enable him to produce the maximum number of pages while living a life that seemed to consist mostly of parties, affairs and getting stoned.

A lot of the material in The Complete Crumb Comics Vol 7 comes from a couple of titles, including Mr Natural 1. Mr Natural was an incredibly popular character, who lampooned the counter culture with his offers to enlighten people while robbing them blind, but he was far from the most complex of Crumb’s many creations. There is a long story, ‘Honeybunch Kaminsky, the Drug-Crazed Teenage Runaway’ which jousts at very obvious windmills and doesn’t add up to a satisfying parody after an awful lot of pages. There’s more pretty art than content on display, and there’s a feeling of lassitude, of shocking for the sake of it.

The most interesting story occurs right at the start of the collection, in which Crumb imagines himself being interviewed by a dim but sexy hippy presenter about the dualism in his work. As she tries to ask him how the relationship between satire and the fact that he seems to be rather enjoying the extreme sex and violence he draws works, he becomes aroused and jumps on her. This dichotomy would be central to a lot of Crumb’s later work, and his self-awareness is very interesting.

Robert Crumb is a great comic artist, and his Underground period is certainly very important – things he did during the early years when he was learning his craft would impact the whole counter-culture scene – but in this volume the material lacks a certain fizz. Mr Natural, while popular, was never one of his best characters, and there’s a wavering feeling that he’s going through the motions here, despite some lovely drawing on certain strips. Go back a volume for the confrontational firebrand Crumb could be at his best!