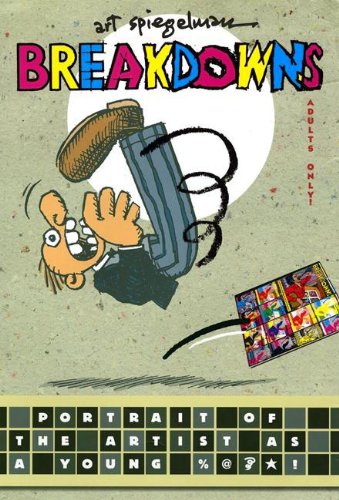 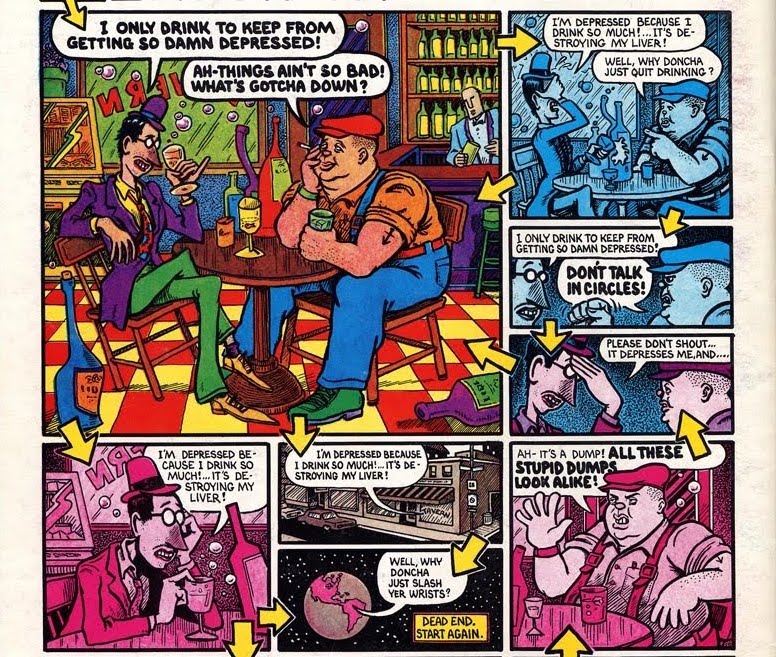 Art Spiegelman’s Maus, arguably kick-started the English language graphic novel boom. The downside is perhaps the overshadowing of short-form work, ironically including Spiegelman’s own – this oversized selection of his 1970s shorts was out of print for thirty years.

As readers now might expect, a number of these are autobiographical, including diary pieces and ‘real dreams’, but others are non-fiction, conceptual, and experimental. Some of these stories are only a single page, but still with up to fifteen panels.

In the three page ‘Maus’, Germans are cats and jews are mice, in a bedtime story told by a “Mauswitch’ survivor father. It’s a condensed story that prompted the later book.

‘Prisoner on the Hell Planet’, was included in the Maus book. It’s the frank and unblinking account of his mother’s suicide, and the sense of grief, but also guilt, he feels. It’s drawn on scraper board for a white-on-black woodcut effect. There are some extraordinarily powerful images here, worth seeing in this oversized format. The stylistically formalised angst and ironic B-movie title saves it being too much of an agonised howl – too pushy of the readers’ response.

‘Cracking Jokes’, in contrast, looks at humour and the darkness within it. It’s pitched somewhere between academic report and documentary film. A ‘fool’ or court jester, the prongs of his hat revealed as phalluses, presents the case to the reader. While a psychiatrist and patient joke, is run in permutations illustrating the points being made, about: the fine line between humour and cruelty, authority figures, and even castration anxiety. These four pages are packed with both fascinating content, and an elegant mastery, indeed boldness, with the form. Spiegelman even subverts the very truths he is telling us: to illustrate the importance of timing he repeats the same image, unchanged except in the last one the patient’s reflection in the mirror says “yawn”.

‘Little Signs of Passion’ combines a boiled-down hundred word story of the potential love between Marsha and Augie, with a quote about the need for “what editors call ‘complication'” in love stories. The virtually static images reduce the story even further: Foul Bernie, (‘the complication’) kicks over a tin of paint outside Augie’s sign writer shop that slowly pours to the cinema where Marsha works. The red paint seems to mock the fatal violence that may ‘complicate’ other love stories. It’s a story about stories, and with Marsha and Augie’s work involving visual writing and talking pictures – it’s about comics too.

In some pieces the text and images are deliberately out of synch. In others he plays on the tension between panels and page – insects walk across one, another reads in multiple, circular sequences. Others play upon the panel borders and what unexpected things may be outside them.

Others still are trying to find the right form for the content. ’As the Mind Reels’ is delivered with the neutered banality of a TV soap – the panels mimicking old TV images. But this no simple exercise – the conversation the bland, smiling author surrogate Legman is having is a verbatim conversation between Spiegelman and his stepmother. Maus readers will recognise his father’s difficult behaviour, which we come to understand by the end of that book.

The new edition includes a complete facsimile of the original volume, bookended by a lengthy introduction in comics form, and an afterword.