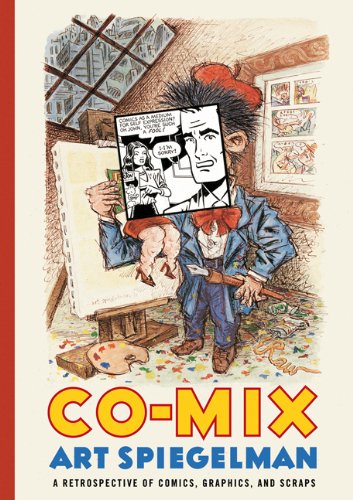 Co-mix, isn’t in fact a book of ‘comix’, or a graphic novel: it’s an artist’s monograph of Art Spiegelman. However, it does gather a number of otherwise hard to find strips from early and late in his career.

Perhaps weighed down by the acclaim and weight of Maus, Spiegelman afterward seemed to shy away from creating serious comics. He drew book covers and illustrations, created and edited books of children’s comics, and journalism in strip form. It took the twin towers tragedy for him to create another graphic novel. Combine this with his famously, slow, analytical approach, and we’re not looking at a large body of work.

So, while this oversized hardback isn’t even 50% strips, it’s still a significant part of his oeuvre. Spiegelman’s work is incredibly dense, both in ideas and panels per page, so a dozen pages of quality  comics is equivalent to a whole graphic novel by most other people.

His peak period creating shorter material was the 1970s, in fact just six years from 1972 to 1977. Most of that work was collected in Breakdowns. Co-mix therefore covers his formative years, his few non-Maus contributions to Raw, and miscellaneous later pieces.

The earliest examples are from the late 1960s – mostly mimicking underground comix, complete with breasts, dragons, flowers, floating mouths and druggy surrealism. He looks no more at home with this than his attempts at syndicated newspaper strips.

A few pages later we reach 1970, and the art really improves, although each piece seems to have a specific source: Robert Crumb, Harvey Kurtzman, Jay Lynch, etc. Of course in time he would fully absorb his influences and use them more artfully. Some of the later strips are about other creators: he pastiches Charles Schulz, in an appreciation upon his ill-health retirement from Peanuts; he and Maurice Sendak illustrate their conversation about children’s and adult books. Perhaps most movingly, he praises his lecturer colleague Kurtzman, in a presentation to their students.

He looked at the tragic past of his family in Maus, and works towards a future with Francoise Mouly and children in assorted material about childhood and family. Others look like journalism commissions in strip form, about refugees, the USA, and his Jewish background.

Raw ‘co-mixed’ European modern art and American popular culture, and we see that too in ‘Lead Pipe Sunday: Dead Dick’, which mashes up Chester Gould’s Dick Tracy with surrealist poetry and German Expressionism – it turns out they’re not so different.

The same elements come to light in his book covers: on one hand for pop culture re-appropriators like Tom de Haven, and on the other for European experimentalists like Boris Vian (only available on the German translations!). Between those extremes are his covers for Paul Auster books, including his conceptual detective novels like City of Glass, which Spiegelman helped turn into a graphic novel masterpiece.

Also covered are his New Yorker covers, and work as a consultant for Topps trading cards – including spoof products Wacky Packages.

It’s a fascinating book, that illuminates the overall development and working processes of one of the best ever graphic novelists and comics creators. Maus put visual artistry in the background, so we might forget what a master of visual communication Spiegelman is. The most avid fan will still find plenty new here, and the best pieces like the ‘Two Fisted Painters’ bound in pamphlet, are worth the price on their own.