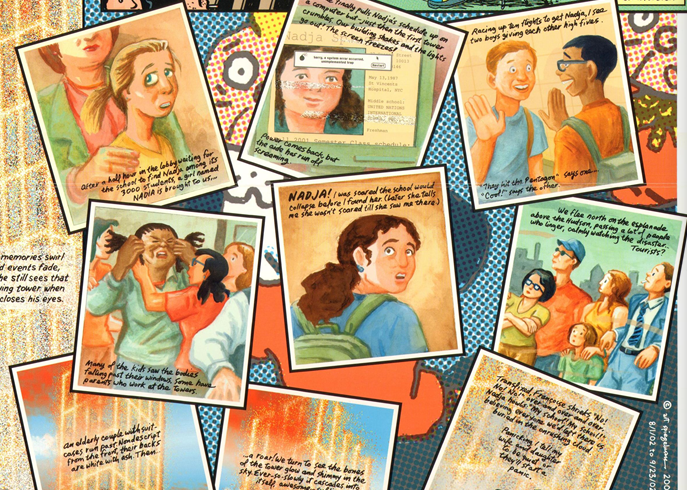 Throughout his career Art Spiegelman has posed the question of whether or not comics can be art. He’s used mainstream literary acclaim to popularise his editorial sensibilities, and been directly responsible for many exceptional works, both personal and anthologies. He so rarely puts a foot wrong, that the emperor’s new clothes of In The Shadow of No Towers comes as a complete shock.

The title refers to the absence of the World Trade Center after 2001. The covers contrast gloss black elements on a matt black background, with the front portraying the peak of the World Trade Center, but some may find the back cover distasteful. Silhouettes of characters from historical newspaper strips are randomly scattered as if falling, with the parallel obvious. Spiegelman explains within how he found refuge from tragedy in the strips, but that’s not the initial impression most will take.

A point Spiegelman makes is that for many the events of 9-11 represent the generational benchmark for incomprehensible horror that first reports of concentration camps engendered in the 1940s. He delivered his watershed work on that topic, then didn’t draw comics for many years after, so Spiegelman’s commentary on a similarly tragic event witnessed first hand has an inbuilt level of anticipation, heightened by his ruminative and experimental nature and intellectual capacity. The sense of this book being somehow an event is further raised by Spiegelman’s introduction relating the difficulty experienced in producing ten pages of comics. While these pages display Spiegelman’s customary density, it’s a great shame that this effort delivered no more insight or understanding than supplied by a random blogger, or contributors to the three 9-11 anthologies. Tribeca Sunset by the largely unknown Henrik Rehr achieves greater success as both memoir and commentary, without being as artistically stimulating. At the very worst In The Shadow of No Towers could be considered an exploitative indulgence.

The artistic trimmings are fine. The manic exaggeration of characters from early comic strips is utilised to represent contemporary fears, and the sheer variety of styles employed is joyful, including the self-referential, almost cubist comic experimentation. Repetition of Spiegelman’s personally terrifying glimpse of one tower as a flaming skeletal structure just prior to collapse is a powerful touchstone, but the political content will be divisive. Spiegelman adopts a clear political position throughout, and to some extent time has validated fears committed to print while the 2003 invasion of Iraq was under discussion. Those of an opposing political persuasion will disagree.

The early newspaper strips in which Spiegelman sought solace are notable and spectacular. Attempting to draw any kind of parallel from them, though, is really straining beyond the call of duty for significance. Yes, there’s a Little Nemo strip in which skyscrapers collapse when a giant Flip blunders among them, and the Katzenjammer Kids set off dynamite to interrupt a 4th of July speech. There exists, no doubt, a panel of the Hulk jumping into a building causing it to collapse, or of the Joker blowing something up. Do they have equal portent?

A final element that impacts greatly is the presentation. Are ten pages of Spiegelman’s strips, seven strips reproduced from roughly a century previously, a pair of two page essays and a beautifully designed package worth £20? On content alone, no, but as an artefact, possibly so.