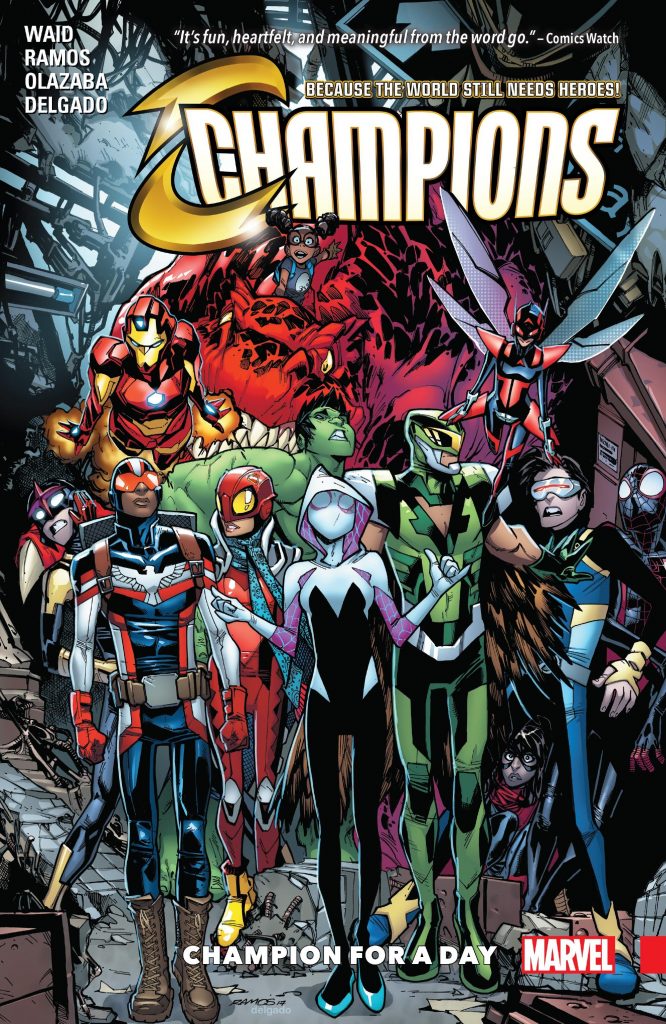 Although this is indeed Champions Vol. 3, it doesn’t continue directly from The Freelancer Lifestyle. Anyone following the continuity will be confused if they don’t know what went on in Avengers/Champions: Worlds Collide.

Why is it that membership drive stories in superhero comics are always so much fun? Suspense surely contributes, wondering if a favourite character will be inducted or cut from the roster, and it’s also the chance to see a whole lot of bonus superheroes and how they interact with the main cast. Adding to that is the joyful mood Mark Waid has prioritised since the start of the series. If you’re involved with any of the cast, the opening chapter of Champion For a Day has a fair quantity of punch the air moments. Moon Girl and Devil Dinosaur’s appearance is a gem, and a battle of intellect between Hulk and Ironheart is great. Matters are elevated further by the more serious business of Vision and Viv Vision coming to terms with what happened in Worlds Collide.

That plays out in a way that’s tragic and divisive. Waid chose to do what he chose to do, but it surely won’t be to all tastes, and Humberto Ramos might have employed greater subtlety in illustrating it. Elsewhere he’s on form, and the flashback sequences he provides without panel borders work well with the sepia colouring of Edgar Delgado.

Champion For A Day is the creative team’s swansong. Waid notes through Ms Marvel’s dialogue that the stories have moved away from the original concept of helping ordinary people, but they’ve never moved away from entertaining and surprising. Ramos deserves some credit for providing all the art on eighteen straight episodes, a workload of Kirbyesque proportions given that so many 21st century superhero artists find three consecutive chapters a Herculean task. It’s left to Jim Zub and Sean Isaakse to continue their legacy from Northern Lights.

Wait, though. This book isn’t finished. Just under half the content is a tie in with Monsters Unleashed. Jeremy Whitley follows the tone Waid’s taken by centring the story on the controversy surrounding an equivalent of the Dakota oil pipeline. For anyone who’s not seen the out of continuity return of the Freelancers in The Freelancer Lifestyle, there’ll be some well plotted surprises to begin with, but overall the story follows a predictable pattern, isn’t that thrilling and the art by Ro Stein and Ted Brandt (sample page right) is plain ugly in places. It makes Champion For a Day very polarised, with the enjoyable content from Waid and Ramos dragged down by the remainder.