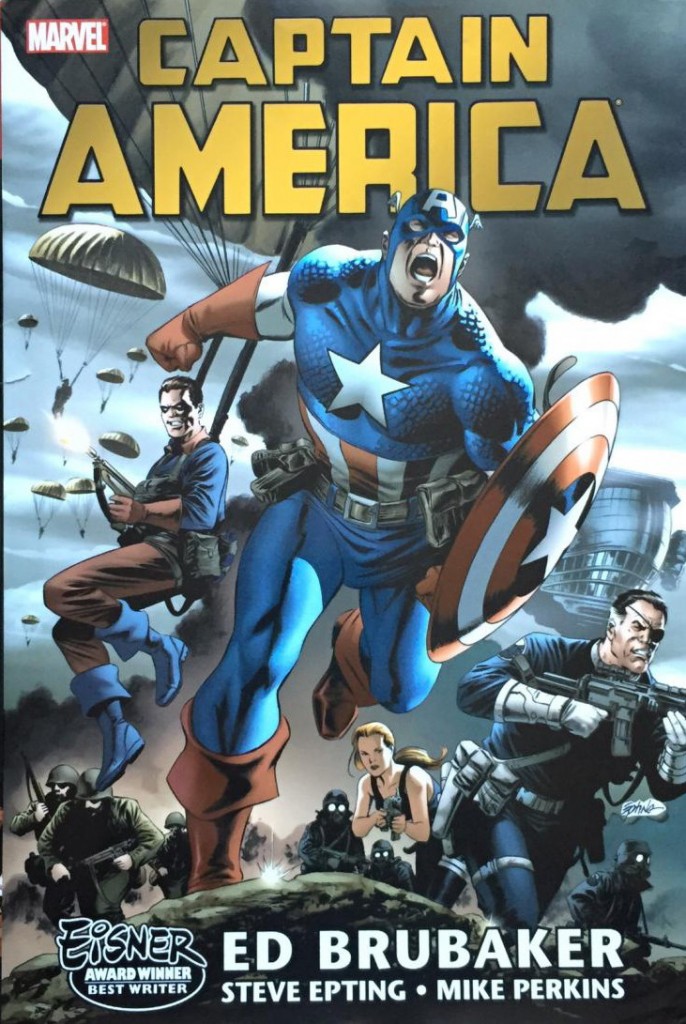 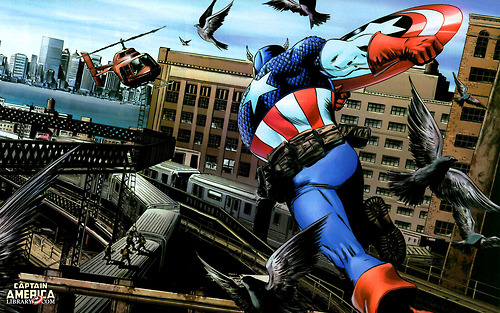 Marvel have always had an awkward relationship with Captain America. He was the right superhero at the right time when introduced in the 1940s, wrapping himself in the flag and punching Hitler on his first cover. He’s so intrinsically glued to the patriotism of those times that since revival in the 1960s he’s very much thrashed around. In his own title only Steve Englehart in the 1970s and John Ney Reiber after 9/11 have explicitly focused on the patriotic elements of Captain America for any protracted period, and each honed in on troubled times at opposite ends of the spectrum. Mark Gruenwald also made attempts, but sporadically and with lesser creative success.

One view of Captain America could be that he’s an icon without purpose other than reflecting what the USA experiences. Ed Brubaker blew that theory out of the water. From the start he shifted Captain America into a more finely conceived cloak and dagger world than had previously been portrayed. Spymaster Nick Fury, while sometimes absent for an extended period, is always lurking in the background prodding events, and Captain America is rarely portrayed as a solo act. In addition to Fury, The Falcon, Black Widow, Iron Man, Sharon Carter, later Winter Soldier, and others form a sort of Team America.

Brubaker made a statement of intent right from the start. In the Marvel universe dead very rarely means dead unless it’s a character without super powers. Captain America’s World War II sidekick Bucky Barnes fitted that profile. It’s surely no spoiler to reveal that after Captain America grieving over his dead partner for forty years, Barnes returned. Not only that, he returned in suspenseful and credible fashion.

As a title, Captain America has been hampered over the years with more mediocre or mundane artists than most long-running series, but as if to compensate Brubaker’s material throughout was blessed with the best Marvel could provide. It began with the gifted Steve Epting, an artist who grew up in public, developing from a clumsy raw talent into a storytelling master. His high contrast three-dimensional polish brings the stories to life in exceptional fashion, and the engineered gloom of Michael Lark’s accompanying flashback sequences is almost as adept. There are also decently drawn chapters by Mike Perkins, and Lee Weeks, on a touching Winter Soldier solo outing.

It is the mid to late chapters of the Winter Soldier story that shine here. Having delivered a home run the first time out, the ongoing narrative rather thrashes around marking time until the next big event, The Death of Captain America, which concludes this volume. Not that it’s ever bad, but this material can’t match the opening. There is a bigger purpose, however. Brubaker gathers a group of villains who’ll play as large a part as the supporting cast, and there are many fine small moments. Particular attention should be paid to the chapters near the end detailing the cast’s involvement in the Civil War crossover, as Brubaker plants all the material that will come into focus during the volume after next, Captain America Lives.

Most of this material was previously collected as Winter Soldier vols 1 and 2, Red Menace vols 1 and 2, (or Winter Soldier Ultimate Collection and Red Menace Ultimate Collection) and Civil War. The latter chapters are also to be found in The Death of Captain America Omnibus, into which this continues. This, however, has stories not included in those collections, including a chapter of the House of M crossover and interviews conducted with those who’ve worked on Captain America over the decades.