Bunny vs Monkey and the Human Invasion! 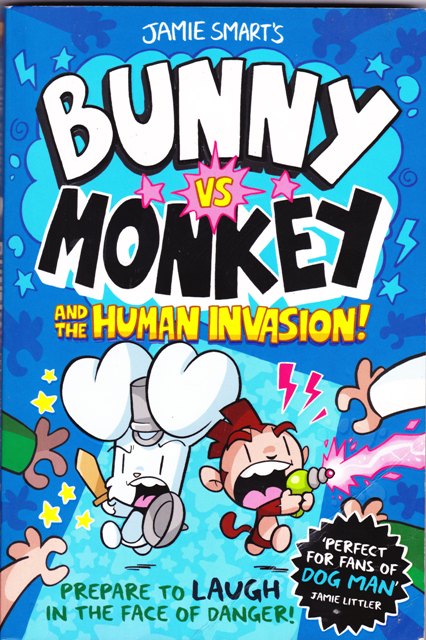 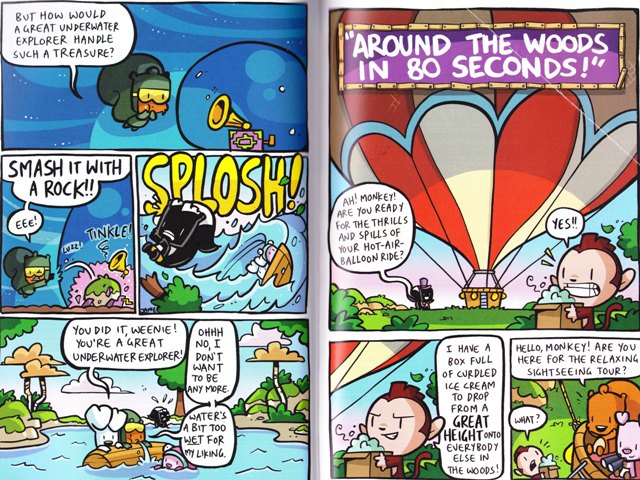 Jamie Smart’s hilarious and anarchic Bunny Vs Monkey has been a regular feature of weekly comic The Phoenix for years now. Its continued popularity has ensured that publishers David Fickling Books have reprinted multiple paperback editions with the most recent being their new slip-into-your-schoolbag digest size format. This second omnibus collects the third and fourth books The Stench and The Wobbles.

Park Ranger Derek P. Brigstocke is determined to find out why the woods are filled with explosions while the local council plans to build a road right through it. In a bid to protect their home, Bunny rallies the animals and calls for a truce with Monkey whose ego ensures that doesn’t last long. Apart from that life goes on as normal. Skunky is inventing, Le Fox is guarding, Metal Steve is still metal, Action Beaver is actioning, Weenie Squirrel is baking and Pig is well… Pig. They’re united against a common foe but for how long? Skunky and Le Fox know more about the secret origins of the forest denizens than they are letting on and when Bunny finds out what there’s going to be trouble.

Series creator Jamie Smart has a winning formula pitching the sensible amiable Bunny against the delusional out-of-place Monkey in a battle for the woods they inhabit. Now running to seven individual volumes the secret to Bunny vs Monkey’s longevity is that Smart makes it so much more than simple yet brilliantly rendered slapstick battles. He takes the time to weave in a continuously developing plot and has a valuable ability to give each player not only an identity but a personality.

He’s also one heck of a cartoonist and a new layout accentuates how good he is. The chaos flourishes in the larger panels, the art has been touched up and the colours have a new vibrancy. It also eliminates the crowding problem previous editions had, bringing out the nuances in Smart’s art to emphasise great ideas like the Ca-MOO-Flarj. As a comedic writer Smart can make you think you know what’s coming next before blindsiding you with an unpredictable funny ending you didn’t expect again and again. The joy then comes in wondering how a story isn’t going to end. 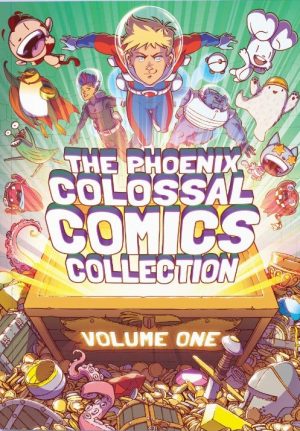