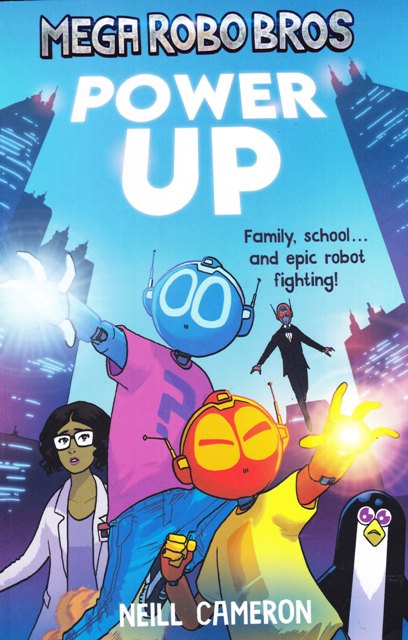 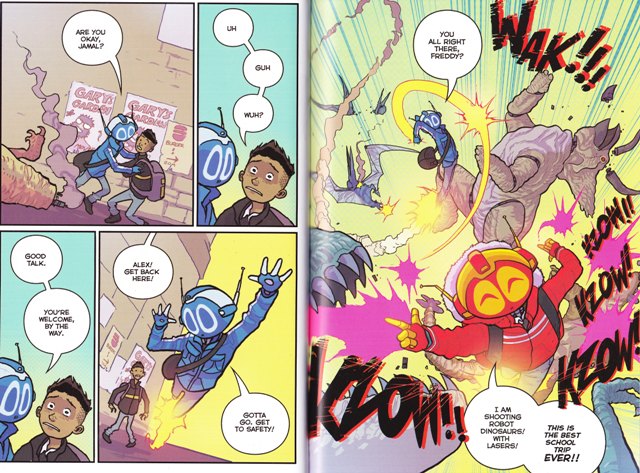 Alex and Freddy Sharma are your average brothers who bicker for stupid reasons, will eat their bodyweight in biscuits and have pets. They live a relatively normal life in a futuristic London with their dad Michael, a science journalist, and their mom Nita, a brilliant cyberneticist who works or government agency R.A.I.D (Robotics, Analysis, Intelligence and Defense). Except that Alex and Freddy are probably the most powerful sentient robots the enigmatic Dr. Roboticus ever designed, robots that will age and grow at a normal rate. Nita and Michael try hard to keep things ordinary but when you stand out, you’ll get the wrong kind of attention.

Mega Robo Bros: Power Up is a smaller, chunkier, repackaged format of Neill Cameron’s award winning comic serialised in the weekly The Phoenix and previously published as Mega Robo Bros. It’s a cracking story that works so well because of how relatable the cast is. Alex wants to be normal, the younger Freddy wants to be everything but. Nita and Michael try to raise well-adjusted lads but most of their time is spent refereeing fights and finding shoes. Cameron inserts them into normal scenarios every child experiences from trying to impress your friends to facing down bullies. It’s sharply observational and hilariously witty, Cameron’s art astounding. In fact, the original outing of Mega Robo Bros won the Excelsior Award for Best Junior Book and we gave it a five star rating!

So why bother with a new review of what is essentially the same material as last time? And how could it possibly get better? Well, the pages have been reformatted so that panels that were previously one out of three or even four now have their own page. Spreading the art over a greater page count with new touches of colour give Cameron’s wonderfully funny sequences and superb robo-stomping action fresh room to breathe. Plus there’s some brilliant new material including profiles and the very funny strip “The World According to Freddy”. The result is most excellent!

Mega Robo Bros: Power Up is aimed at the kids, the new size just right for slipping into the school bag, but adults should love it too. We’ve raved plenty about Cameron’s artistic ability and this format only enhances that opinion. If we could give it six stars, we would!