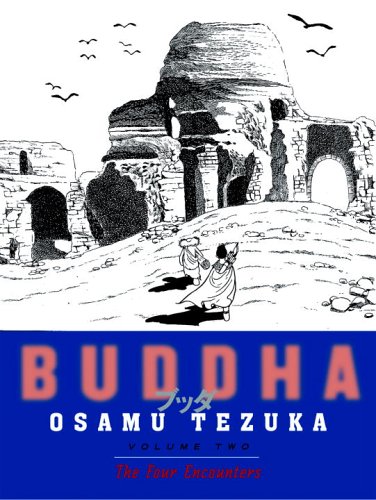 This second of eight volumes continues Manga legend Osamu Tezuka’s fictionalised story of Siddhartha, who will become the Buddha. The actual details of his life are mysterious, which lets Tezuka develop his own supporting characters, and imagine the dramatic situations that shaped his beliefs.

Young Siddhartha is being moulded to take over the throne of his small Indian nation, but already has reservations. He’s growing bored of the feasts and amusements laid on by his parents, and becoming interested in spiritual matters. He adventures outside the city with low caste Pariah boy Tatta, and is enthralled by free spirit Migaila, starting to empathise with those less privileged. This could come across as condescending patronage, but Tezuka convinces of the boy’s sincerity.

They spend time with Brahmin monks, and we are introduced to principles that would shape Buddhism, such as the belief in reincarnation shaped by karma (how one has lived in this life), and the idea that suffering is the path to enlightenment. Siddhartha is both impressed and appalled at the conviction and self imposed suffering of the Brahmins in their quest.

Back home he becomes unsettled and sickly, but the King cares little for his son’s feelings, emphasising the duties and responsibilities of a prince. His parents aim to solve both issues by arranging a marriage to his cousin Yashodara – a princess of a powerful neighbouring kingdom.

Sidhartha progressively faces a conflict between what he feels is his true calling, and things that others believe are for the greater good, such as protecting the kingdom. While Siddartha is the clear hero of the book, older readers may empathise a little with his parents!

By the end of this volume, Siddartha takes the decisive step into his future role, and the next generation arrives, set to play key roles in future volumes. Along the way there are powerful dramatic scenes, including the challenge from ambitious young warrior Bandaka. Siddhartha feels he has to engage with it to save someone he cares about.

The translation Americanises some cultural references: we see in a busy market a vendor shouting ‘hotdogs’, and a spectator responds to a masked warrior by commenting that even Superman doesn’t wear a mask. It’s amusing, but slightly jarring.

The art again combines different stylistic elements. Human and animal figures are rendered in expressive brush lines. Faces vary from realistic authority figures, to cute children and goofy ‘extras’. It’s reminiscent of Uderzo on Asterix. Buildings are rendered with architectural line work, and the tonal landscapes are both realistic and lyrical, and it’s extremely satisfying when Tezuka combines these elements. The nearest equivalent in English language work would be Cerebus by Dave Sim with backgrounds by Gerhard.

Western readers may wonder who this is written for. The slapstick sequences and cute animals might suggest it’s for children. However, some story elements are dark and violent, the self-punishment of the monks, and the King’s treatment of someone who crosses him. The anatomical exactitudes, in the US would have this labelled ‘Mature Readers’. The themes are mature (in the broader sense of the word) – privilege, relationships between humans and animals, and the tension between responsibility and desires. In particular, there’s focus on the Indian caste system: conflicts between castes, people passing as other castes, and forbidden love across castes.

The ambition is admirable, and Tezuka’s take is fascinating, by turns tender, intense, funny, and thrilling. In the first volume some of the extreme manga stylings were jarring, but this time it feels a more comfortable whole.