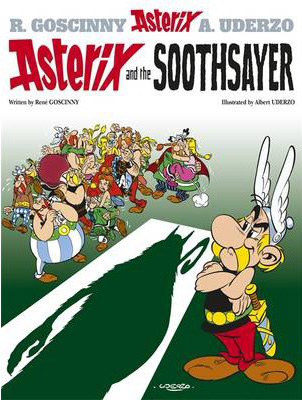 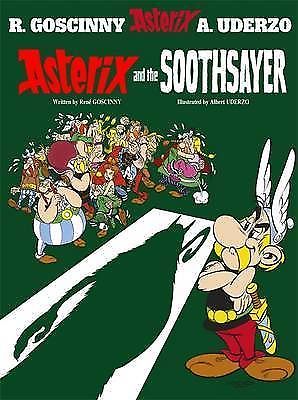 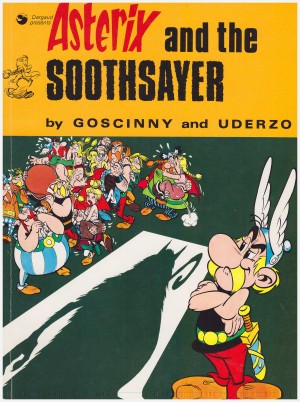 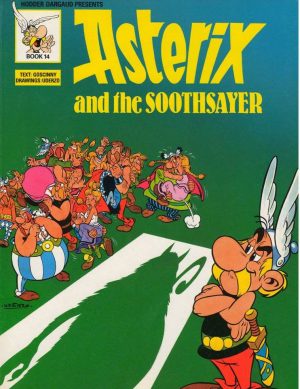 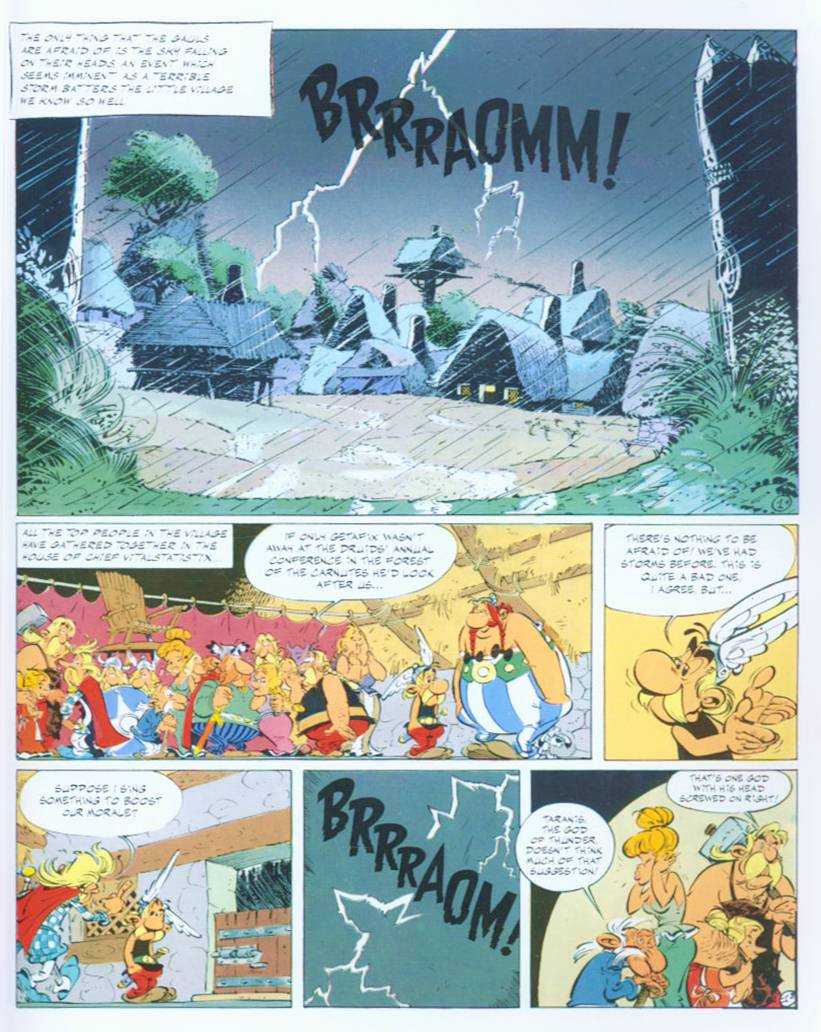 Asterix and the Soothsayer is the nineteenth Asterix book by artist Albert Uderzo and writer René Goscinny, first printed in 1972, at the tail-end of a run of great books that had begun five years earlier. Many of the other adventures involved quests, or some threat to be dealt with, and not a few of them examined the possibilities of Asterix’s village losing their druid/magic potion, their one advantage over the occupying Romans. This book instead takes a look at human weakness or stupidity (delete as applicable), especially as it pertains to superstition and religion.

We join everyone in Asterix’s village as they shelter in Chief Vitalstatistix’s house during a wild storm. Everyone, that is, apart from Getafix, away at a druids’ conference, which is just as well, as he would have given short shrift to the visitor that comes knocking at their door at the height of the storm. It’s Prolix the Soothsayer, an old hand at preying on the weaknesses of gullible fools. Prolix ‘predicts’ that the weather will improve after the storm, and this is enough to convince the villagers of his magical powers. Asterix alone is impervious to Prolix’s transparent nonsense, yet everyone else that comes into contact with the charlatan falls prey to his shtick. The more greedy and ambitious they are, the harder they fall.

Hanging around, at the behest of Chief Vitalstatistix’s wife, Impedimenta, Prolix soon has the villagers all sneaking off to see him in his forest hideout, which becomes increasingly palatial as they come bearing gifts while seeking his otherworldly wisdom. He’s even able to flatter and sucker the Romans. It takes the return of our missing druid to restore order to the situation, and after some plotting and not a little mayhem, everything returns to normal, as it invariably does in Asterix books.

As always, there are characters in the story based on real people – Prolix is the American actor James Coburn – though many of the contemporary references will be lost on modern (and not-French) readers and detract not one bit from the enjoyment to be had from these great books.

Interestingly, although they are disparaging of the gullibility of the masses when it comes to religion, the creators don’t hesitate to depict Getafix (as a druid, the closest thing the village has to a purveyor of mumbo-jumbo) as the most pragmatic person in the entire village.

As mentioned above, this book was part of a superb run of adventures. Both Goscinny and Uderzo were firing on all cylinders in this period, and it was a standard they’d would struggle to maintain in later years. The artwork is excellent, and the story rattles along beautifully, with perfect pacing and timing. Lacking any real danger, or villain to fight, our protagonists instead have a riot (often literally) pointing out many of the absurdities of the human race, some of which haven’t changed noticeably in two thousand years.