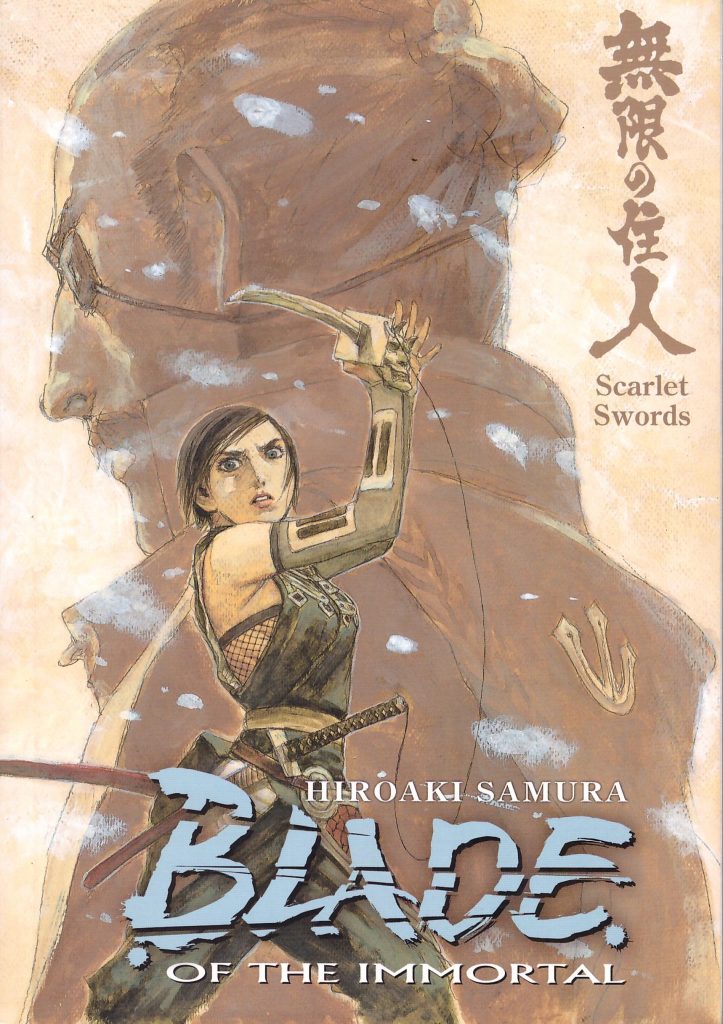 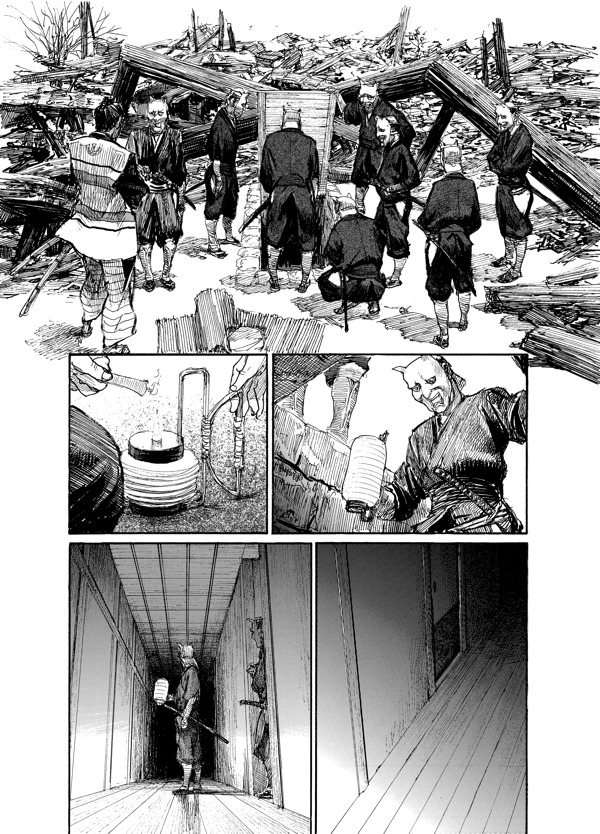 Scarlet Swords is a series of stocktaking episodes as Hiroaki Samura swivels around his large cast, shows us what they’re up to, discloses some plans, and sets a few wheels in motion. There is only a single action scene, but that’s far from saying there’s nothing going on for anyone who’s become invested in that cast.

The opening sequence is the second part of the conversation begun in Footsteps, between Rin and Anotsu Kagehisa, the man responsible for the murder of her parents whom she’s sworn to kill. This isn’t their first conversation since her parents died, and the moral ground has shifted considerably since that point, which is part of what makes Blade of the Immortal such an absorbing series. The balance of power has also shifted, and Anotsu and his Itto-ryū swordsmen are now hunted by disgraced feudal landlord Kagimura and his crew of killers. Manji, the immortal of the title, has his own problems, the most pressing of which is locating his missing arm.

Anotsu’s transformation from the blackest of black villains over the course of the series exemplifies Samura taking the long view with regard to his plotting. No-one introduced can be taken at face value, and even those who’re misguided or seemingly outright evil can earn our sympathy. That’s the case with Kagimura, who’s witness to the most shocking event in Scarlet Swords, in a superb piece of unpredictable storytelling. Elsewhere its Samura’s subtlety that’s admirable. One group of ill intent hatch their plans, all the while encompassing a couple of people whose allegiance we know well.

Perhaps there’ll be a feeling that as action is minimal, although spectacular when it occurs, Samura’s remaining art might be dull. Not a bit of it. We overhear a multitude of conversations, but Samura ensures they occur in interesting locations such as on a hill top, in delicately drawn woods, or picturesque villages. His visual characterisation has to be top notch, and it is. As if there was any doubt.

By the end of the book the object for almost everyone is to vacate the city and head towards a port. There’s only one main road to Satsuma, and nearly everyone seen in this book is on that road, meaning an awful lot of extremely dangerous people are likely to come into contact. The key cast are Anotsu and his surviving allies, and there’s a reason the next volume is titled Massacre. That’s combined with this in the eighth Blade of the Immortal Omnibus.