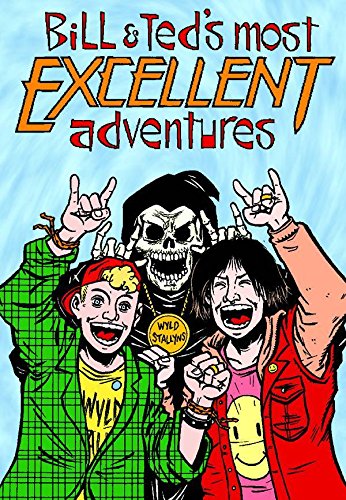 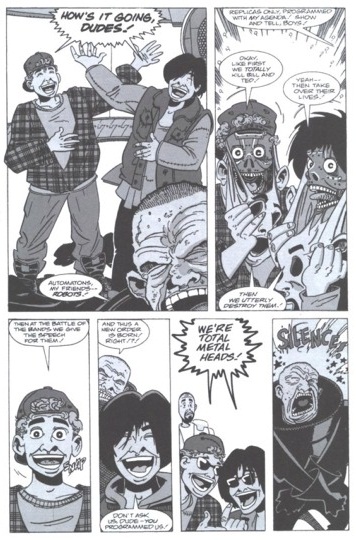 Marvel originally published Evan Dorkin’s cheerful extrapolation of Bill & Ted’s post-movie life, but a decade later Slave Labor Publishing split his run over two books. Given the quality of the work, that would have been good news were it not for Slave Labor being a small company unable to take the financial risk of presenting the material to its best advantage. Instead of full colour comic sized pages, this is a digest sized publication in black and white, which is disappointing.

When Bill & Ted first appeared in the cinemas in 1989, they chimed ideally with the times, just predating slacker culture with two likeable idiots spreading their ignorance through the past to earn a future. It had moments of comedy originality, but at the box office didn’t match Wayne’s World mining the same territory, and was based on so much that was current and faddish it hardly seemed constructed to stand the test of time, which only serves as an example of how difficult it is to predict what will. Bill & Ted continue to delight new generations of teens, and the first indication of success was a 1992 sequel, Bill & Ted’s Bogus Journey, an adaptation of which opens this collection.

Original editor Fabian Nicieza deserves considerable credit for recognising that Dorkin, then best known for the manic comic intensity of his one and two page Milk & Cheese strips, would be suited to more general offbeat comedy drama. In fact he’d already shown this with his Pirate Corp$ series (collected as Hectic Planet), and nails Bill & Ted from the start, despite never seeing their first film. His 72 page adaptation of Bill and Ted’s Bogus Journey was of an early script, so several scenes absent from the eventual film are included, with happenings on the way to the hardware store the longest sequence cut from the film. Dorkin’s storytelling and art improves throughout, but this remains the most excellent movie adaptation promised on the original cover, the cast likenesses impressions rather than exact. The biggest change is the movie’s decision to cast Death as an Ingmar Bergman pastiche that flew well over the heads of their audience, although made him more expressive. In comics, a more traditional skeletal version within the robe serves just as well. Dorkin quickly became very enamoured of the gloomy character always slightly out of place or misjudging a situation, and it’s rare that he’d not feature strongly in stories reprinted in volume two. Death’s standout here is his decision to take a holiday. While he’s taking pictures of the destruction of Pompeii, the primordial ooze and the Hindenburg zeppelin exploding, the dead are returning to life in 1993.

The human characters Dorkin creates slot sublimely into Bill & Ted’s world from their incompetent cable metal show counterparts to more obvious targets like manager Lemmy Tellya and record company execs Flim and Flam. The more out there characters don’t work as well, with Time Thumb a neat visual joke, but a subplot dragged on too long, and there’s a definite Gremlins influence on the final story, the creative balance restored by the hilarious concepts behind numerous nightmare worlds.

While very entertaining in its own right, the stories here are Dorkin just getting his hand in, and volume two ups the quality. Or Dorkin’s entire run is now available in hardcover and in colour as Bill & Ted’s Excellent Comic Book Archive. 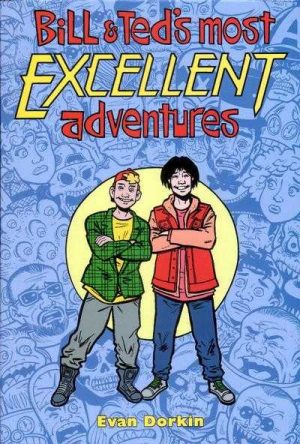 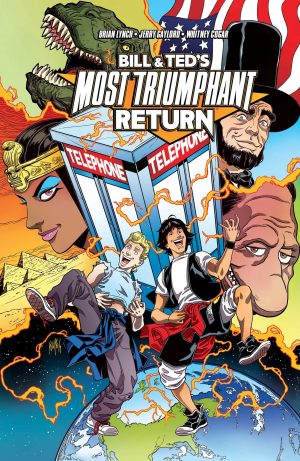 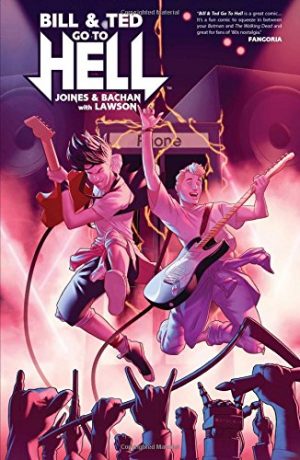