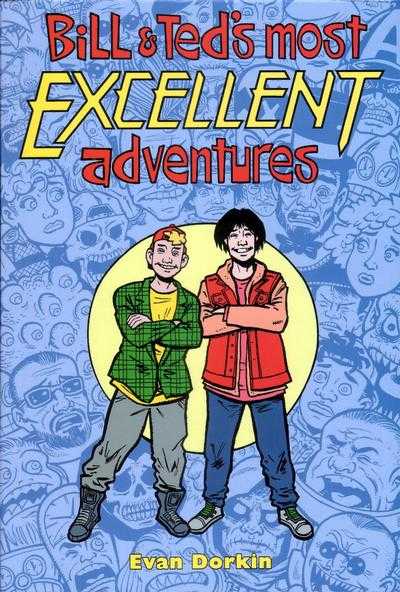 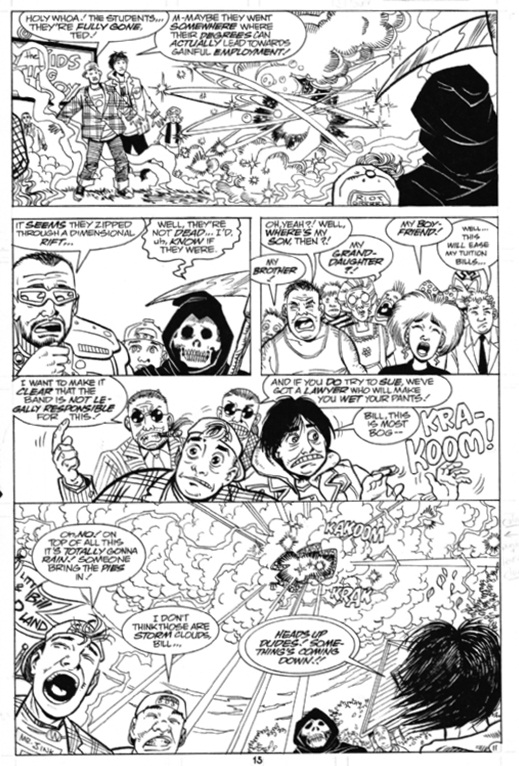 A second digest sized black and white collection gathers the final seven issues of Bill & Ted produced by Evan Dorkin in the early 1990s. The characters themselves are somewhat divisive, with some folk unable to see past what is being pastiched to the inventiveness, good nature and laughs beneath. Thankfully Dorkin gets that, and understands the cast from the genial idiocy of Bill & Ted themselves, to the megalomaniacal villainy of De Nomolos, his grandiose plans forever destined to fail due to his incompetence in choosing assistants. Dorkin’s favourite cast member seems to be Death, in his own way as incompetent as De Nomolos, but endearingly, Dorkin’s drawings making a hooded skeleton more loveable than you’d consider possible, particularly when he’s replaced.

Three chapters of Bill & Ted being held to account for meddling with the timestream open this selection, and perhaps the case for the prosecution is made by Dorkin including almost everyone who played a role in the two Bill & Ted movies in addition to his own cast. It’s an imaginative tour de force, the possible consequences continually escalating as the ridiculous situations pile up. At one point Dorkin just throws a random elephant into the mix, and his concept of the masters of time as goofy circular hovering faces is great.

The whole idea of Bill & Ted’s ignorance being almost all-consuming is taken to its logical extension when they discover during a Planet of the Apes marathon that Abraham Lincoln was assassinated, which comes as shocking news. Seeing as he’s a good friend, Bill & Ted determine to put things right. Other plots include Death being replaced by a younger, snottier version, and the chaos of a first anniversary wedding party, in which Dorkin comes up with neat explanations for both Bill & Ted’s success and how their foul-ups were rectified. The only story that doesn’t work is a superhero parody, which is nicely drawn, and has a point, but doesn’t justify the effort Dorkin put into designing so many new characters. Generally, though, given the amount of characters and detail Dorkin throws into every story, that they were completed on a monthly basis is astounding, and Dorkin would never again be as prolific for comics. The series did earn an Eisner Award nomination, but voters in 1992 thought Groo the Wanderer was funnier.