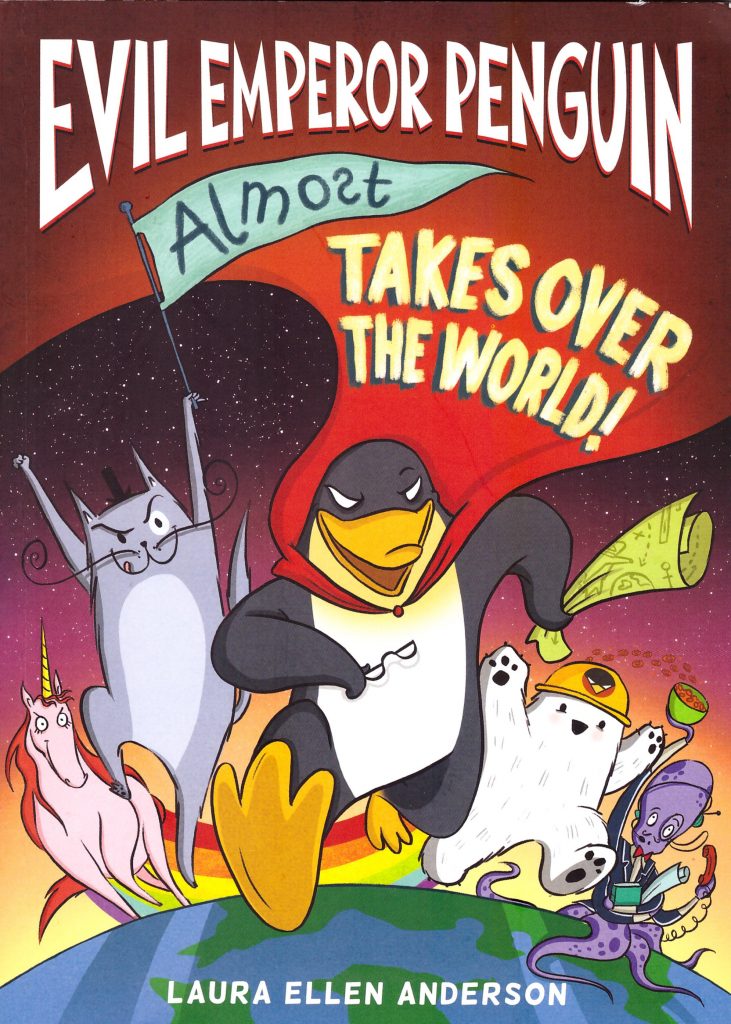 There’s a persistent good cheer about Evil Emperor Penguin, despite a premise of Evil Emperor Penguin being a criminal genius who wants to take over the world. His blindspot is not realising that his chances would be immeasurably improved by investing in henchmen who were a) in some way competent, and b) broadly shared his evil intentions. Instead Laura Ellen Anderson plays with the bathos of his being surrounded by incompetents with caring personalities, the cutest being chief minion Eugene.

Anderson has a developed sense of the absurd, making each of Evil Emperor Penguin’s plans more preposterous than the last. “This is going to be my best invention yet!”, he announces, before continuing with “by connecting all of our electronic services and potatoes, and then turning them all on at once, enough energy will be created to form a portal into space!” Better still “all the world leaders will get sucked into the portal off into space and I shall rule this whole planet myself!”. This is accompanied by an illustration of potatoes attached by a string of fairy lights to fridge, toaster and vacuum cleaner. Other plans include turning humans into marshmallows, circulating bins that eat people and travelling back in time in order to claim responsibility for every single invention and important discovery humans love. If it’s not the incompetence of his helpers thwarting Evil Emperor Penguin’s plots, there’s his rival Evil Cat ready to throw a spanner in the works.

It’s the funny individual ideas that carry the strips, as there’s otherwise a repetitive formula at work, most content consisting of a plan or device that goes wrong, and while Anderson’s art works with her stories it’s simple and functional. Occasionally there’s a departure from the formula, such as Evil Emperor Penguin’s talent show, or a version of A Christmas Carol, which is a highlight. New characters also make an appearance, the best of which is Evil Cat’s new minion Flegburt, a surreal variation of Eugene.

Overall there’s a consistency to Evil Emperor Penguin, offering plenty of giggles for kids at his stupidity, and while adults are likely to giggle less, they’ll still have some laughs.