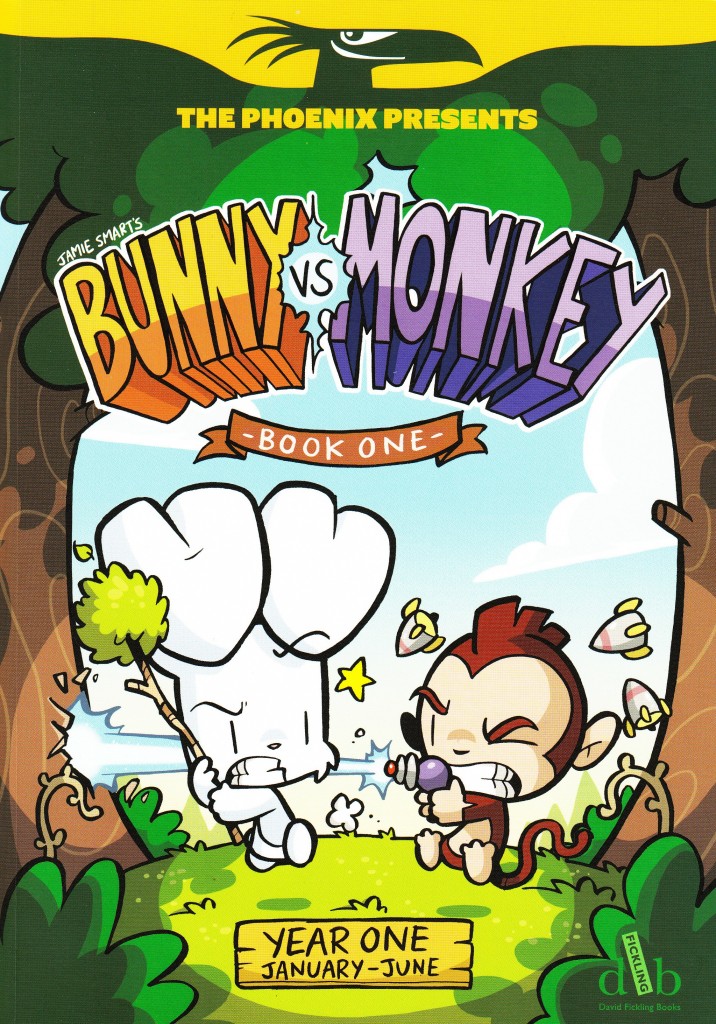 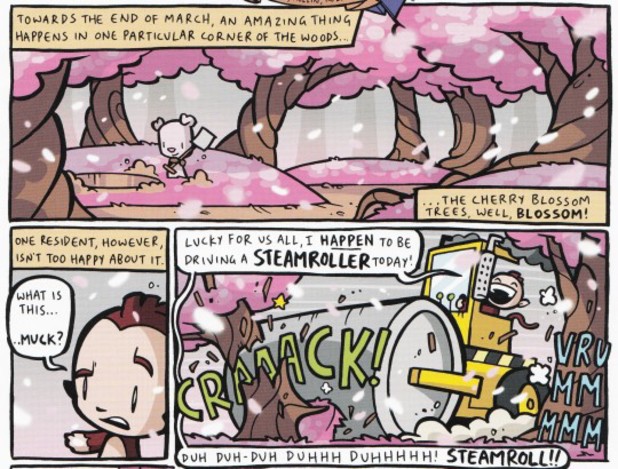 Concocted with gleefully gentle mania by Jamie Smart, Bunny vs. Monkey has been a fixture in British children’s comic The Phoenix from the first issue; a madcap duel of animal arch rivals set amidst the idyllic arcadia of a more-or-less ordinary English Wood.

Constructed as monthly calendar spanning January to June, Year One begins with a prologue introducing placid, helpful Bunny and not-so-smart pals Pig and Weenie Squirrel. The idiotic innocents have found a hibernating bear and Bunny really wants them to stop trying to wake it up. Meanwhile, over the hill and not so far away, a bunch of boffins are attempting to launch a really annoying monkey into space. The proposed launch goes hideously awry and the obnoxious simian lands in the snow-covered glade and declares himself king of this strange alien world.

Monkey loves noise, strife, chaos and raising a rumpus – everything genteel, contemplative Bunny abhors – so when the apish astronaut introduces techno music to the sedate weald the lines of battle are irrevocably drawn. Thing escalate when Skunky – an inventor with an insane line in animal-inspired terror weapons such as the Cluck Cluck Zeppelin or giant metal robot hands which give destructive Monkey ‘Fists of Furry’ – opts to operate on the Dark Side beside the sinister simian.

As new cast regulars slowly appear they pick sides – or sides pick them – whilst more mechanical monstrosities and Weapons of Meadow Destruction debut and disastrously crash out: devious devices such as Frog-O-Saurus or Pig-O-Tron 5000 which Monkey soon learns to dread. However when a bewildered former stuntman turns up the artful anthropoid is happy to leave all the dangerous stuff to Action Beaver.

Endlessly inventive, sublimely funny and outrageously addictive, here’s something parents will beg their kids to read to them. Bring on Book Two.