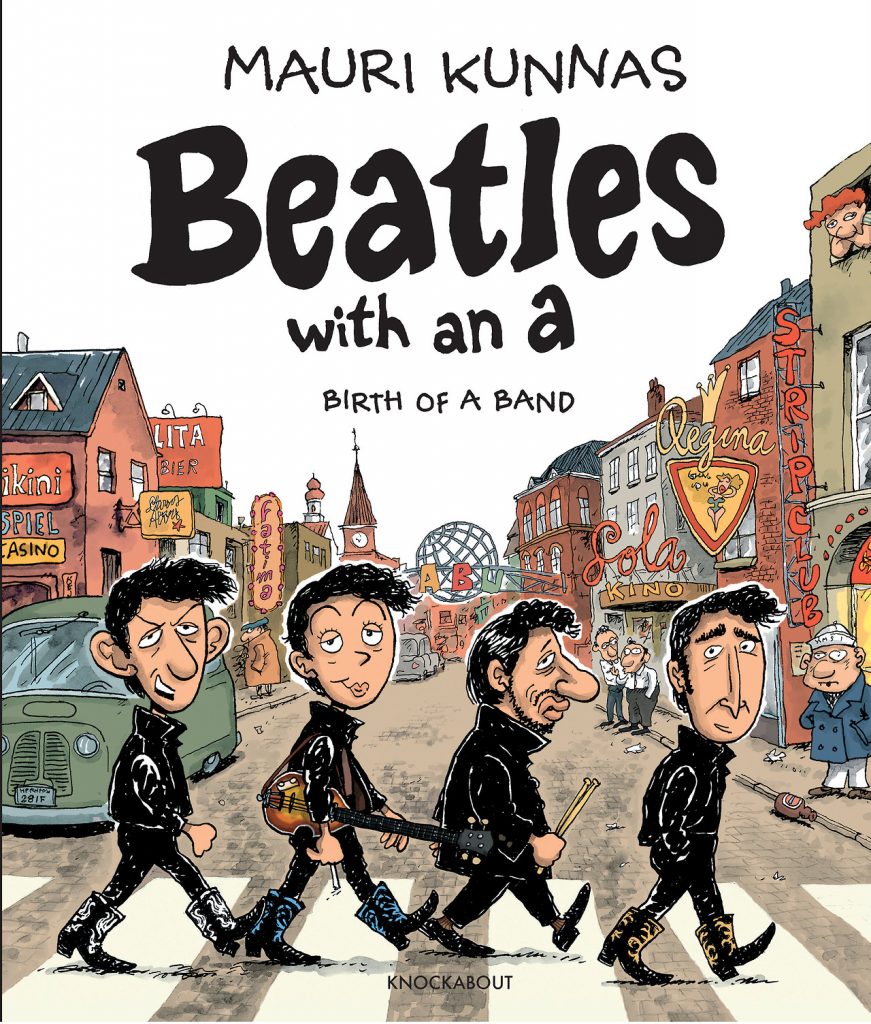 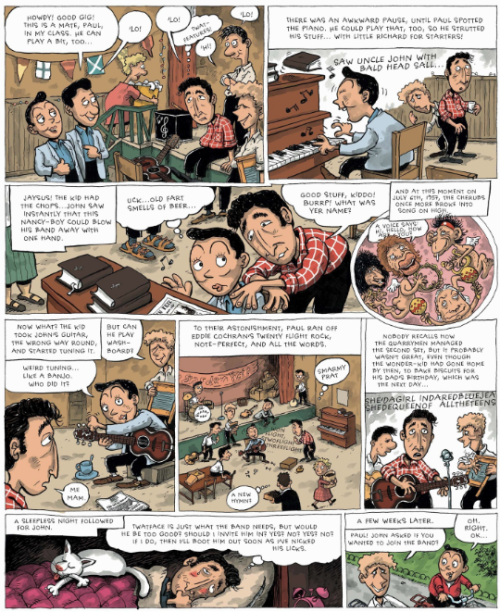 It wouldn’t be an unreasonable reaction to look at the cover to Beatles With an A, realise that Ringo Starr apart, Mauri Kunnas isn’t great at cartoon likenesses of the Beatles, and dismiss the book. What a mistake that would be. More representative of the quality on offer is the smart gag of recreating their iconic Abbey Road album cover picture, but when the Beatles were younger in Hamburg’s sleazier district. For purists, include the back cover continuation and you’ll find Pete Best and Stuart Sutcliffe as well. In exploring the childhoods and early days of the Beatles. Finnish artist Kunnas packs the pages with his lively cartooning, offering an impeccable reconstruction of days gone by in a country not his own.

This is far more impressive than it might at first seem, and speaks to considerable research into the styles of furnishing and fashions of 1950s Britain, all the way down to school uniforms and children’s toys. It’s partly due to such diligence that Beatles fans who didn’t live through the era themselves can be transported back in time to John Lennon’s youth more efficiently than via any text biography. However, don’t take everything as gospel, since Kunnas uses some dramatic licence, and provides some cringeworthy puns. He also works in some very funny asides, such as the forlorn specimen hanging around the Hamburg strip club converted to a bar as the owner expects to make more money. “No point in waiting Otto”, he’s told. “No more titty shows. Understand?” Another nice touch is casting the Rolling Stones as prophetic angels just ahead of important moments, and an incredibly lively Rory Storm is also great.

No-one can accuse Kunnas of slacking off anywhere, as the effort is immense. A panel occupying a third of a page showing the Beatles playing a club in 1960 features the band in silhouette and 58 different looking people dancing or standing around the club. A similar workrate applies throughout as Kunnas brings every location to glorious life, and to the detail of the writing, from which all but the most dedicated fans are going to learn new nuggets. He also brings out some interesting perspectives. One is Beatles manager Brian Epstein and future producer George Martin meeting for the first team, each impressed with the other’s urbane presentation, then following that with an alternative version of the meeting. Either or neither might have been true.

Kunnas leaves the Beatles in the recording studio just about to lay down Please Please Me, the song that really established them. He’s made the years of struggle more fun to read about than they must have been to live through, but engages on every level. Beatles With an A is cheery, dense and offers lots of laughs. Kunnas followed this up with a Rolling Stones project, which would also be welcome in English.