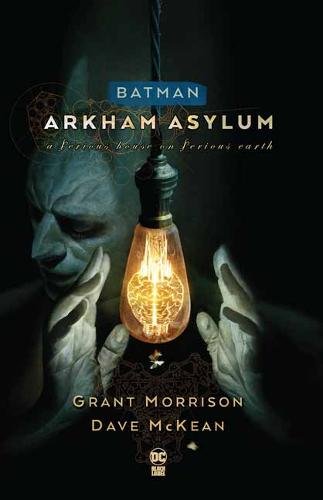 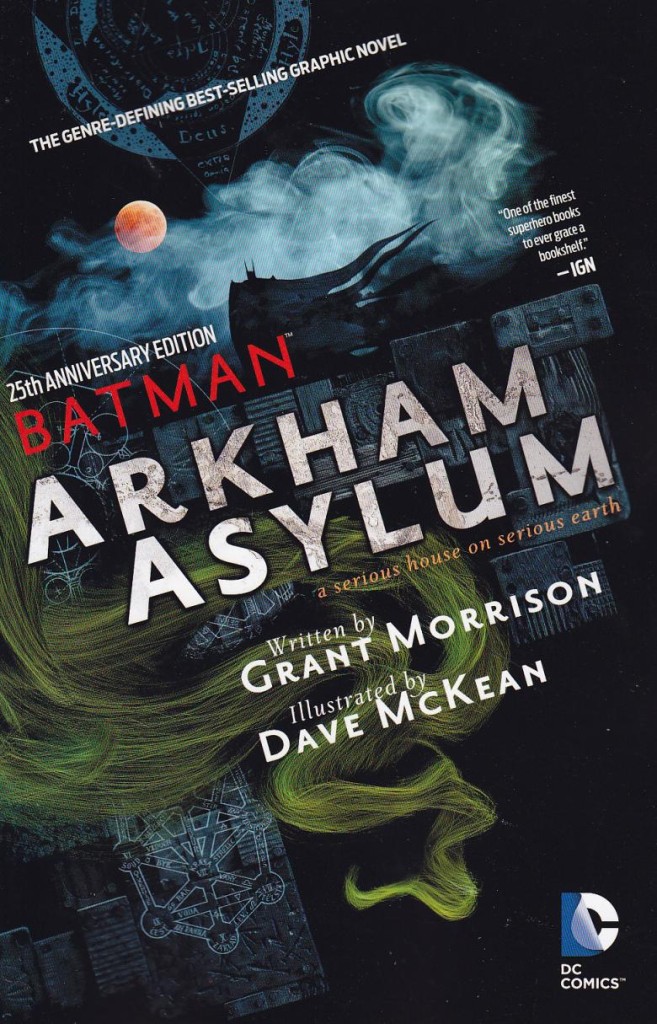 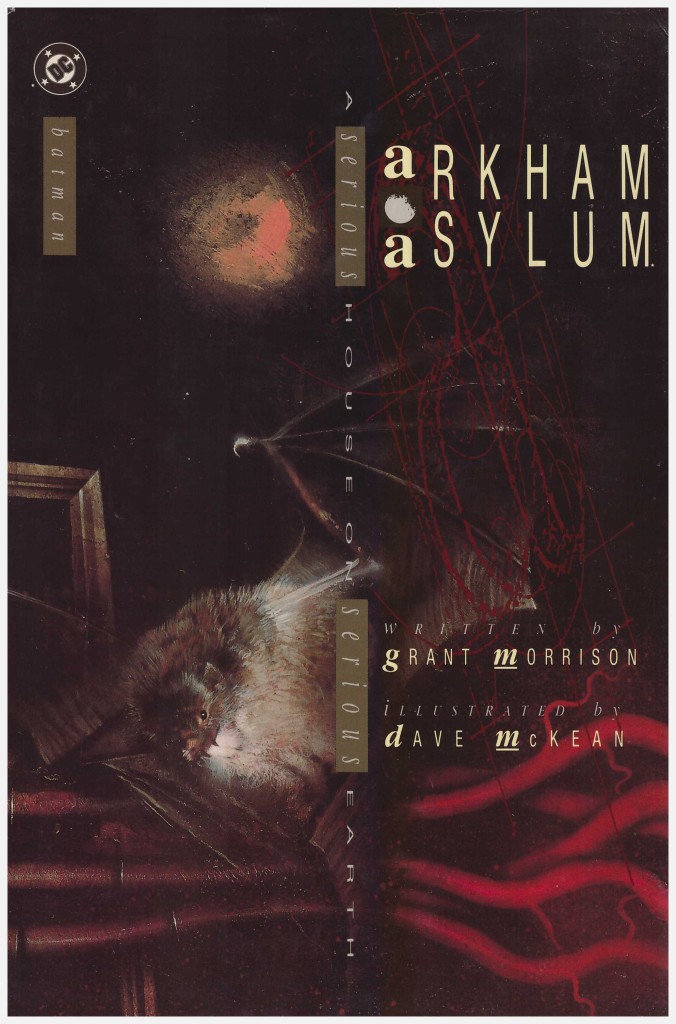 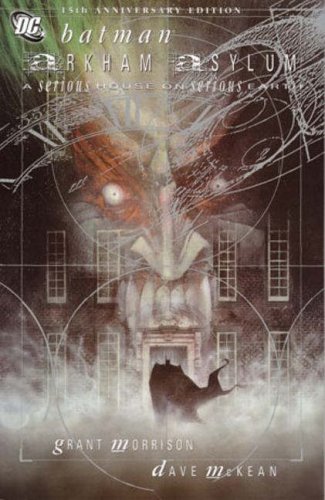 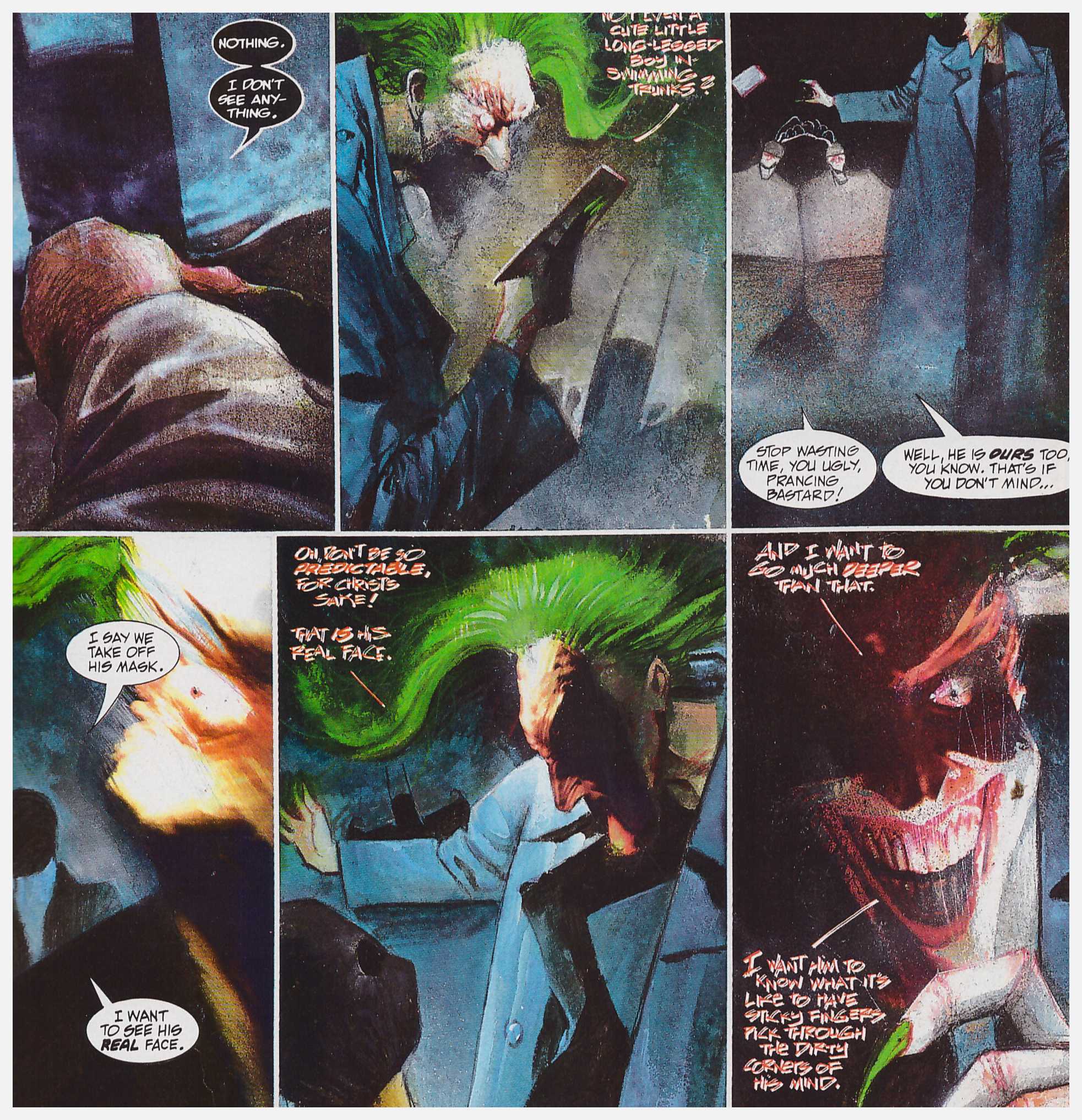 When originally released in 1989 Arkham Asylum received reviews considering it a heavyweight project destined to sit alongside the Dark Knight/Maus/Watchmen holy trinity of the fledgling graphic novel market. A tagline plastered vertically down the cover of the original edition reads “A serious house on serious Earth”, thus weighting expectation before the cover’s even cracked even without knowledge of the Philip Larkin poem it’s taken from.

Now familiar to those well beyond graphic novel readers, Arkham Asylum is the repository for Batman’s foes considered insane. Batman is summoned with the inmates in control, and confides a fear that his determination and compulsion may be a form of insanity. Many years later Grant Morrison would deliver an excellent extended dissection of Batman and Bruce Wayne, but as the starting point of a psychiatric exploration here, the notion is unconvincing narrative convenience.

Once inside Arkham, Batman must handle a succession of foes in whom Morrison has little interest, yet who occupy numerous two page spreads in which they spout pretentious, hollow dialogue. An exception is a nine page, near silent stalking of and confrontation with Killer Croc, yet that’s for a strained St George analogy. Much else appears to happen for no good reason. Why would Batman force a shard of glass through his palm before facing the inmates? It comes across as meaningless shock. The two villains that do interest Morrison are the Joker, well portrayed as a demented master of ceremonies, and Two-Face. He supplies an interesting analysis of both. Batman’s journey into the heart of Arkham is paralleled by that of the asylum’s founder, whose horrific experiences shred his sanity. His defining transformative moment is accompanied by images of a cuckoo clock. Really.

There are thought provoking ideas buried within some complete nonsense, but they’re frequently poorly conveyed. The most recent printing includes Morrison’s footnoted script, detailing the inspirations and symbolism bestowing Arkham Asylum its depth. It sheds much light, but if the nuts and bolts of a story require this type of explanation it’s been poorly executed in the first place.

Dave McKean’s art is both brilliant and frustrating. His swooping and pouncing rendition of the Joker, created prior to Jack Nicholson’s film portrayal, is the first modern era depiction, presented in vivid green and translucent white as a personification of caprice. The silent reptilian presence of Killer Croc is terrifying, and the Mad Hatter is brilliantly portrayed as a changing sequence of wrinkled British comedians, representing the hallucinogenic quality of the smoke filled atmosphere he inhabits.

However, for many of the opening pages McKean deposits fragmentary images over meaningless backgrounds. Are the vertical panels for a horrific sequence where Batman learns the lunatics have taken over the asylum meant to resemble a film strip? If so, why? It’s not a sustained device. Too many other pages emphasise space in this manner, yet it serves no narrative purpose. The individual images are finely painted, but often hinder the story.

In the years since 1989 Morrison has become a major writer fulfilling the promise of his earlier imaginative work while McKean produced few further comics before deciding his artistic inclinations lay elsewhere. Arkham Asylum, though, is the Emperor’s new clothes. It isn’t poor because it’s experimental, it’s poor because the experiment failed.

This is, though, a divisive book with many cultured and articulate adherents, so if intrigued you’re directed to the 25th anniversary edition. It includes Morrison’s annotated scripts, some of his visual breakdowns, and a wealth of McKean’s associated art.