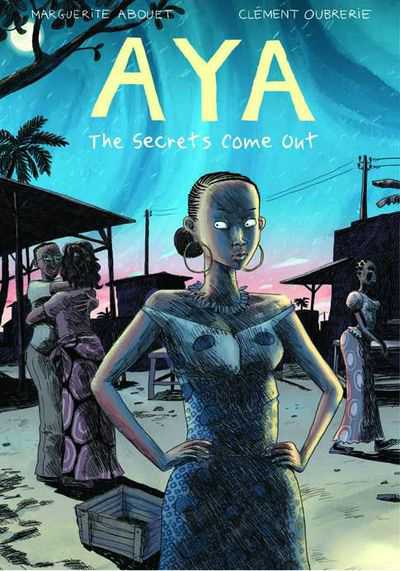 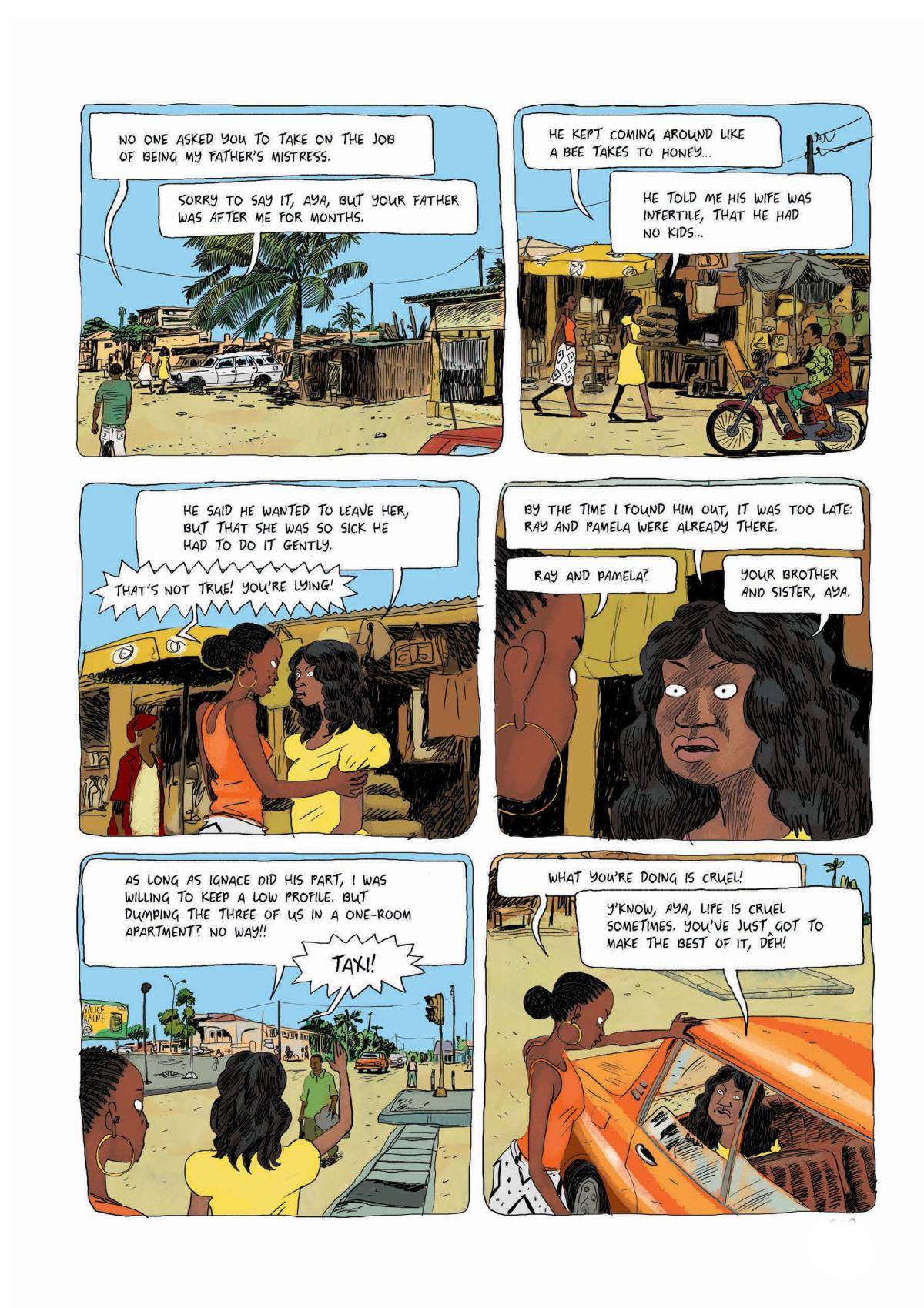 It’s been apparent from the beginning that Marguerite Abouet plots her engaging drama as one long story over three chapters, each running over a hundred pages, which means for a complete understanding Aya isn’t a series to be dipped into randomly. Some scenes in individual albums appear to have little purpose, but the pay-off does come. It arrived for Aya’s father Ignace in Aya of Yop City’s final pages. In Aya he was furtive about the needs of his new job, and the suspicions of readers were continually raised in the sequel until his “secretary” turned up at the family home accompanied by two children who recognise Ignace as their father. The Secrets Come Out picks up the story.

However, Abouet and artist Clément Oubrerie don’t begin there, but with the final preparations for the Yop City pageant, and poor besieged tailor Sidiki and hair stylist Innocent, or Inno, amusingly styled as Thriller–era Michael Jackson. When it’s reached, the scenes dealing with the surprise arrival are beautifully handled. Of Ignace and Fanta’s family only Aya is old enough to understand the implications. Her younger siblings happily accept the new arrivals and play with them, while Ignace’s attempts at further deceiving his wife represent the poor attitudes of men toward women seen throughout. While that’s certainly not exclusive to Abidjan, Abouet not offering a single credible alternative man suggests she considers it universal there in the early 1980s. She does have women point out the double standards, although not all are sympathetic.

Oubrerie brings the cast and locations to life as he has done over the previous stories, and will do over the remainder, sometimes using a full page packed with life. He keeps the cartooning simple, but expressive, and an artistic highlight is the Miss Youpogon beauty pageant with all the accompanying petty jealousies and bitchy comments.

Abouet has a nice line in those, and by the end of the story poor behaviour has been seen to have consequences, but the attitudes really feel like stepping back into another era, whereas the previous two volumes were more or less timeless. There’s also a hint of where her writing would head later with a short comedy sequence featuring Aya’s infant sister Akissi, and other events include a funeral, the mystery of who Albert is meeting at night and Bintou’s continuing naivete. Once a couple of mysteries are revealed, somewhat clumsy and unnecessary flashbacks provide more detail, but The Secrets Come Out ends with multiple characters having important decisions to make. One addresses a lack of tolerance even worse in Africa than in the Western world.

The final pages are great, composed of single panels completing the stories of each important cast member. It’s difficult resist the charm of Aya and her friends, and avoiding becoming wrapped up in their lives is equally futile, so this supplies a neat conclusion to a consistently engaging comic drama.

This album is also incorporated in the bulkier Aya: Life in Yop City graphic novel, along with the two that preceded it, and that provides better value and is now more readily available. Three further individual albums followed in France, but in English were only released in the combined edition Aya: Love in Yop City. 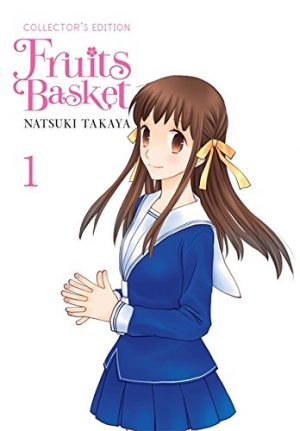 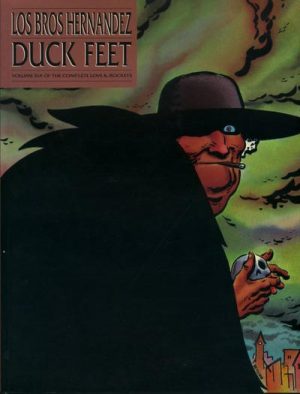