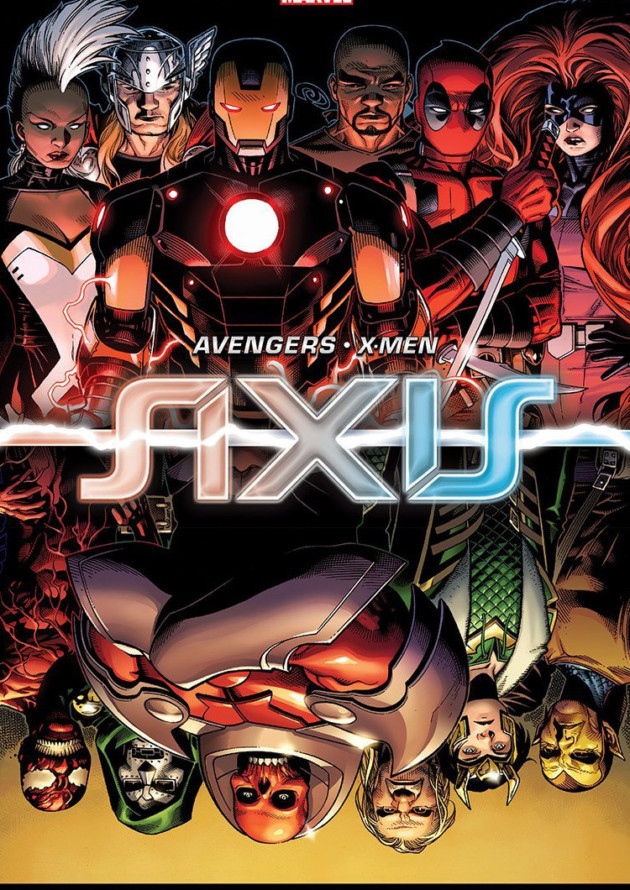 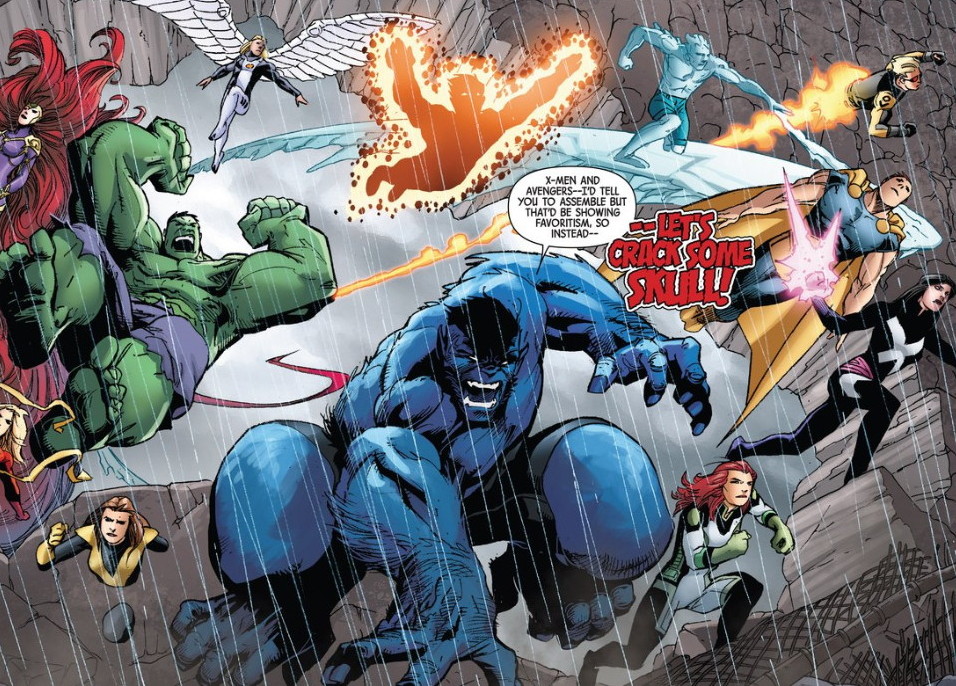 Axis has its origins in Rick Remender’s Uncanny Avengers series, the last volume of which was titled Axis Prelude. In that series the Red Skull grafted the immense psychic talents of Professor X to his festering ideals, enabling him to influence his surroundings to a far greater degree than previously. It’s difficult to discuss this book without spoilers, which begin in the third paragraph. For those not wanting to know, the short review is that Axis has an interesting idea entering in the fourth chapter, but overall it’s a monstrously padded, with the better concepts submerged beneath constant fight scenes. What should be top of the line artists Adam Kubert, Leinel Francis Yu, Terry Dodson and Jim Cheung appear rushed. Consistency was never a consideration with that selection, but Cheung at least is excused by what appears to be a deadline saving final chapter inked by an army.

Remender has excelled in plotting Uncanny Avengers, but beyond the broad canvas here Axis is padded and dragged down by his lack of a natural facility for bantering dialogue. It’s often awkward and occasionally feeble, such as in the opening chapter when the core X-Men team turn up to rescue Cyclops. This is a great shame, as when he’s being less forced with his writing, Remender’s insights are decent: Iron Man in chapter two is an example.

The driving force of the initial chapters is the Red Skull with Professor X’s brain, now transformed into an alternative version of the immensely powerful Onslaught. It appears he can’t be defeated in conventional fashion, so attempts are made to convert his attitudes by magical means. An unfortunate side-effect for all super powered characters in the vicinity is that it reverses their moral compass, so heroes become villains and vice versa.

That’s a decent concept to work with, but on balance Remender’s poor execution drags it down. Is the literalism of the Hulk declaring himself to be Kluh a good idea? In some places it works well, with the reformed villains proving more interesting than evil Avengers and X-Men, but decent ideas are swamped in the endless battles. One is Loki being able to make use of Thor’s hammer complete with it’s proviso the bearer be worthy. The ending is inconclusive, with some characters seemingly remaining altered. With the benefit of hindsight, though, the shock value is removed by the knowledge that the Secret Wars event of summer 2015 would throw everything into the air.

Overall a better solution might have been to have presented the opening three chapters as part of Uncanny Avengers, reducing Axis itself to six chapters with a clear starting point, and have them all drawn by the same artist. A companion volume Axis: Revolutions has a bunch of short stories about what the cast do with their moral compasses reversed.