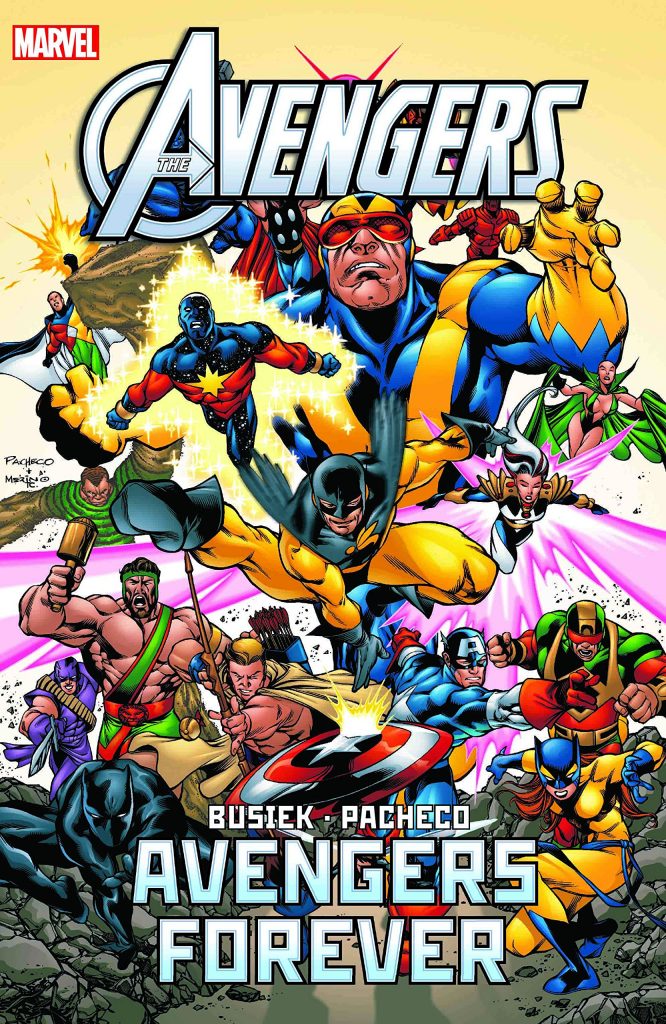 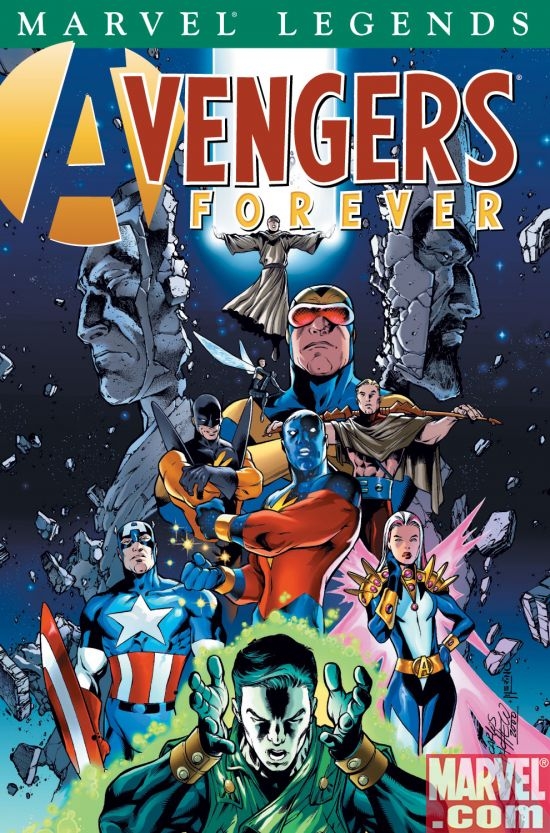 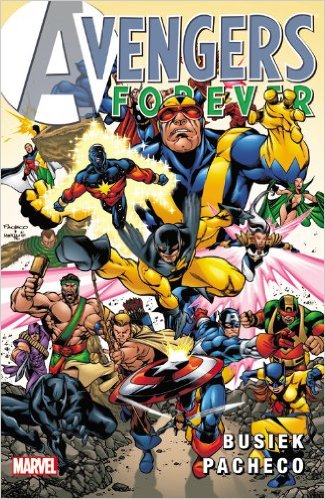 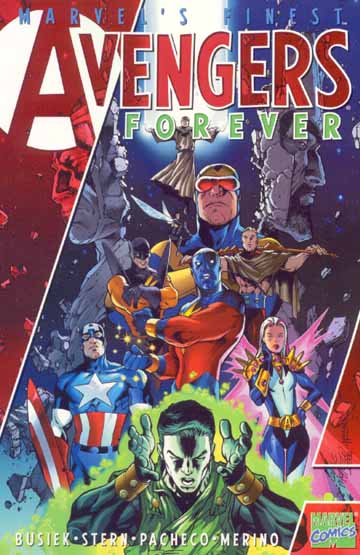 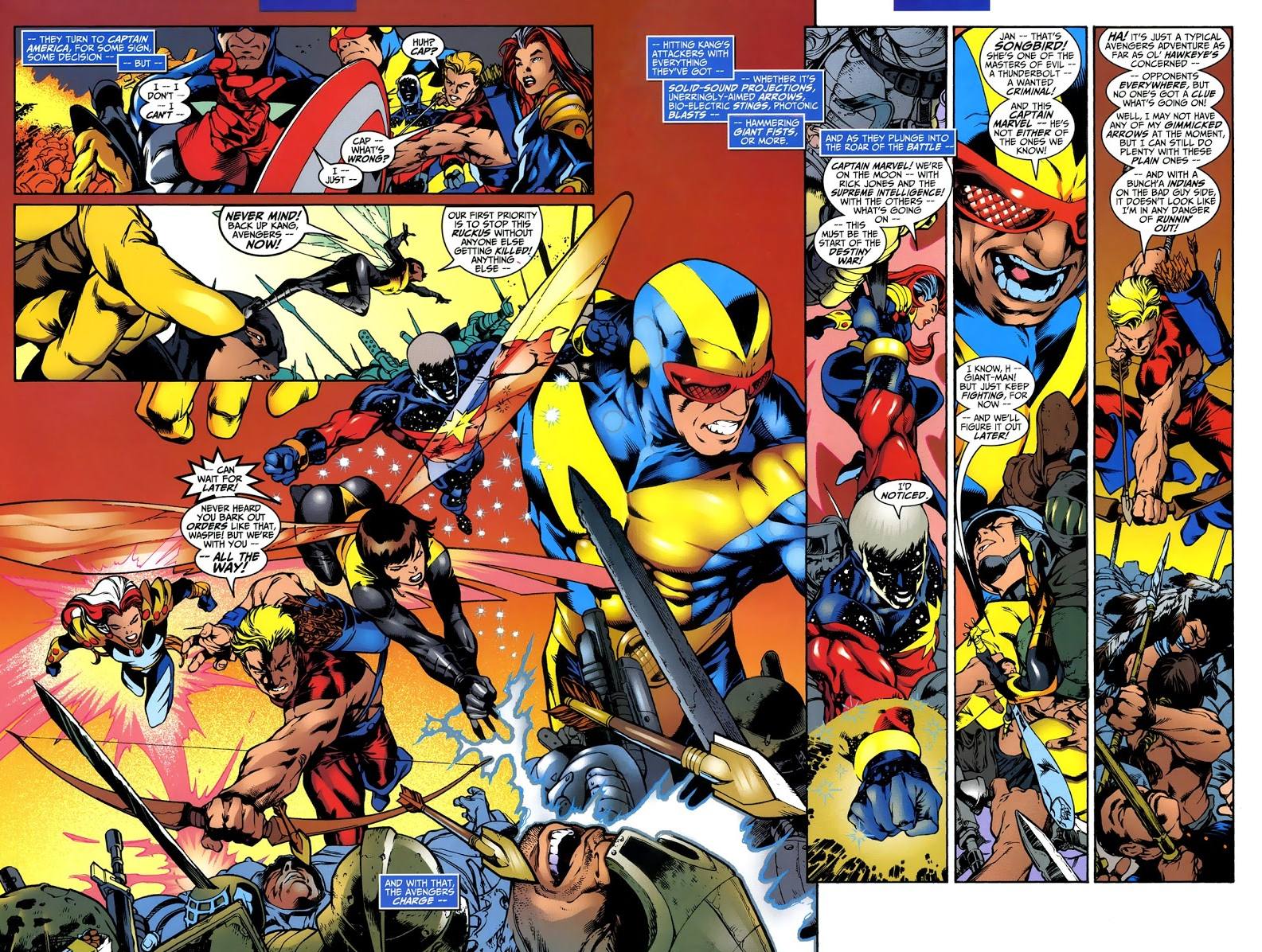 Avengers Forever was born of Carlos Pacheco’s desire to work on an Avengers project with Kurt Busiek, and Busiek’s feeling that such a project should exist largely outside the regular continuity of the monthly Avengers comic. Published in 1998 and 1999, the story features a motley collection of Avengers past (Yellowjacket, Hawkeye and Captain America), present (Giant-Man and the Wasp) and future (Captain Marvel and Songbird) attempting to thwart a plot by the Time-Keepers and Immortus, Master of Time, to destroy Rick Jones, confine humanity to the planet Earth and wipe out a variety of divergent timelines. The Avengers, to their surprise, are assisted by Libra of Zodiac, the Kree Supreme Intelligence, and Kang the Conqueror.

The art is impressive. Pacheco is clearly working on a project that enthuses him, and the inks of Jesús Merino (here beginning what would be a long partnership with Pacheco) suit his pencils and complete a very attractive package. The pages are rich in detail, and a long time can be spent simply looking at all the characters and the little touches added.

This richness is also to be found in Busiek’s script, on which he was aided by long-term Avengers writer Roger Stern. He crams in many characters from across the Marvel Universe, making it a delight for long term Marvel fans, for whom the source notes included will be very useful. Songbird fits well with the Avengers, making it a shame that she’s not joined the team for real since. Busiek uses the series to undo  knots in Avengers continuity, and that of Kang, and to resolve contradictions – a lot of the time when  the Avengers were told something that contradicted a previous understanding, it turns out it was a Space Phantom lying to them. Busiek even manages to incorporate the 1950s Avengers.

Avengers Forever is also apparently Busiek’s way of reconciling himself to the Avengers stories of the 1990s, the time when the Vision and the Scarlet Witch had their world taken apart, and Iron Man was a murderer. Busiek’s own stories rejected the values of the 1990s Avengers, but here he finds a reason for the worst moments of those days – the machinations of Immortus.

Avengers fans who hate Busiek’s nostaglia-filled approach will really, really hate this. The story is obsessed with past continuity, and flashbacks abound. Two chapters are essentially extended narrative expositions, as a single character explains the reality behind past continuity. And the story is more than a bit derivative of both Roy Thomas and Neal Adams’ Kree-Skrull War and Steve Englehart’s Celestial Madonna. It is also certainly true that this is not a comic for the neophyte Marvel reader, as it’s likely they will be confused and overwhelmed by the weight of past continuity.

In general, though, Avengers Forever is highly regarded and sold well. It continues to be repackaged, most recently over two editions of Hachette’s Ultimate Graphic Novels Collection, and within the vast Omnibus edition otherwise collecting Busiek’s Avengers collaborations with George Pérez. And this is not a bad judgement on its quality.