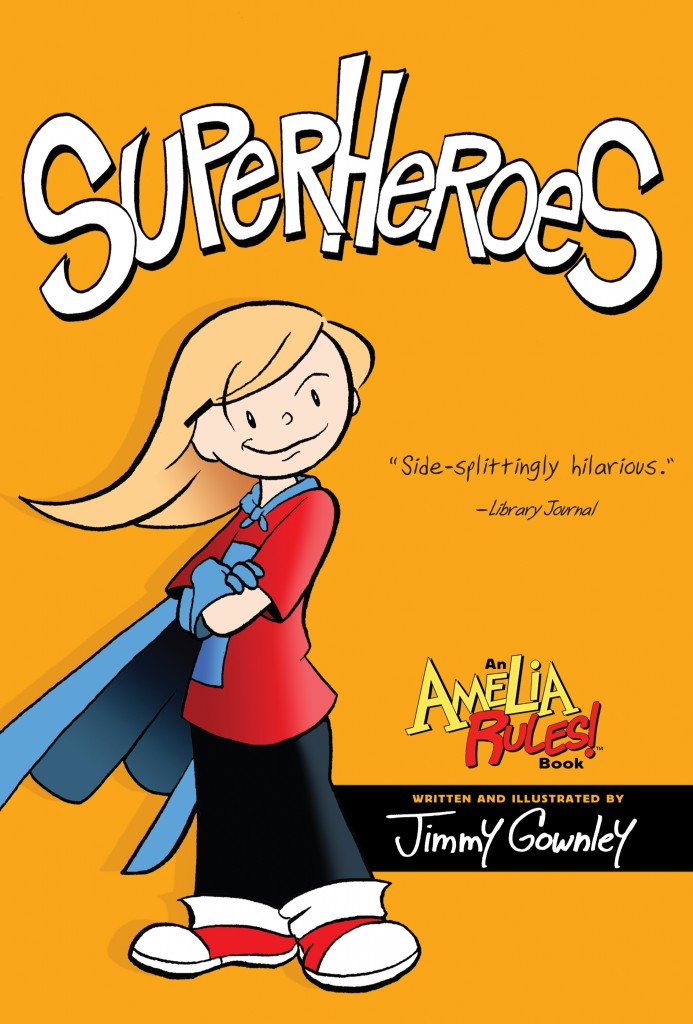 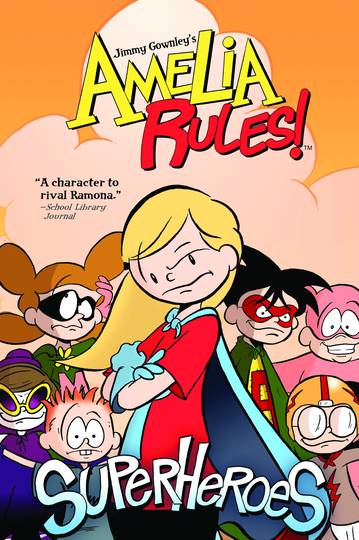 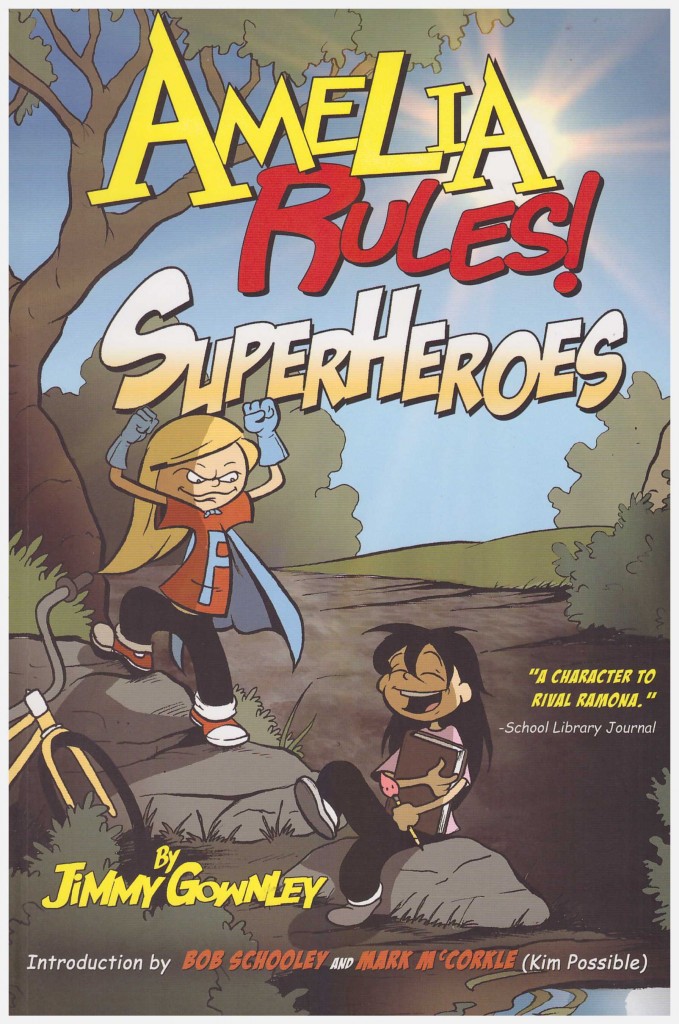 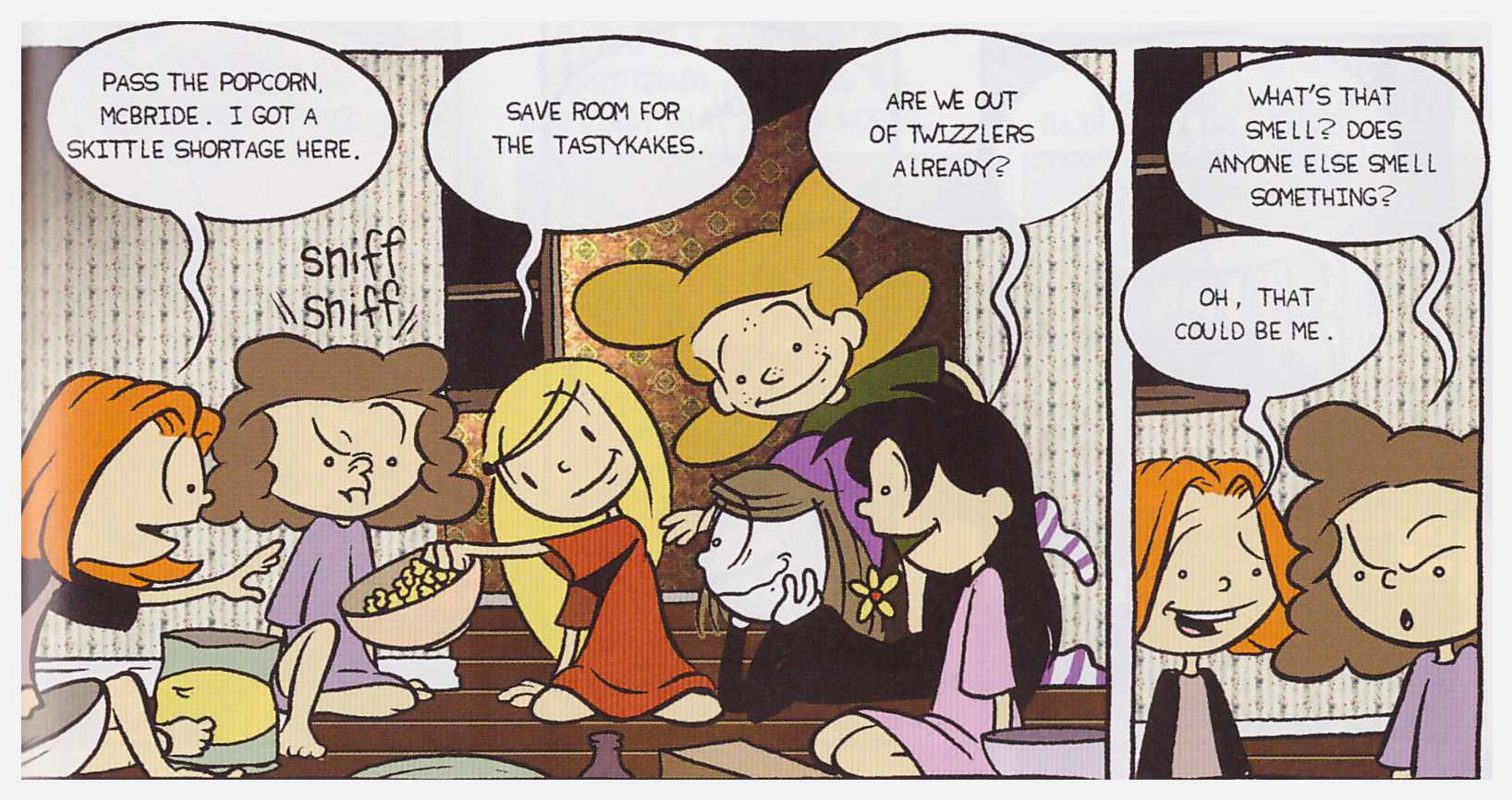 If there’s any kind of message behind Amelia Rules! it’s that if children become upset, they’re more astute than assumed in picking up on problems, but they also have a greater resiliency than some might believe. That, of course, doesn’t address how the accumulation of childhood hits produces the adult, but in Superheroes Jimmy Gownley takes a slight detour to cover that as well. He’s not shied away from the problems of childhood to date (The Whole World’s Crazy), but Superheroes cranks them up considerably to adult level.

In one sense the volume title is a misnomer. The background plot is the farcical situation of Reggie and his superheroes and the Park View Terrace ninjas mixing it up, but the real superheroes are probably elsewhere. Amelia has larger issues to consider.

Having integrated into her new environment a year previously, Amelia learns that another move is on the cards. Gownley eventually solves that problem in a typically clever piece of plotting, sleight of hand increasingly becoming a technique he masters. Her circle of friends does widen, though, now incorporating girls who produce their own zine, with Amelia especially impressed with a fantasy story about Princess Trishara combating the Shadows. It turns out there’s more to that than she realises.

In addition to avoiding a sugar-coated world of childhood by introducing life-threatening problems, Gownley also turns his attention to the cruelty of children themselves. A game of Truth or Dare takes an unpleasant turn, with Rhonda and Amelia coming off the worse for it.

As ever, Gownley’s cartooning is expressively superb, and his pastiches in this volume include Reggie imagining himself as Miracelman, Reggie as Archie, and a sequence mimicking the illustrative style of Understanding Comics. These are no head-scratching diversions, but seamlessly incorporated. Some will get the joke, others won’t, but it doesn’t matter.

Continuity isn’t an essential element of Amelia Rules!, but Gownley does build upon what’s previously been introduced. The passing of an old relative in What Makes You Happy delivers a plot thread here, and characters introduced here play a larger part in When the Past is a Present.