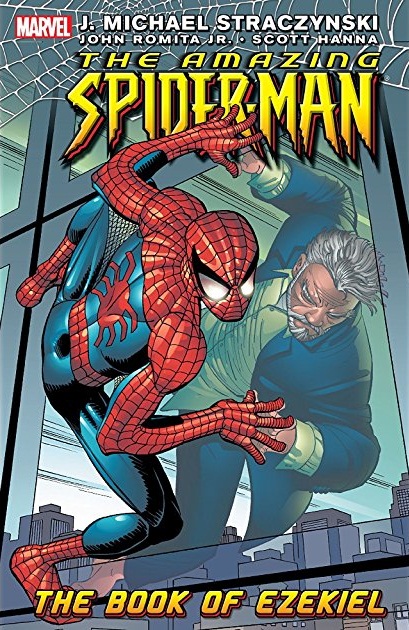 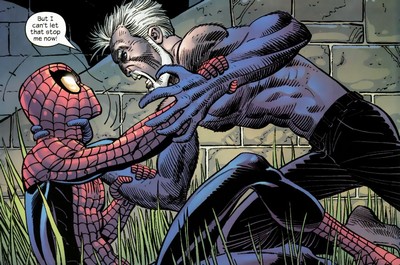 J. Michael Straczynski’s Spider-Man run hit a skid patch during the Unintended Consequences and Happy Birthday collections, with the previously flat-lined top-level material dipping slightly. The book of Ezekiel is a return to top form, and sadly the swansong for penciller John Romita Jr and inker Scott Hanna, who’ve been outstanding throughout.

Ezekiel was introduced in the earliest of Straczynski’s stories, his first appearance collected in Coming Home. Possessing similar abilities to Spider-Man, but older and more experienced, he heads a multi-billion dollar company, and to this point has acted as mentor to Peter Parker as he learns his Spider-Man abilities may not have been the random gift they assumed. The tone of his assistance alters in this collection’s main story as the threads weaved throughout the series as to how and why Peter Parker became Spider-Man tangle together. Who Ezekiel is and how he became that man is fundamentally related to what Peter Parker has become and how he uses those abilities. The mystical elements of the story and the philosophical musings may not be to all tastes, supplying a complexity not generally associated with Spider-Man, but it’s a unique and, yes, visionary, interpretation of a perhaps overly familiar icon, and how often does that occur?

Prior to that there are two other tales, very different in tone, but equally good. The forced alliance of Spider-Man and malign Asgardian God of Mischief Loki occurs when a manifestation of chaos is unleashed on Earth. This seeming mismatch works rather well, with Straczynski playing off Loki’s arrogance, sidelining his deviousness and delivering an altogether fascinating portrayal. Then there’s the type of story at which Straczynski has excelled, placing someone at the centre of a seemingly intractable dilemma with Spider-Man’s intervention pivotal. This is counterpointed with Mary Jane’s experience of returning to Hollywood.

The entire collection can also be found in Amazing Spider-Man by JMS Ultimate Collection volume 3, and the hardbound collection The Best of Spider-Man Vol. 3. Sins Past follows.