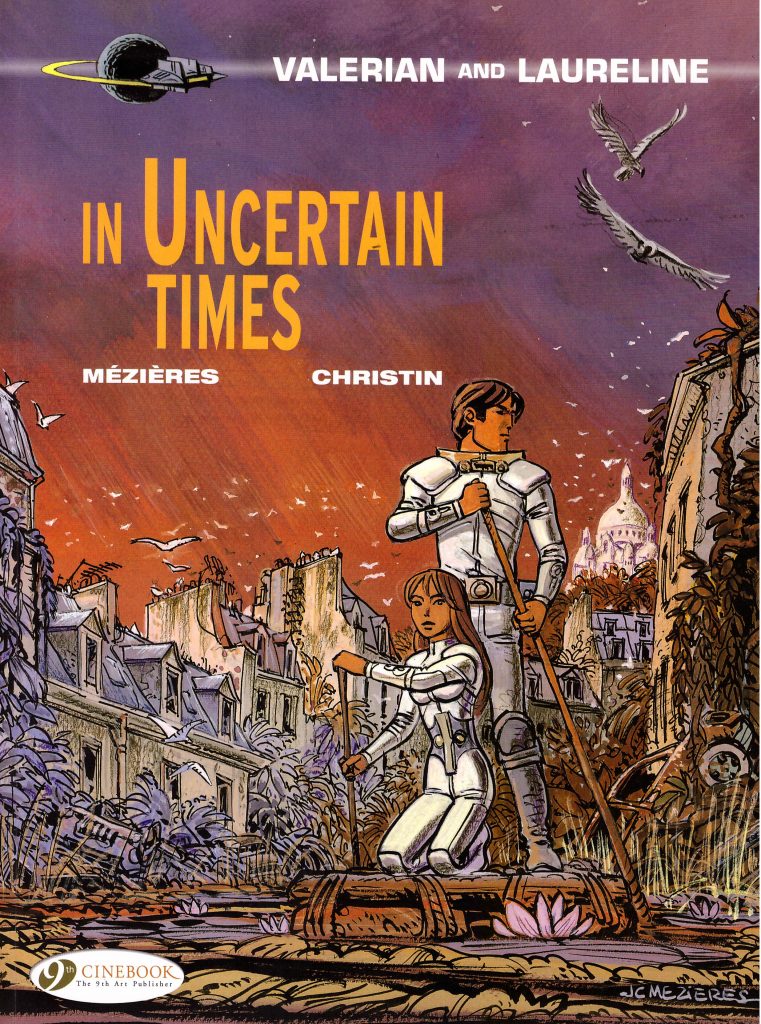 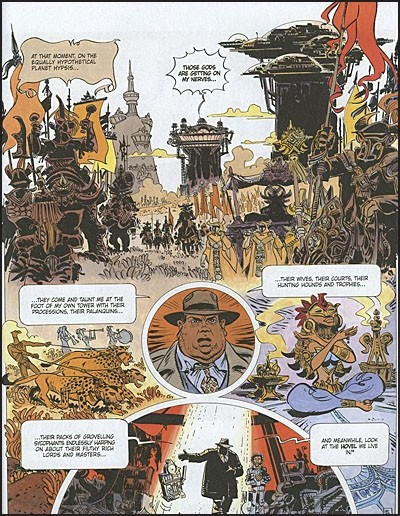 The Valerian and Laureline books produced during the 1990s were a mixed bunch, ranging from excellent to tired in places, but In Uncertain Times started the 21st century well. The interesting aspect is that it does so by accentuating recurring characters and devices, one aspect that made the previous Orphans of the Stars less than sparkling. Pierre Christin also returns to familiar territory by satirising the greed, conceit and moral redundancy of the capitalist system stirred to perfection by the devil.

He starts, however, with a wistful Valerian mooning over the loss of Galaxity, the human based civilisation he was born into, before becoming a Spacio-Temporal Agent to preserve that society. In the end, he played a large part in wiping it from existence (see The Wrath of Hypsis), although the trinity ultimately responsible return here, displeased with humanity’s genetic tampering. Most other returning characters take smaller roles.

It’s not a valedictory run through, but the sheer volume of familiar characters, locations and objects makes In Uncertain Times seem that way to begin with, yet they’re all worked into a cohesive plot. Carping about returning scenarios is a hollow criticism considering Christin kept up a run of sparkling originality for so long. American writers thrive on recycling, with new ideas at a premium, but they usually explain the past a little better. Anyone trying this as their first Valerian and Laureline book is going to end up thoroughly confused, despite Cinebook attempting a diagrammatic preface to explain the story paradoxes.

Jean-Claude Mézières seems to be enjoying himself drawing familiar characters, although some stretch so far back into the series that the modifications in his style become apparent. The script enables a couple of paintings showcasing alternate versions of the future, but otherwise it’s business as usual. The Gods of Hypsis may be able to achieve almost anything, but anyone other than Mézières illustrating Valerian and Laureline still falls into the realm of the unimaginable.

Is it necessary to point out the differences between Christin’s approach to solving the problems in his plots and that of most other writers? If so, this is a fine example. Most of the book is spent bringing together some immensely powerful people with firmly held and differing convictions. Anywhere else this would lead to a massive punch-up. Not here, yet the ending’s no less satisfying for that.

It’s not giving away too much to note that while complete in itself with a satisfying and longer than usual story, In Uncertain Times is also very much a prelude to At the Edge of the Great Void. It’s a process applied to the next few albums, which are connected by the greater purpose of bringing the series to a close. This prelude reveals the Gods have a system not too far removed from storing data on a memory stick and tucking it away in a desk drawer, and having discovered that, Valerian and Laureline are prepared for their next adventure.