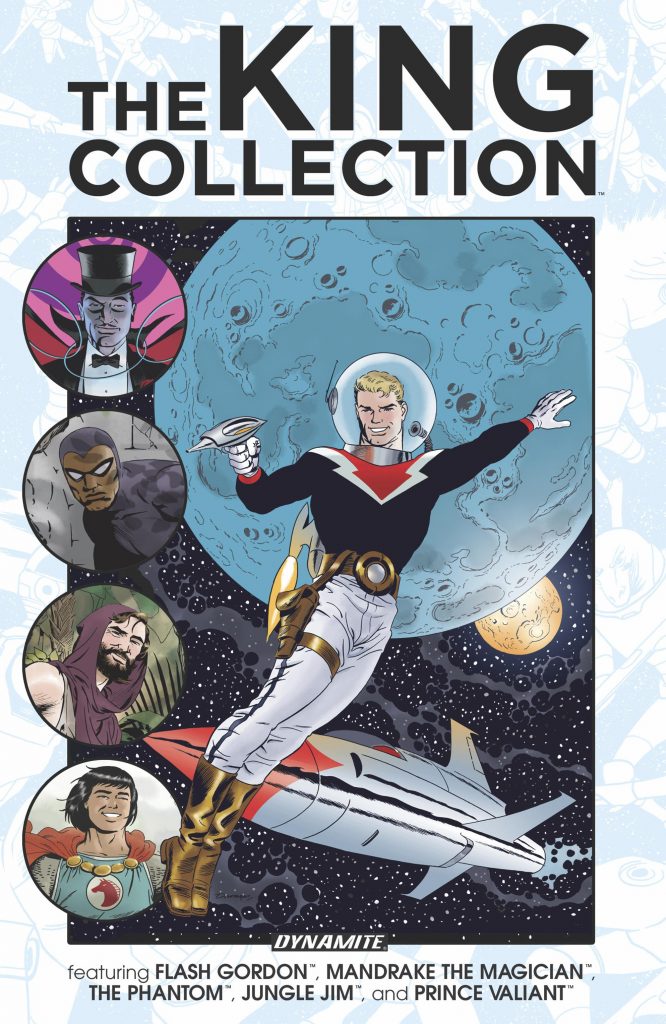 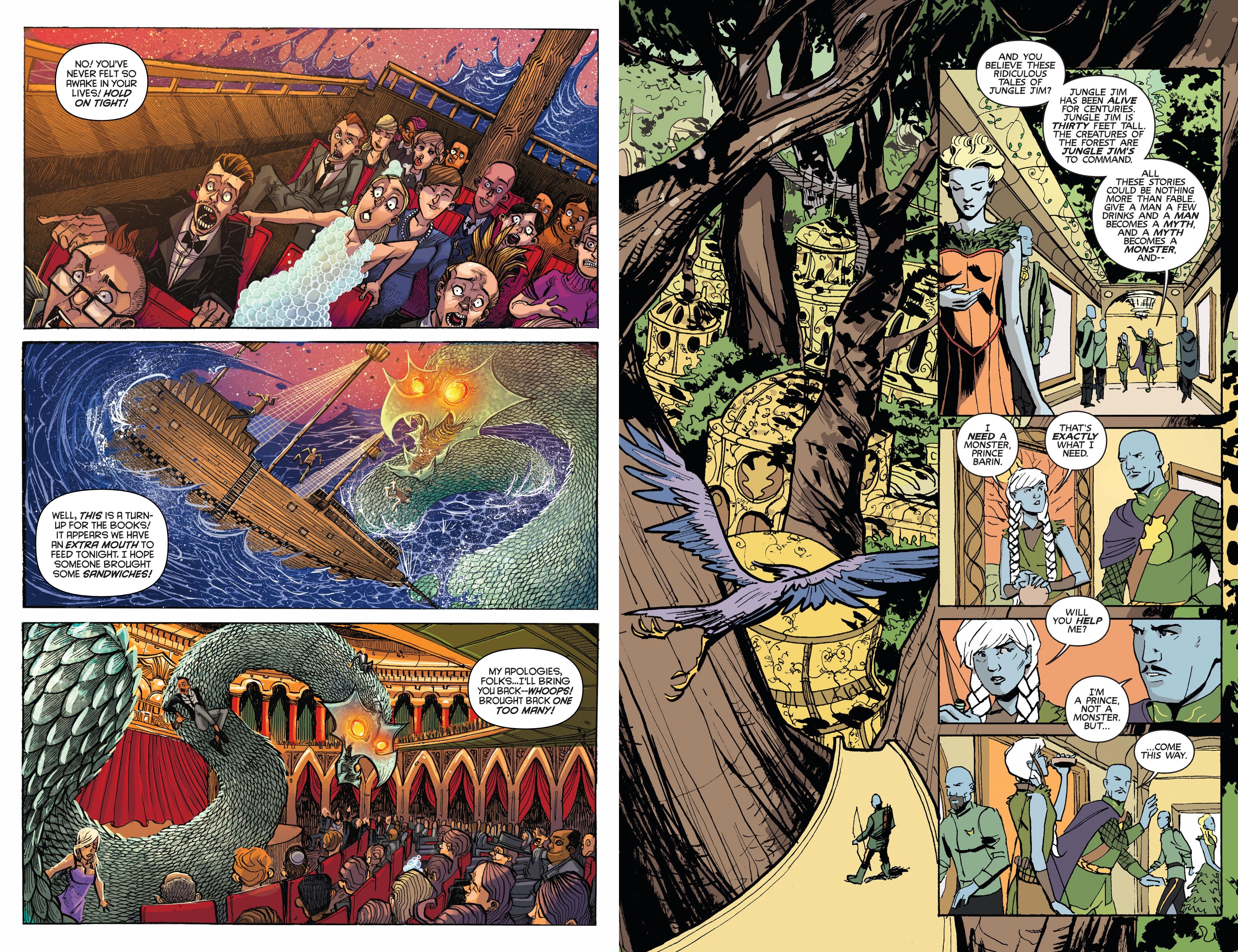 The King Features Syndicate has for decades been the primary source of newspaper strip distribution and licensing in the USA, and the adventure heroes they distribute feature in this massive collection. Dynamite dabbled with the characters in The Last Phantom and Kings Watch, with the latter introducing a form of continuity by uniting Flash Gordon, Mandrake the Magician and the Phantom along with their associates. These solo adventures pick up after that, have connecting threads, and Jungle Jim and Prince Valiant are added to the mix.

Flash Gordon, Dale Arden and Professor Zarkov are travelling through space, having earned the enmity of Ming the Merciless. The writing team of Ben Acker and Ben Blacker depict Flash as a likeable goon and supply a light comic touch to his adventures, with Lee Ferguson showing promise as an artist.

Mandrake’s adventure is one of the book’s two highlights. Roger Langridge and Jeremy Treece (sample art left) grab the attention from an early visual delight of Mandrake showing just what he can do, and continue for a complete thrill ride. Langridge provides the often aloof Mandrake with an achilles heel, a threat he can’t fully let loose on, and an apt line in misdirection. Treece’s quirky cartooning is not far removed from Langridge’s own art, and light years from Mandrake’s staid conformity, but sadly only for the opening two chapters. Felipe Cunha is also very good, but makes no attempt to match Treece’s style. By the end Mandrake is changed, and set up for the future.

Due to a nice twist in Kings Watch, the Phantom isn’t the same person as seen in The Last Phantom, but someone more appropriate. Brian Clevinger’s initial idea of them learning on the job, while searching for the person they believe should inherit the dynastic costume is interesting. However, he becomes sidetracked by introducing an undercover Phantom into a crime plot that could be about anyone before bringing matters on track again. Brent Schoonover’s tidy art offers first rate storytelling, so it disappoints that he doesn’t complete the story. Ryan Cody’s layouts are okay, but his Phantom is unappealingly chunky.

Jungle Jim has been completely reconfigured, as a guy in a safari suit probably wouldn’t cut it as a 21st century hero. Using the technology employed by Ming the Merciless, Jim has been first transported to a jungle planet under Ming’s control, then merged with the jungle itself. In practice it means he can transform into other creatures, surprisingly Earth like, and affect the environment. There’s a similarity to the Flash Gordon plot of an optimistic idealist causing havoc, but Paul Tobin’s likeable characterisation of the eccentric colonial Englishman, and Sandy Jarrell’s delightful cartooning raise it above, as does the surprisingly tragic element revealed midway through, and the great finale.

Prince Valiant shares a problem with Flash Gordon. In strip form both have featured stellar artists at the top of their game. Ferguson is better than the bland Ron Salas, but neither is near the same class of artist associated with the features. Nate Cosby’s purpose is to bring Valiant through time for a shock ending pointing toward Kings Quest. It might be considered that finishing a $50 472 page book (including over forty pages of admittedly admirable cover illustrations) and finding it doesn’t complete the story is sharp practice. At the least its very disappointing. You might be better off seeking out the Jungle Jim and Mandrake stories as the original comics, and forgetting about the rest.