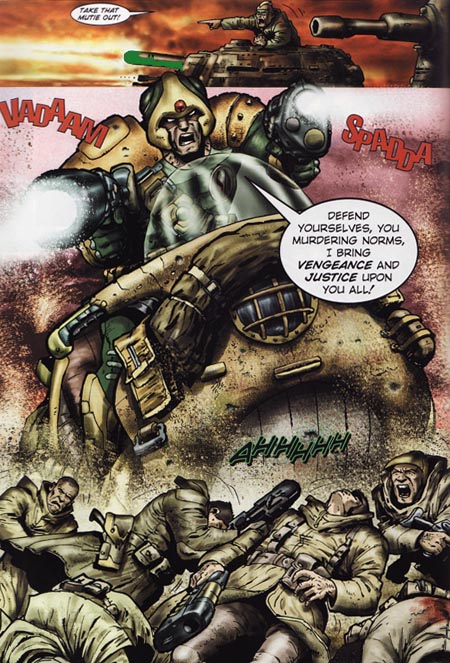 The Kreeler Conspiracy is graced with a Greg Staples cover, which, though lovely, could be misleading for anyone hoping for a new take on an old character. Instead we’ve got a reboot of a classic, with an introduction that’s dismissive of other versions of Johnny Alpha’s life. One can be fairly certain that John Wagner’s referring to the Alan Grant-written ‘The Final Solution’, which Carlos Ezquerra and Wagner refused to work on because they didn’t agree with killing Alpha. Hatchets have obviously been buried: Ezquerra’s back on art duties for this collection of three mid-length tales, all written by Wagner.

The introduction and title story present these tales as the authoritative account of Alpha’s life, an effect they try to reinforce with historical footnotes. Our story gets going when a ship Alpha is travelling aboard is hijacked by Kreelman militia, Kreelman being the hated right-wing head-case who tried to eradicate all mutants. Oh, and he’s also Johnny’s father. Ships that Johnny travels on are always being hijacked, so it’s down to business, with Johnny making a determined stand against superior numbers.

Throughout the story Johnny has a wrist-computer instead of an actual sidekick. The gimmick is used heavily at first and then seemingly abandoned. It’s little surprise that Wulf Sternhammer is also brought back from the dead for the next story. Wagner clearly realised that Johnny’s dry humour needed someone to bounce off.

The artwork, though not Ezquerra’s finest, has some nice panels, and his colouring has improved as he’s become more familiar with computer techniques and possibilities, but the plot itself is little to write home about. The Kreelers are going to bust their hero out of prison, but they hadn’t reckoned on Alpha messing with their plans, which seems a bit remiss of them given how often he’s done just that. Alpha’s father is suitably grim, and there’s some nice character touches, but he’s been used too often to be a real threat. Johnny’s an unstoppable force of nature, blasting his way through henchmen like a hot knife through butter.

Next up, ‘Roadhouse’, with black and white art that’s better than most of the coloured pages and gives the strip a retro feel that works in its favour. The story is classic Strontium Dog, an impression very much strengthened by the welcome return of Wulf. Johnny is tricked into a pan-dimensional device that gives both writer and artist the freedom to come up with as much bonkers nonsense as they want, for as long as they want, and calls to mind other similar Alpha adventures. Strontium Dog’s always been a strange mixture of sci-fi, sword & sorcery and spaghetti Western, and although this all would look a bit deranged to any first-time reader, it’s actually just covering old ground. In saying that, it’s always quite amusing and action packed, with enough plot to keep things ticking over just long enough so that the reader doesn’t realise they’re trapped inside a giant McGuffin.

The final story, ‘The Tax Dodge’, is largely played for laughs, and works well, though there’s a lot of plot squeezed into the final pages. Ezquerra can lay claim to some superb character designs (Alpha and Judge Dredd, to name but two) but with the villains in this story he’s really scraping the bottom of the barrel.

One imagines that taking Johnny back to his roots was a deliberate strategy, and there’s no denying the charm of these pulpy adventures told with such vim and vigour. If you like Strontium Dog, you’ll like this. If you don’t, there’s little here that’s going to change your mind. 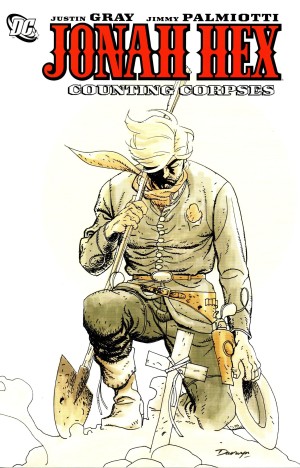