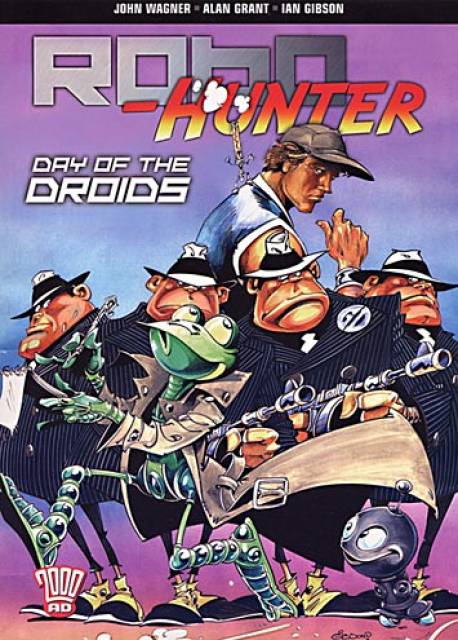 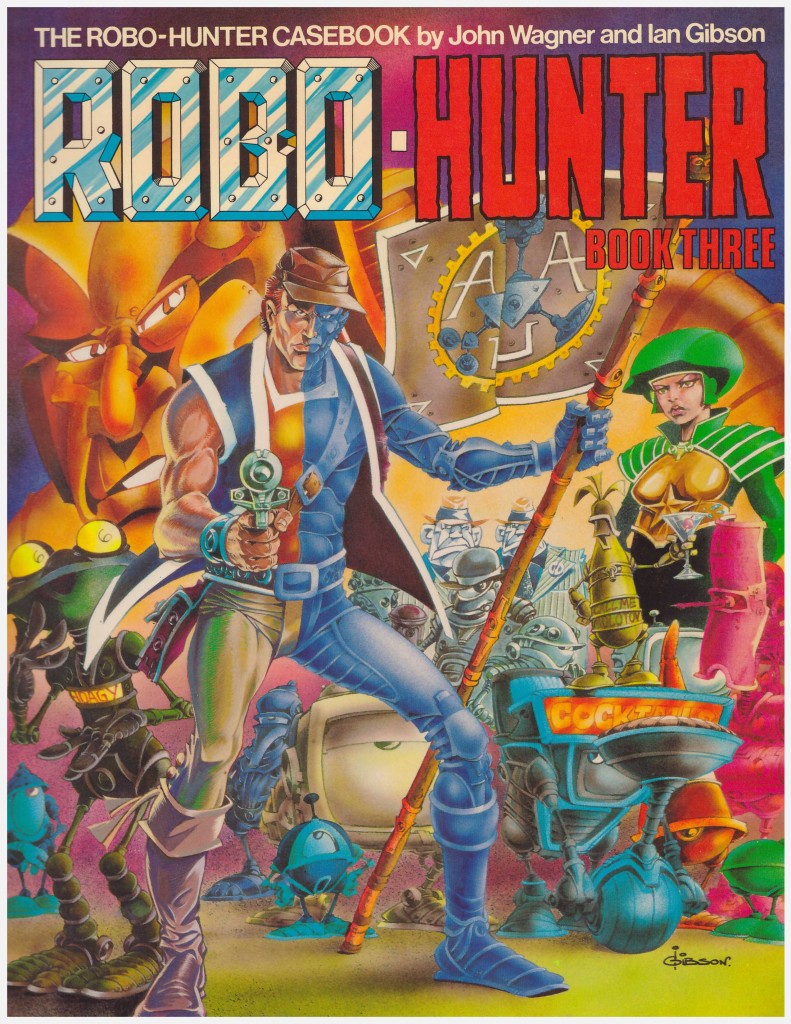 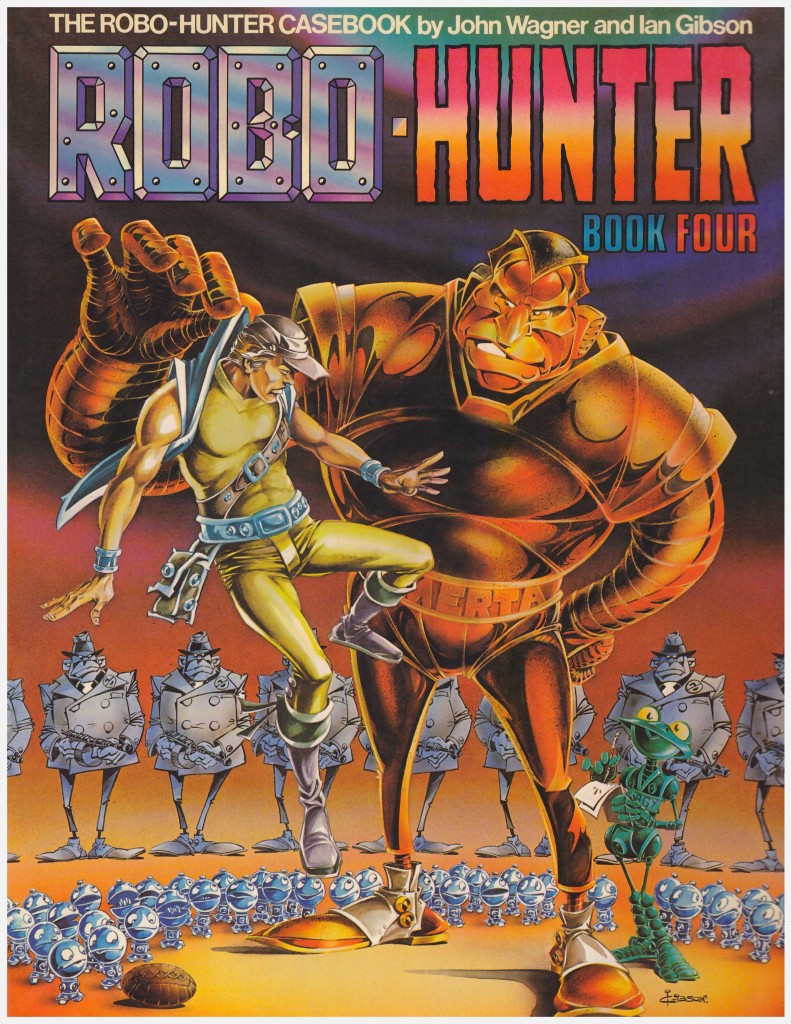 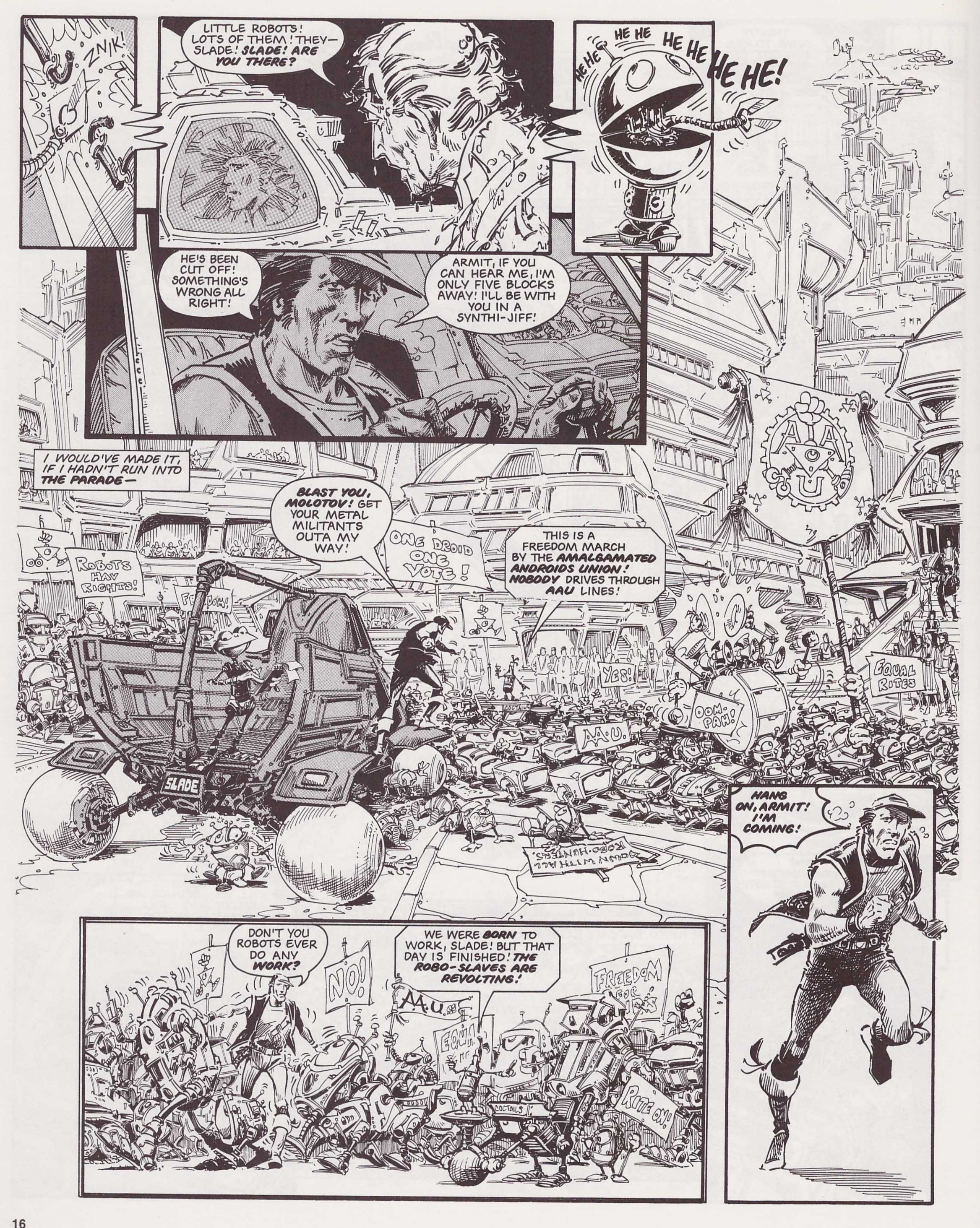 In 1978 Robo-Hunter was a fresh and exiting addition when what’s now collected as Verdus was first serialised in 2000AD. His second serial featured changes. For a start the powers that be determined that Slade perpetually smoking a cigar set a bad example, and so pages of Ian Gibson’s already drawn art had to be altered, giving Slade a strange pouting look in the early episodes. Sometimes, though, adversity breeds inspiration, and Carlos Sanchez Robo-Stogie was born, a walking cigar substitute. Also introduced was Slade’s idiot assistant Hoagy, John Wagner mining slapstick comic gold from Hoagy’s total inability to carry out the simplest instruction. The assistants would eventually undermine the feature by being more engaging than the lead, but for Day of the Droids the partnership prevails.

In his 1984 introductions to the original Titan Books collections Ian Gibson talks of how he occasionally let Robo-Hunter down as the pressures of drawing five pages a week in his intensely detailed style took their toll. He’s very hard on himself. When it counts, Gibson always comes through, his fertile mind again creating hundreds of improbable robots, and only rarely shirking on illustrating them individually. Just take a look at that sample page from early in the book.

Wagner again appears to be plotting on the fly, stringing matters along for weekly publication, but doing so much more fluidly than in the previous Verdus. Day of the Droids begins with the Amalgamated Androids Union protesting against Slade’s methods, moves onto city officials being replaced by robots, and from there, after some investigation and a spell in jail, to the meat of the story. This is a plot to take over the city by a robot organisation based on the Mafia, from which Wagner can indulge in his love of 1930s gangster material and create some fantastic gags. This equally applies a Roboland sequence featuring enough ideas to keep lesser creators in material for years, each segmented within five pages. Eventually the earlier chapters prove to have later relevance, indicating Wagner had an ending in mind from the start, and that’s a neatly plotted conclusion that snatches defeat from the jaws of victory.

This edition may be a smaller size than the Titan album editions that previously separated ‘Day of the Droids’ into two parts, but scores by also featuring ‘The Beast of Blackheart Manor’, not previously available in book form. For reasons clarified in the previous story, Slade needs to decamp to Brit-Cit (“Where the robots still say ‘Sir’”), and for reasons unclarified Alan Grant takes over the scripting and does a fine job. Slade’s investigation takes place at a hereditary stately home that’s fallen on hard times where guests are disappearing in their hundreds, but no corpses are ever found. Some very late censorship at the time of original publication results in a feeble ending, but Grant’s been adroit with the clues, and most readers will figure out his intention. Gibson’s on fine form, and so’s the feature as we head to Play it Again, Sam.

In most respects Robo-Hunter has dated very well. The setting on a world of robots ensures the visuals remain fresh until such a society comes about, the jokes are still funny and it should still entertain a 21st century twelve year old boy the way it did their 1980s counterparts. The entire content is now more easily found combined with Verdus in volume one of Robo-Hunter: The Droid Files.