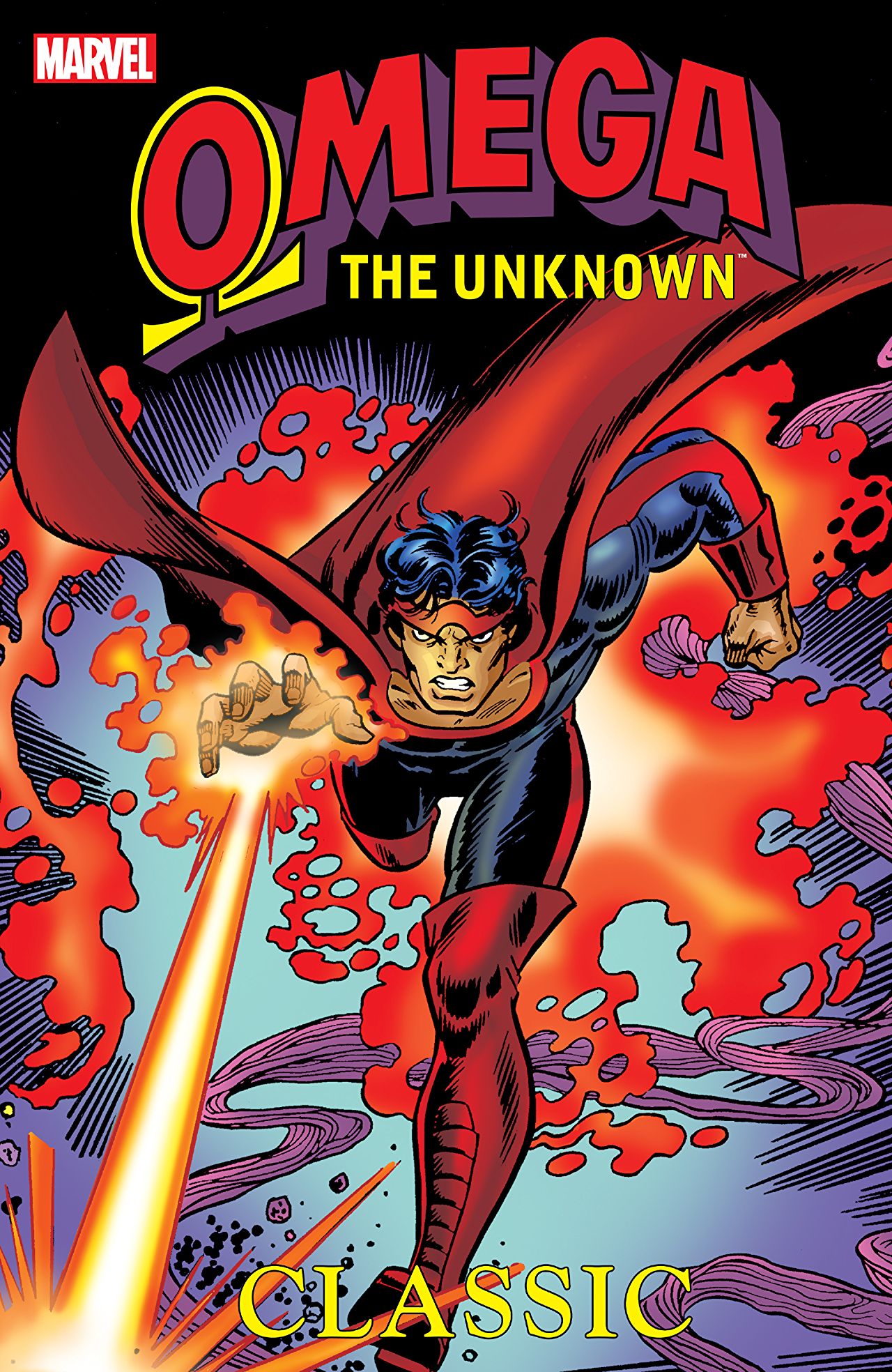 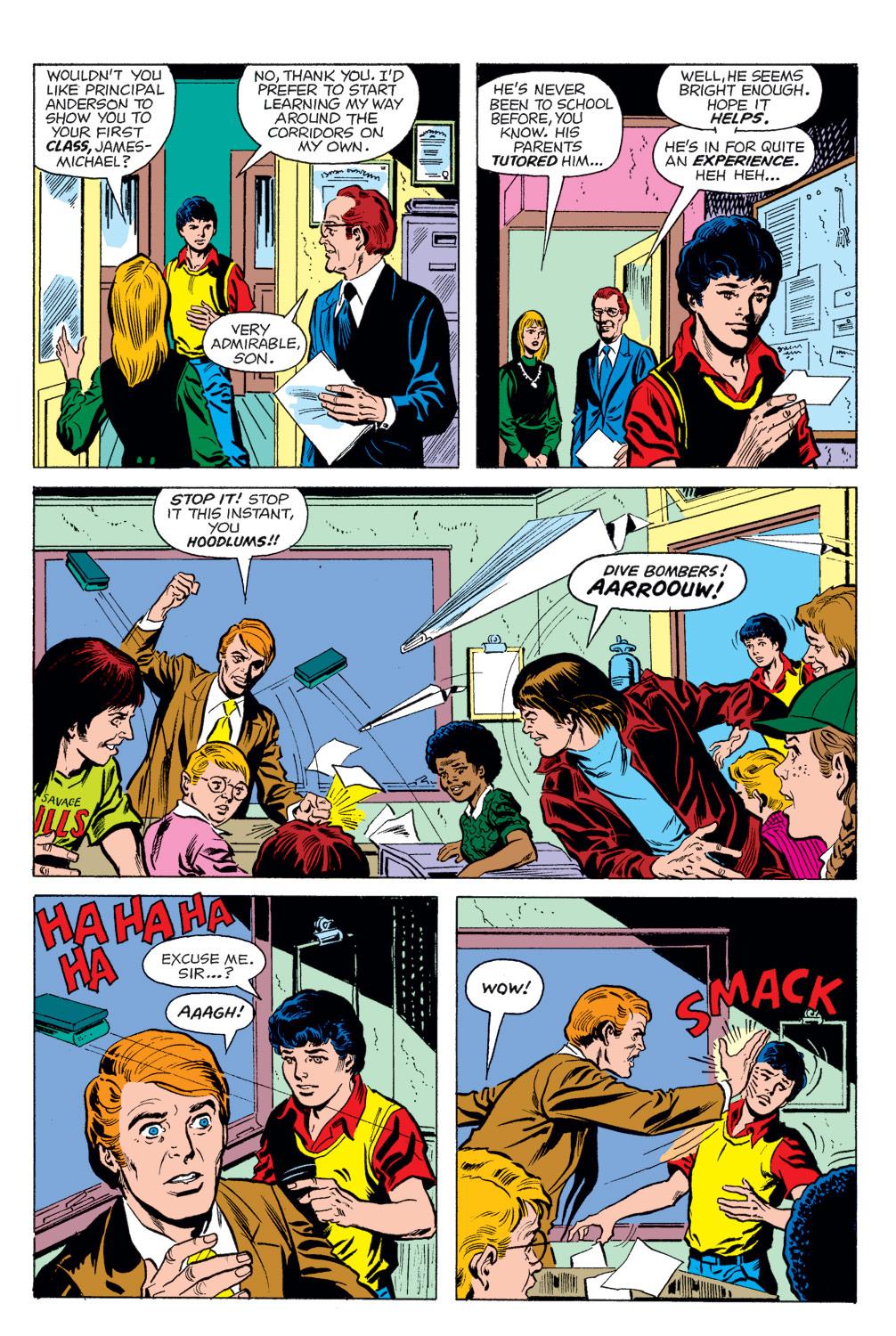 In 1976 Steve Gerber wanted to write a comic about a young teenager struggling with the problems of growing up, but the market at the time wouldn’t support anything other than superheroes. Gerber had interest enough in those, but had proved very capable of writing what he wanted with only minor participation from the nominal star attraction. So it was with Omega the Unknown, and its legend expanded over the years because Gerber and co-writer Mary Skrenes never completed the project. Of the dozen comics reprinted in this collection, they’re only responsible for eight, and what they left was mystifying.

The series opens with a standard superhero battling robots. He’s a half-hearted play on Superman, but by focussing his mind he can emit destructive beams from an omega shape on the palms of his hands. Yet, it’s all the dream of precocious twelve year old James-Michael Starling, who’s barely comforted by his strangely unsympathetic and unemotional parents. The first of many seemingly random happenings the writers throw into the series occurs as all Starlings are involved in a car crash, which reveals the parents as robots. James-Michael’s final view of his mother is her disembodied head melting as she warns him not to listen to the voices. Even by Gerber’s standards this is strange, and it becomes stranger, yet Gerber remains true to the original idea, as the majority of the story concerns James-Michael’s new life in New York, cared for by timid nurse Ruth and her more adventurous flatmate Amber. He befriends others at a high school where his superior vocabulary makes him a target for torment, but just what is his connection with Omega?

Jim Mooney had previously drawn Gerber’s Man-Thing stories, and before that Supergirl, and there’s a formal composition to the action sequences, but he’s far better with the James-Michael pages, the occasional posed stiffness notwithstanding. There’s very little traditional glamour as Mooney brings the scuzzy Hell’s Kitchen area of New York to life.

The material by Gerber and Skrenes has a real seat of the pants quality about it, as if they’re throwing in bizarre interludes to keep those who think they’re reading a superhero comic happy, while intending to figure out how it connects somewhere along the line. As much as anything they seem to be asking why people are the way they are, and existentialism is a deep topic even for the experimental Marvel of the 1970s. It’s a Vertigo comic before its time, if you will.

There are fill in chapters, the instruction obviously to tell a story without affecting anything, and the easiest way is a standard superhero battle. Scott Edelman surprises with his ending, and Roger Stern appears to have consulted, as he introduces two characters from Gerber’s Man-Thing series. The following Gerber/Skrenes chapter is no better, with Omega randomly talking when before he’d been almost silent. The last chapter by the creative team is a gem, but that’s all they wrote, and it was left to Steven Grant to tie up loose ends. Grant’s story has a twist to it, but a very poor twist. It’s melodramatic nonsense involving the Defenders, drawn without a shred of sympathy by Herb Trimpe.

It’s a sad ending, but at least Gerber and Skrenes didn’t disappoint. The best of their inquisitive work still stands up very well, but if you ever need life not being a bowl of cherries reinforced, this is it. Novelist Jonathan Letham was such a fan he produced a re-boot in 2007, and in passing supplied a far better explanation of this Omega.