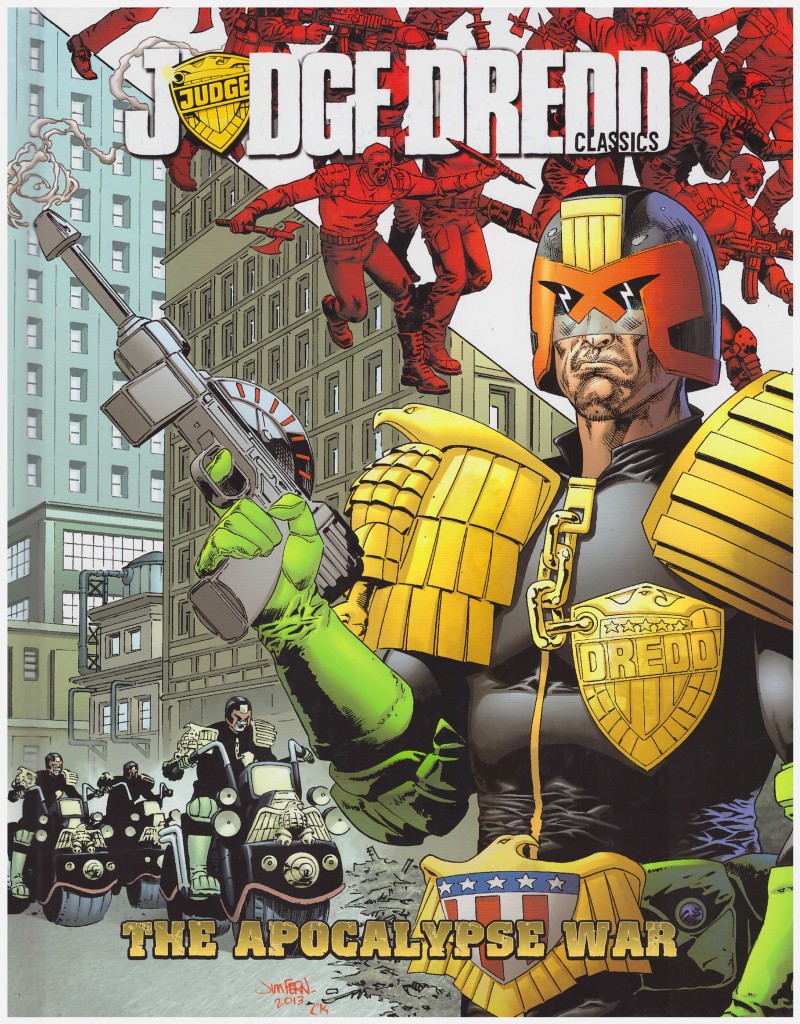 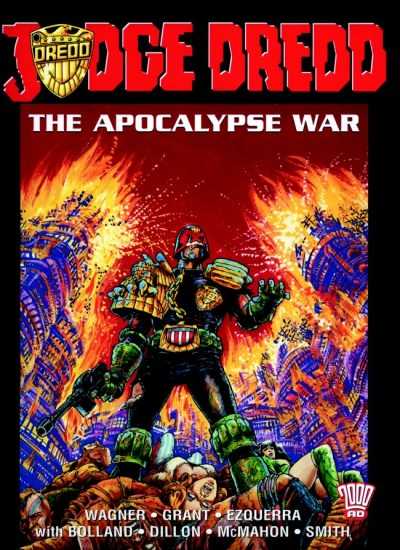 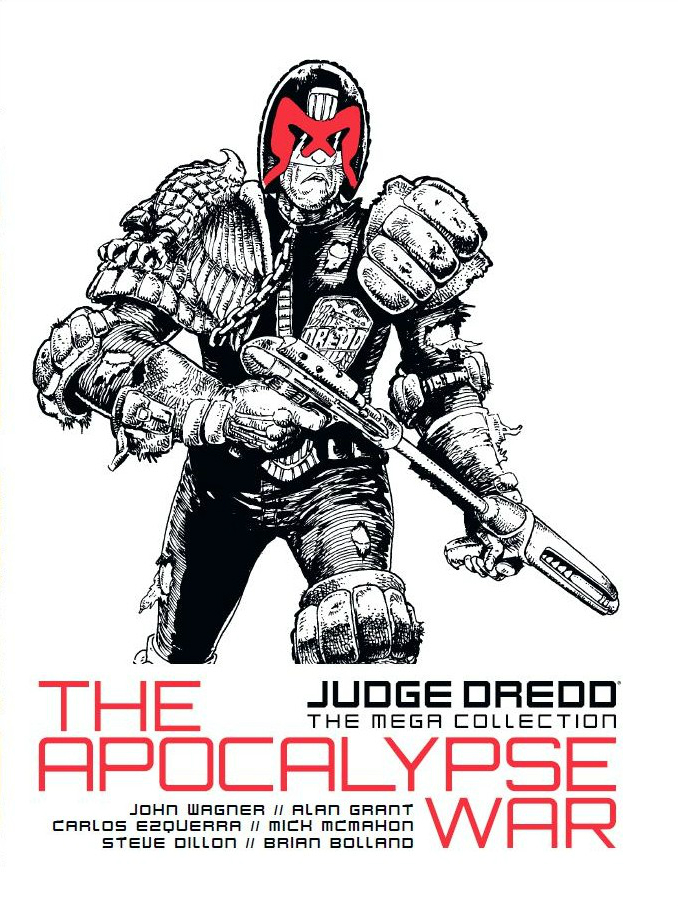 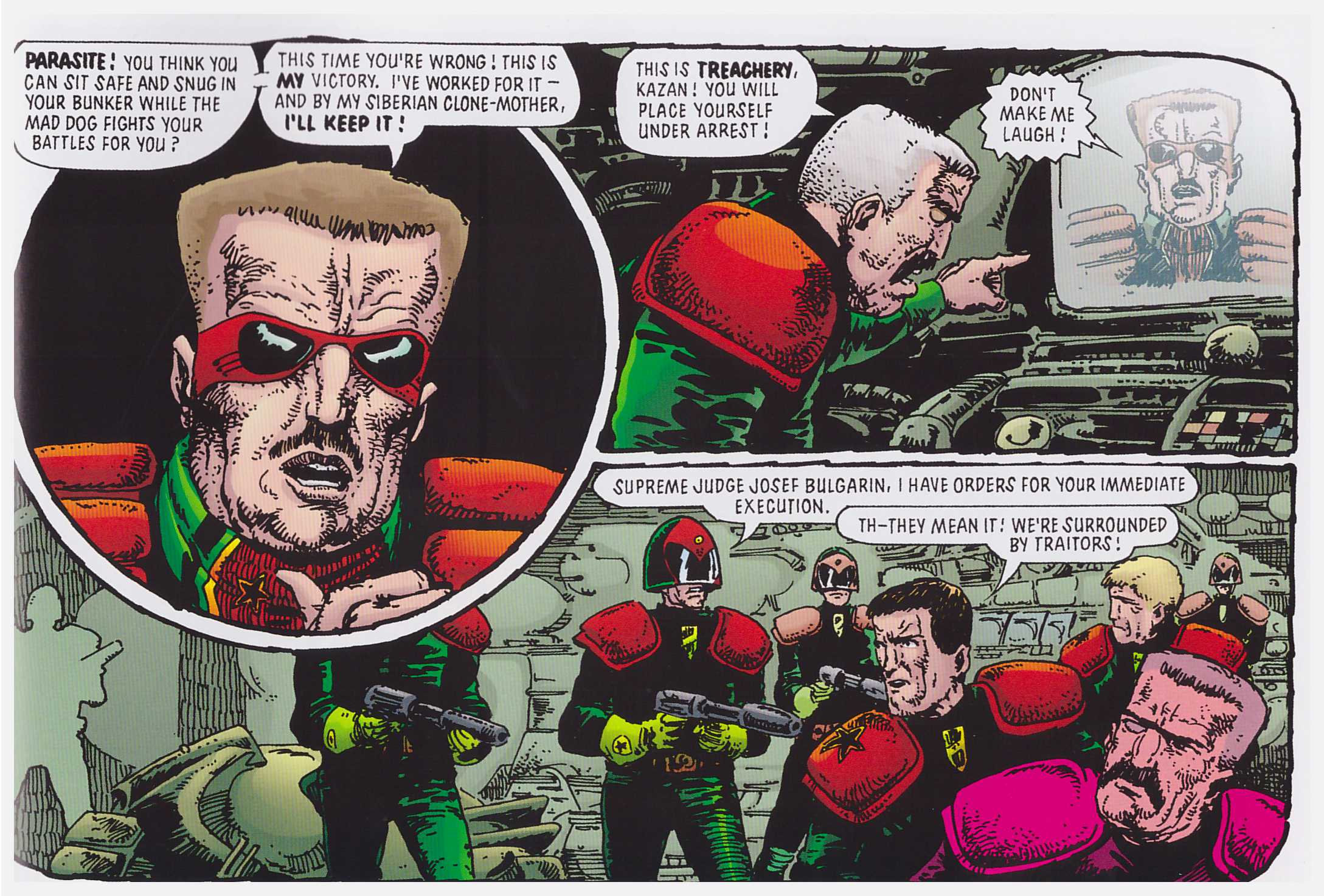 The Apocalypse War has legendary status among Dredd stories, regularly featuring in top ten lists, and often topping them, and is one of only two Dredd stories to feature in 1001 Comics You Must Read. This is odd, because it’s hard to bring to mind any other Dredd story that so follows the structure of the traditional British boys’ adventure strip, with the hero prodded from one cliffhanger to the next, but seemingly without any ultimate destination in sight. It’s perhaps inevitable given the scope of a story portraying the destruction of vast portions of Mega-City One prior to an invasion from East-Meg One, but it’s very disjointed. That writers John Wagner and Alan Grant weren’t totally winging it is indicated by a long-running sub-plot spotlighting Dredd’s robot servant Walter and his housekeeper, which eventually pays off after 19 episodes.

The recognition comes perhaps from some great moments scattered throughout. The early scenes in which armageddon rains down on the city are terrifying, accentuated by Carlos Ezquerra drawing nuclear missiles in almost inconceivable quantities. The opening chapter hammers home that the ideologically opposed judges on either side of the Atlantic are equally contemptuous of the population they herd. The appeasing complacency of the other North American Mega-Cities is plot expedience transformed into political gamble. War Marshal Kazan in his sinister shades is a classic Dredd villain, manipulative, ambitious and unrepentant to the end. More than anything, there’s a cohesion stemming from Ezquerra drawing all 25 chapters.

He doesn’t draw the Block Mania prelude, collected with The Apocalypse War in all but the first Titan reprints. Starting the entire scenario with a dropped ice cream is a clever idea, and ‘Block Mania’ also features the last Judge Dredd stories drawn by Mike McMahon and Brian Bolland.

The Apocalypse War finally delivers some structure over the final eight chapters when Dredd assembles a small team of judges to take the war to East-Meg One. This sequence is compact, seat of the pants thrills, with a well-conceived twist and the most iconic element of the entire epic. Dredd’s finger rests on the button that will unleash on East-Meg what Mega-City One has experienced, and in three panels Wagner and Grant deliver the ultimate insight into his character and the system he represents.

This was originally reprinted over two volumes before being collected along with ‘Block Mania’. IDW’s current reprint generated forum murmuring over a decision to colour the entire saga, and furthermore to alter elements of Ezquerra’s original colour splash pages. Adding colour to strongly contrasted art originally designed for black and white publication requires greater skill than some might think, and overall Charlie Kirchoff produces a coherent collection. He opts to accentuate the darkness, while Ezquerra’s colouring for the original comic prioritised yellow and red to reflect flame and burning. To carp over colour not seen since the original publication in 2000AD seems very precious. It’s now additionally available as volume three of Hachette’s Judge Dredd partwork

Distance has removed the echo of real world political fears feeding into the writing, as the USA and Soviet Union escalated bullish rhetoric and many feared nuclear war as a real possibility. ‘The Apocalypse War’ remains a Dredd touchstone, but should it be among the best Dredd stories ever published? No.