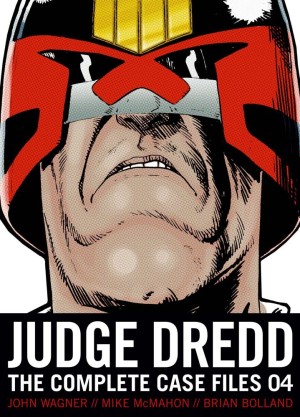 If you only want to sample one Dredd collection, this is the place to begin. There’s barely a story here that dips to average, never mind below, artists Mike McMahon and Brian Bolland are in their prime, and the Angel Gang, Judges Hershey and McGruder, and Chopper make their debuts. Furthermore, in the history of comics only Will Eisner and Carl Barks have matched John Wagner and Alan Grant for consistently delivering high quality material packing a dense single story plot into seven or eight pages, and in Eisner’s case they share a talent for providing a great story with the title character largely absent. Here the pair are at their peak. Not that it’s apparent from the quality of his work, but before collaborating with Grant, Wagner had concluded he’d little more to say about Dredd and his world and was considering quitting the strip.

Much of the volume is occupied by ‘The Judge Child Quest’, which harkens back to ‘The Cursed Earth’ by delivering one or two chapter vignettes as part of the larger search for a precognitive child. It’s been predicted he’ll be needed to lead Mega-City One during its greatest crisis, and therefore needs trained. The search for Owen Krysler first takes Dredd back into the Cursed Earth, and then into space. It’s far from linear as Wagner’s imagination drifts into overspill, delivering one hilariously imaginative strip after another. There’s a society based on ancient Egypt that worships garbage, a living planet, a disturbing sequence of people who disappear chunk by chunk. It’s all impeccably drawn by Brian Bolland, Mike McMahon and Ron Smith, each delivering memorable sequences. Some dislike the disjointed nature of the story, with the main mission sidelined for several chapters at a time, but when the detours are this good, why complain? Full marks for an unpredictable ending as well.

Once Dredd is back on Earth the imaginative mayhem continues. The Bolland drawn ‘Block War ‘would prompt Dredd’s next epic in Case Files 5, and on his blog McMahon cites ‘Monkey Business In The Charles Darwin Block’ as the Dredd assignment he most enjoyed. The transformation of every inhabitant of a city block into apes displays McMahon on spectacular form midway between his familiar Dredd style and the memorable technique he’d later use on Slaine. There’s more of it on ‘The Fink’, a hillbilly chemist with a mission in Mega-City One.

The Smith-drawn ‘Otto Sump’s Ugly Clinic’ is perhaps the ultimate of Wagner and Grant’s many commentaries on society’s obsession with disposable fads. Ridiculous commercials promote the conceit that if you’ve got the money you can afford to stand out from the crowd by transforming yourself into a monstrosity. Sump returns before the book’s end.

This collection also features the return of Ian Gibson to Dredd, under his own name and as Emberton and Q.Twerk, in a series of one-offs. The highlight is probably ‘Any Confessions’, one of several exaggerated gameshow satires Grant and Wagner conceived where the lure of television exposure outweighs common sense. In ‘The Alien Way’ Dredd’s approach is considered too lenient, and Gibson excels on ‘The Nighmare Gun’.

Steve Dillon’s first Dredd precedes ‘Un-American Graffiti’ by Smith. When first introduced, daredevil graffiti artist Marlon Shakespeare was just another of the many throwaway characters Dredd’s met over the years, but something about him touched a chord with writers and readers. Under his Chopper incarnation he’s proved surprisingly durable.

Those preferring their reprints on better quality paper are directed to book 3 of Titan’s long-running Dredd 1980s reprint series, which contains both ‘The Fink’ and ‘Otto Sump’ stories, and the individual collection of the Judge Child Saga.