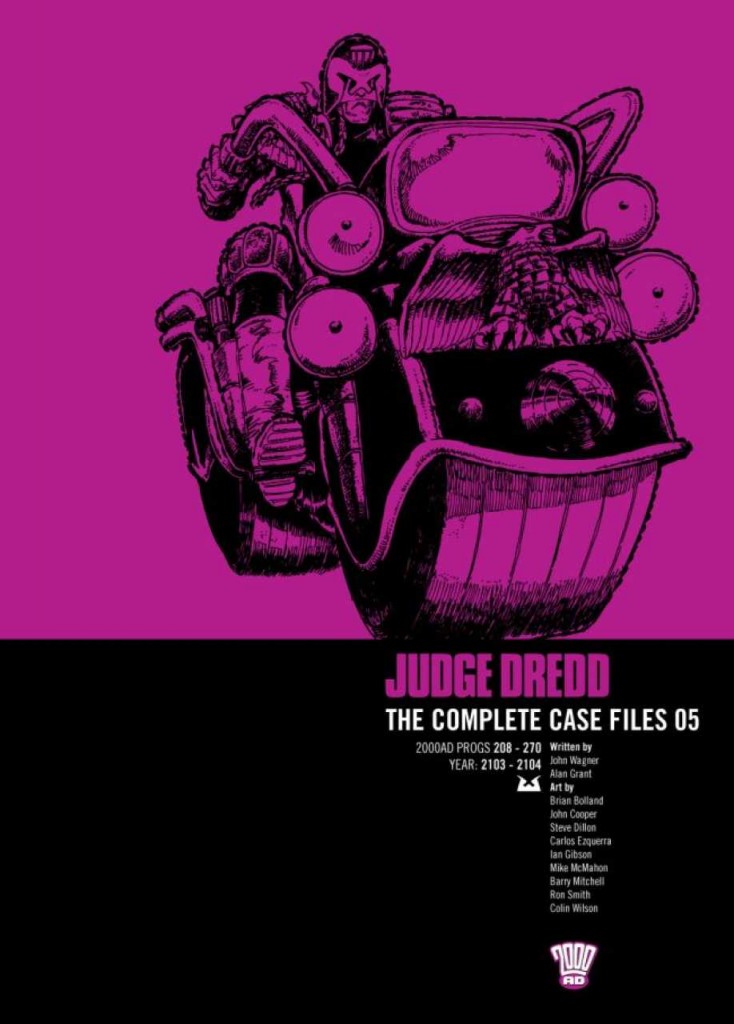 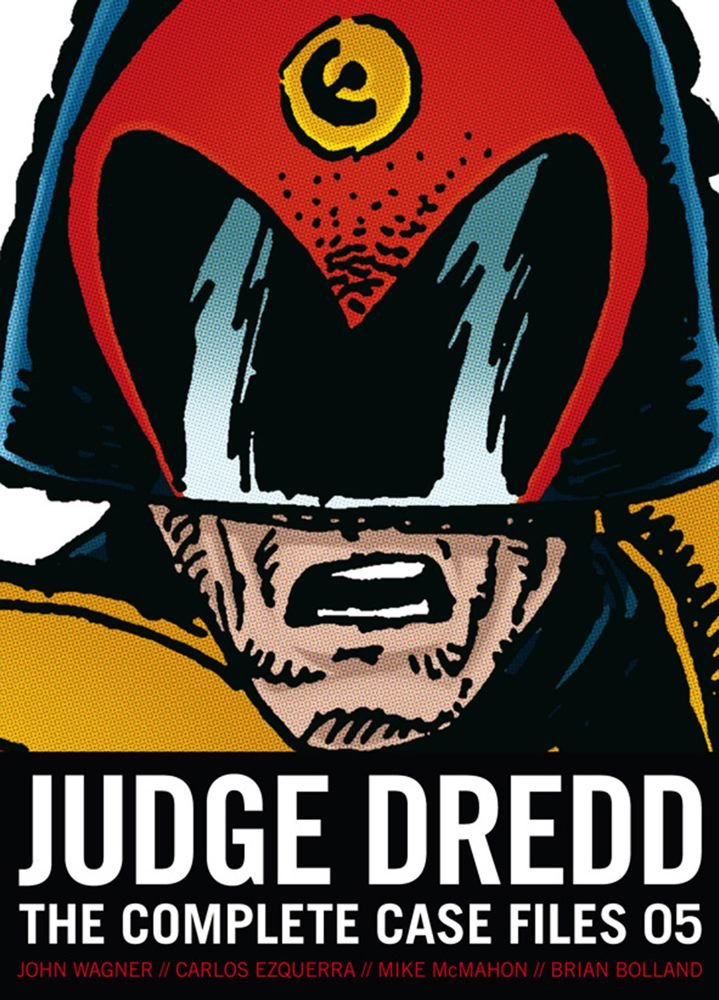 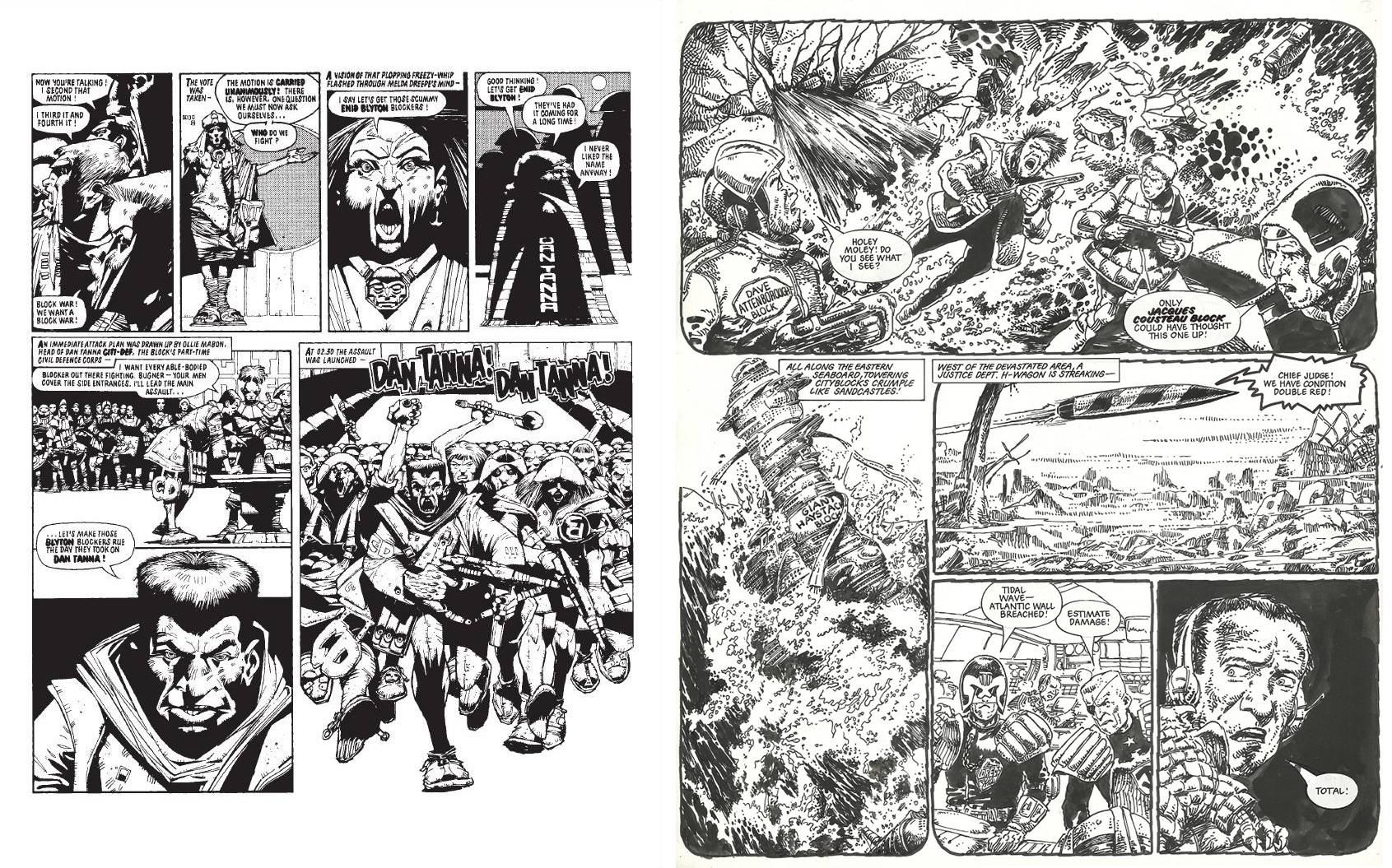 The bulk of this collection consists of ‘The Apocalypse War‘ and its prelude ‘Block Mania‘. Enormous credit is due Dredd’s writing team of John Wagner and Alan Grant for pulling the rug out from under themselves with a story that brings nuclear destruction to Mega-City One, followed by the East-Meg judges invading. It’s very much rooted in the real world political fears of the 1980s, but despite one of Dredd’s iconic moments as his finger rests on a button that could bring destruction to East-Meg One and the consistency provided by Carlos Ezquerra illustrating the entire saga, it’s disjointed and only coalesces in the final chapters.

The entire armageddon scenario begins with a dropped ice cream in ‘Block Mania’, a clever touch that fires the ever-present tensions of cramped life in city blocks housing thousands. By the time the judges discover a more sinister origin, the Apocalypse War is about to begin. ‘Block Mania’ features valedicotry moments with the final Dredd strips from Mike McMahon and Brian Bolland, whose contrasting styles had defined Dredd and his world.

Those stories close the volume, and the majority of material beforehand runs to two episodes, and continues a fine run of novel ideas. A series of connected tales focus on the assorted crimes committed in Mega-City One. The more disturbing utilise ghastly avenues opened by technological progress. Humans can be traded as loan collateral, frozen in liquid nitrogen until a debt is repaid. For those who default the condition becomes permanent. Even worse is stookie glanding, following a discovery that a gland removed from an alien species has miraculous anti-aging properties, but it requires killing the alien. An effective alternative take on the idea was later used to good effect on Babylon 5.

This volume’s other landmark story is ‘Judge Death Lives‘. Death on his own had previously been problem enough, only stopped by Judge Anderson trapping his essence with herself, and then submitting to permanent entombment. When Death escapes he summons his other-dimensional colleagues Fear, Fire, and Mortis, each magnificently designed by Bolland. The story produced two of Dredd’s most iconic images, the first as he punches Judge Fear shouting “Gaze into the fist of Dredd”, and the menacing image of Judge Death and his companions over a double-page spread hissing “This city is guilty. The crime is life, the sentence is death.” It was the longest Dredd story Bolland would draw, and his penultimate.

Colin Wilson’s only Dredd contributions are collected here, each a precisely drawn example of clear storytelling, an indication that his future lay in European graphic albums. The best is ‘Diary of a Mad Citizen’ as the pressure of life becomes too much to bear for Citizen Kweeg, who goes postal. The final story before ‘Block Mania’ is Judge Dredd leading a group of judge cadets outside the city for a training run. Seeing Dredd recast as a traditional western hero, albeit backed up with immense technology, proves an interesting diversion. Perhaps Ron Smith’s style was a little too clean for a concept that cried out for McMahon or Ezquerra, but they were up next.

As it occupies much of the book, any reader’s overall enjoyment of this volume will depend on whether they consider ‘The Apocalypse War’ a justifiably legendary Dredd landmark or often rudderless and over-extended.