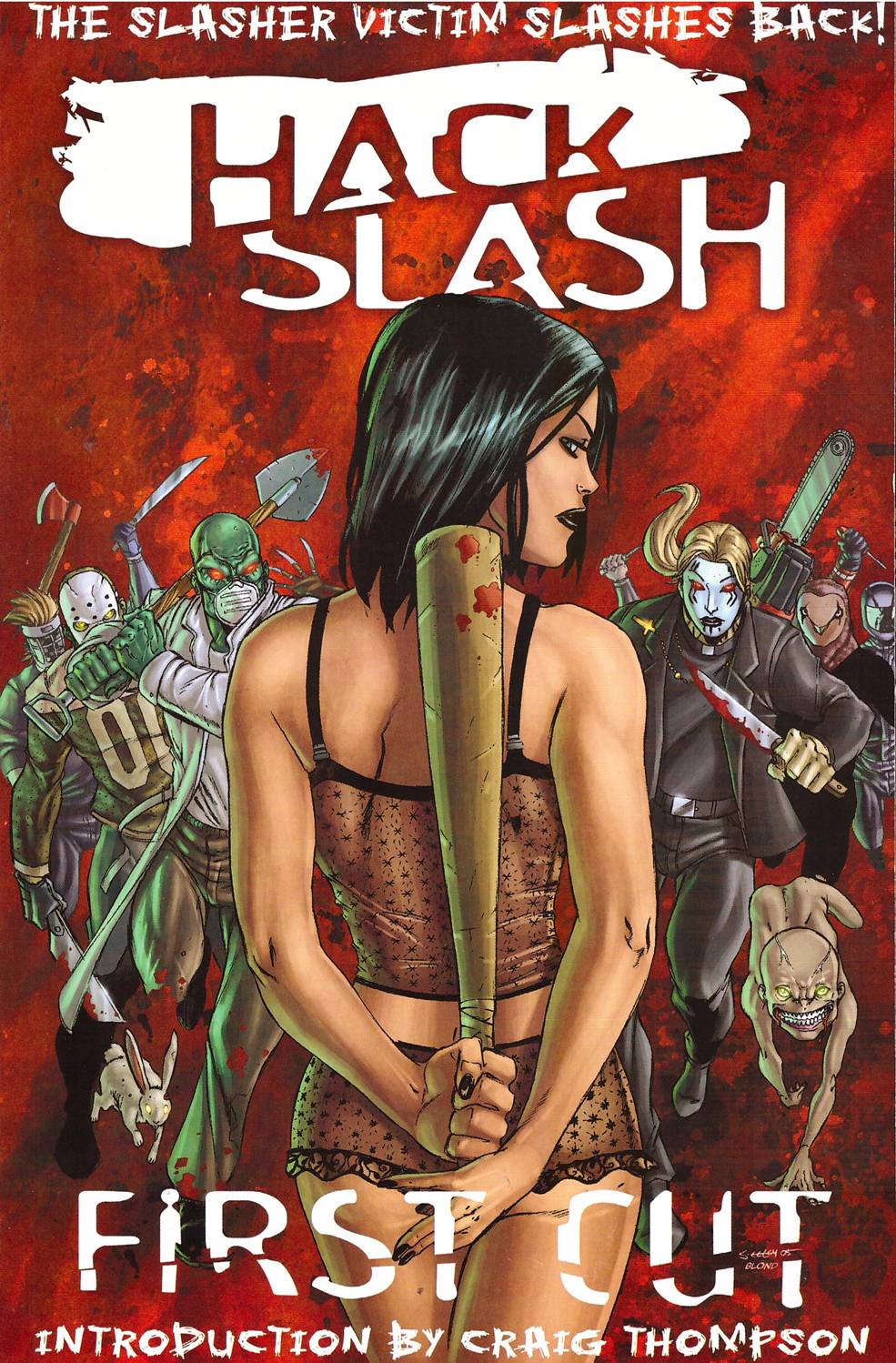 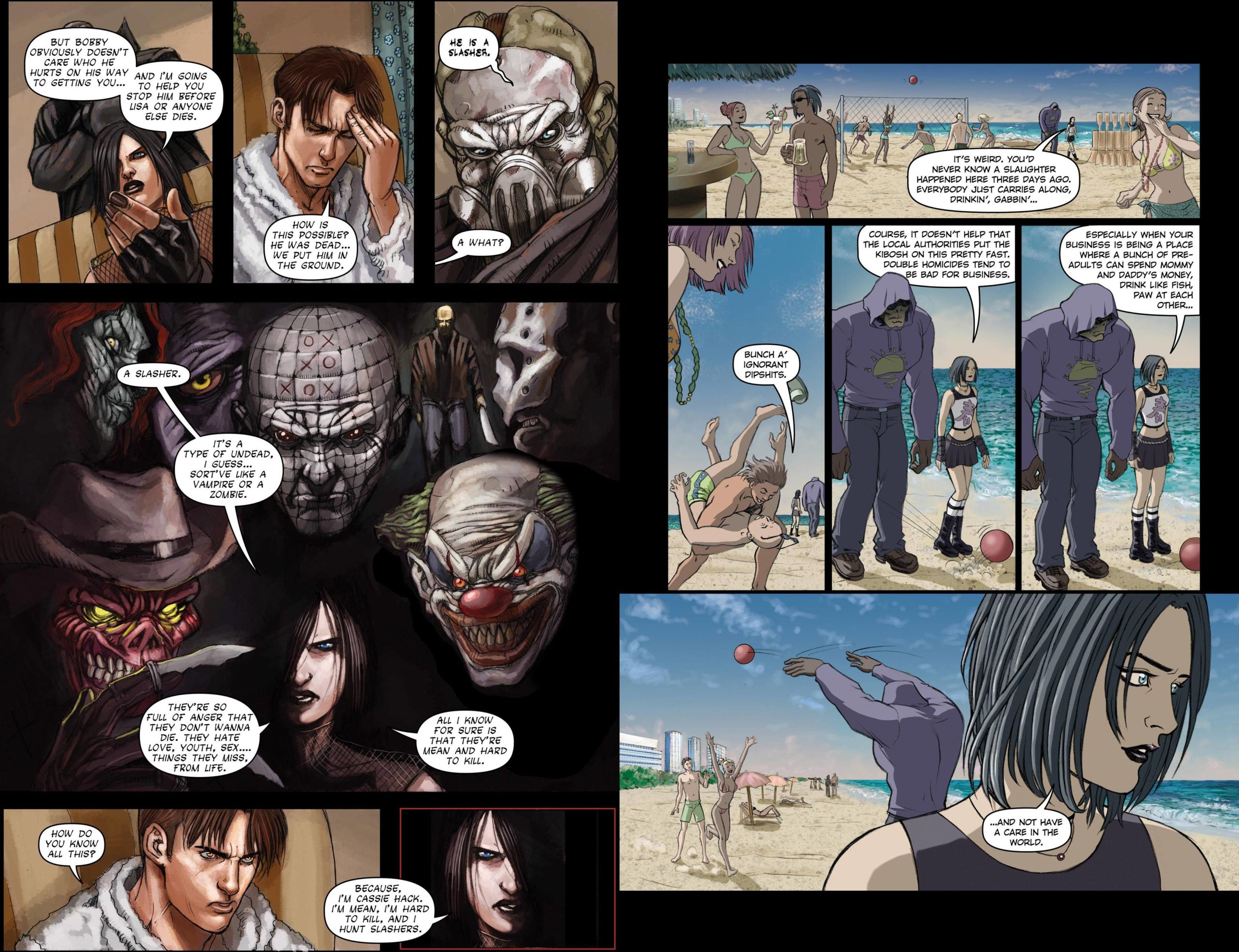 For anyone believing in universal respect, enjoyment of the slasher movie is a complex political minefield. That women are always victims is interpreted by some as representing a misogynistic mindset, and slasher films are generally exploitative in further respects, yet the counter argument is that they’re not intended as anything beyond entertainment. Could the genre be subverted? As noted on the back cover, in every slasher movie there’s one girl who makes it all the way to the end. What if instead of traumatising them for life, the experience strengthened them? Meet Cassie Hack, an idea good enough to properly begin Tim Seeley’s comic writing career, and lasting through more stories than he surely ever considered possible to begin with.

Cassie’s introduction to masked serial killers began in her teens, Seeley detailing a suitably bleak origin story over three pages. Instead of becoming a victim, the experience provides Cassie with a purpose in life. Intervening years would later be covered in My First Maniac, but in brief, she glams-up, acquires a suitably gruesome and humungous sidekick and sets about luring slasher killers to their deaths. It’s obviously tongue in cheek, and sometimes funny, but Seeley keeps closely enough to other genre standbys that the humour doesn’t alienate slasher film fans. He explains slashers as a sort of zombie spin-off, always returning from the dead, and has enough imagination to create interesting variations on a theme, while Cassie is well defined, absolute certainty in action, yet not without vulnerabilities in other situations.

Seeley’s also incredibly lucky in having the likes of Stefano Casselli and Federica Manfredi as collaborating artists. Both have naturalistic styles, with Manfredi more likely to include the surroundings and people, as she’s good with both, expressions often revealing the subtext well. Mike O’Sullivan illustrates a Christmas rhyme, some cute cartooning to accompany a disturbing seasonal treat.

In addition to exploiting the exploitation genre, Seeley’s not shy about using other tack to accompany his serial killers, setting one story at a Spring Break resort and another at a comic convention, where Steve Niles is murdered. Let’s hope the pages of ‘Death by Boob Job 2’ aren’t Seeley’s movie pitch thrown in as a sideline. Everything is presented with just enough of a knowing wink to pass muster, and there’s a hefty back-up section including pin-ups, character bios and a report on the Hack/Slash stage play. Appropriately, it’s in Death by Sequel that Cassie returns, alternatively the content of both is found in the first Hack/Slash Omnibus. 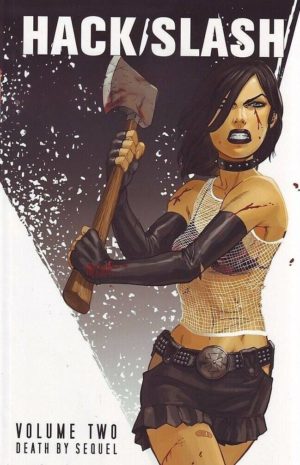 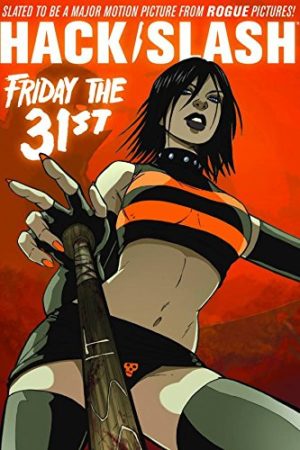 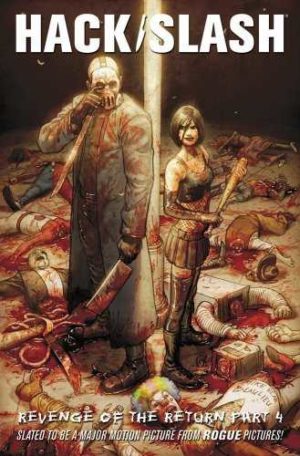 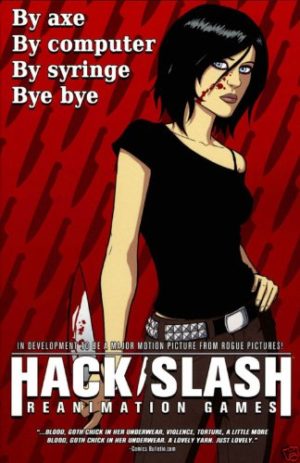