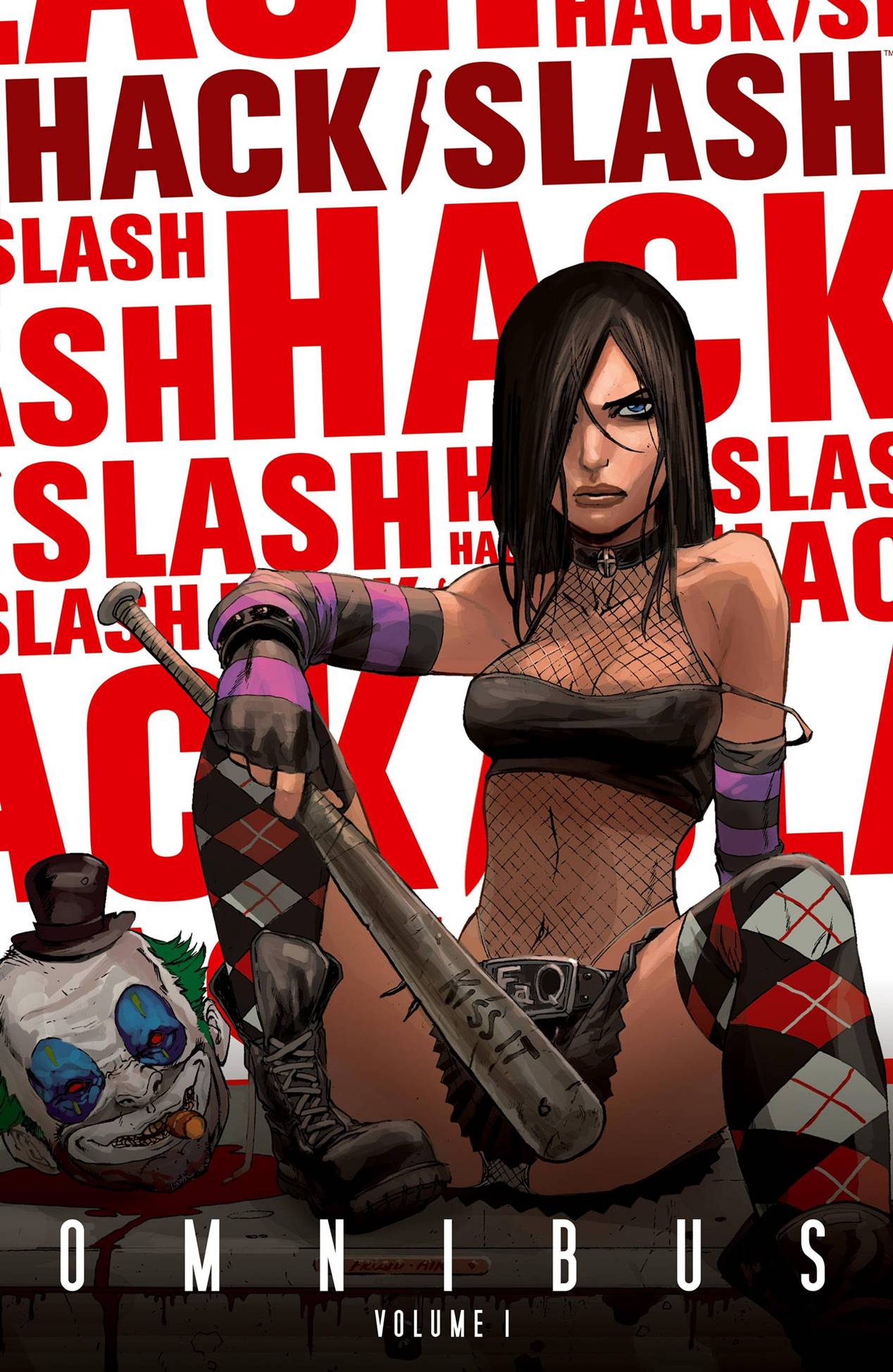 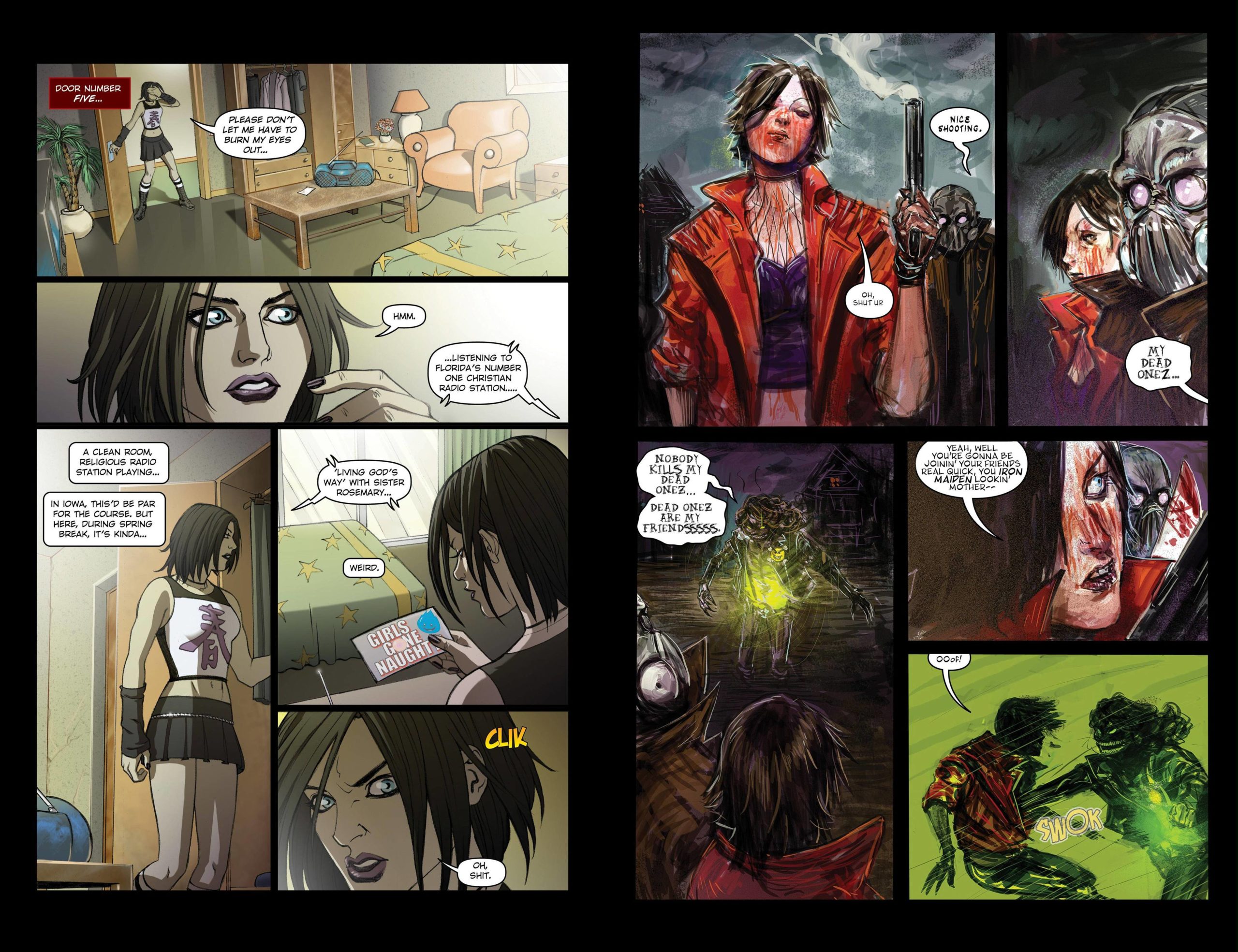 The phenomenal success of Hack/Slash is represented by this first Omnibus collection going through seven printings in ten years. It’s because Tim Seeley hit on a good idea of reversing the tradition that one girl always survives in slasher movies as a wreck who’s probably seen her cocky boyfriend murdered and will require therapy for the remainder of her life. Instead, what if she became empowered by the event? We learn Cassie Hack’s circumstances early, the dinner lady experience transforming her into someone who vows to track down slashers everywhere.

Seeley ensures she’s likeable, absolutely without mercy while at work, yet not without vulnerabilities, which is also the case for her hulking companion Vlad. In Cassie’s world slashers are a form of intelligent zombie, although there are variations, compelled to kill and enjoying the experience. At least until Cassie comes to town.

Artistically, the result are mixed. Stefano Caselli draws the first story, and is surely grateful for the considerable royalties generated ever since as co-creator. His is a naturalistic style, improved on by the collection’s best artist Federica Manfredi (sample art left), who works hard to supply details and locations. After those two, however, the art is very much hit and miss, represented in microcosm by a selection of shorts purporting to promote forthcoming stories. Skottie Young stands out, but most of the remainder are ordinary. Dave Crosland starts well with a sketchy style on another longer piece, but the pages look more rushed as a story about a killer operating in dreams continues.

The popularity of Hack/Slash resulted in several team-ups for Cassie over the years with characters operating in similar territory, although usually without as much wit. The first two appear here, and a selling point for anyone who may already have the paperbacks First Cut, Death By Sequel and Friday the 31st, is the inclusion of a teaming with Evil Ernie not gathered in the paperbacks. For a character representing the worst aspects of the slasher genre and never more than the sum of his influences, psycho killer Evil Ernie has achieved an astonishingly long run in comics. Seeley writes rather than Ernie’s creator, but an irredeemable character remains one-note. Aadi Salman’s art, though, creates a good atmosphere through a smoky filter, and is the best aspect of this team-up (sample page right).

Far more prestigious in slasher terms is Chucky, the murderous, scarred two foot doll with a steak knife from the Child’s Play films, and his turning up results in the best content here. Seeley has the luxury of a longer page allocation to develop a story, he twists things well, returns a few people we’ve seen before, and generally makes good use of Chuck’s psychotic tendencies. Wes Dzioba draws this section, efficient without being startling, although he captures Chucky well, making him a credible threat, which hasn’t always been the case in comics.

Overall, there’s no mistaking what you’re getting here from the cover. It screams trashy horror, and trashy horror this is, but with some wit and entertainment value. Sixty pages of cover reproductions and pin-ups form the bonus content, and with Volume 2 the Omnibus heads into the Hack/Slash ongoing series. 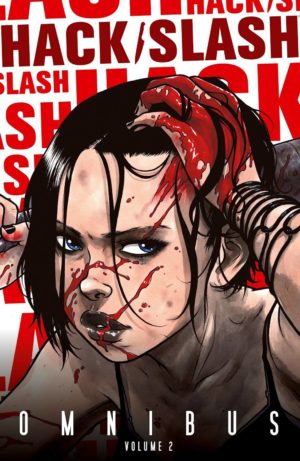 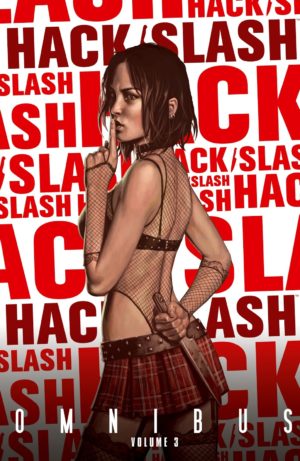 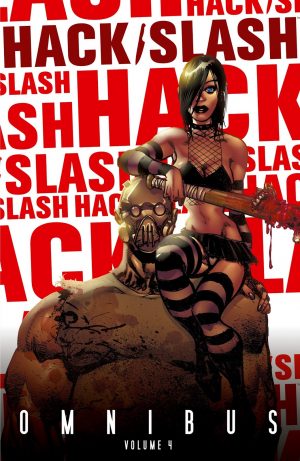 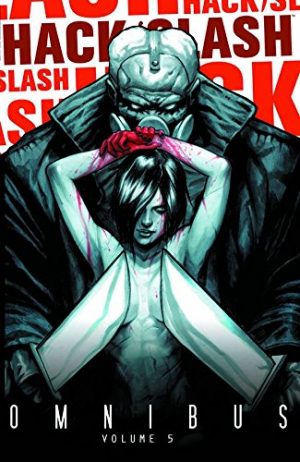