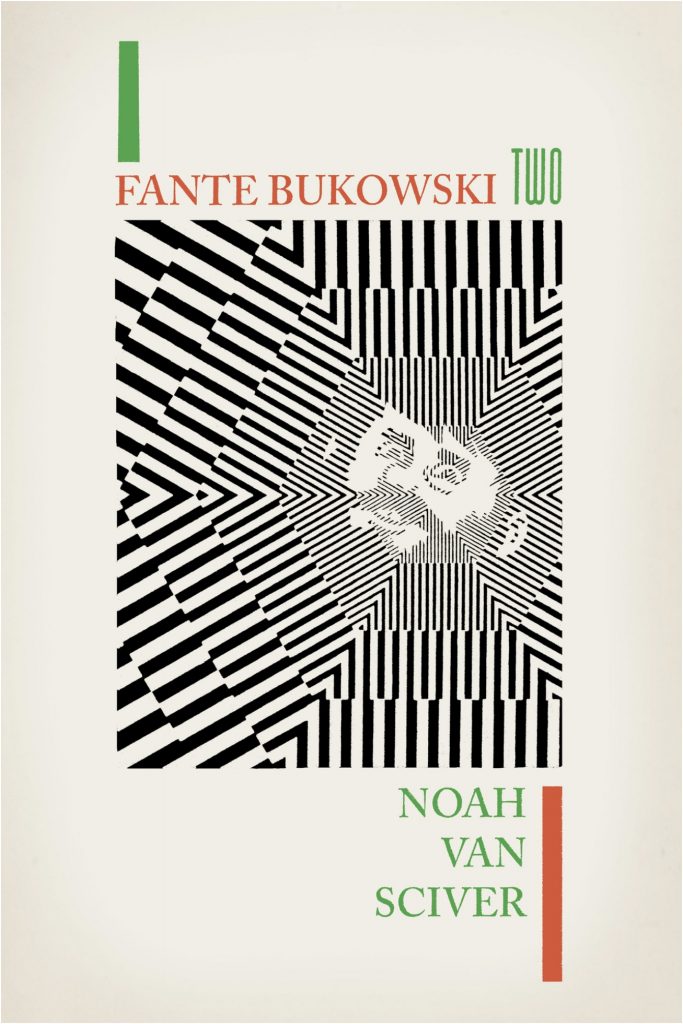 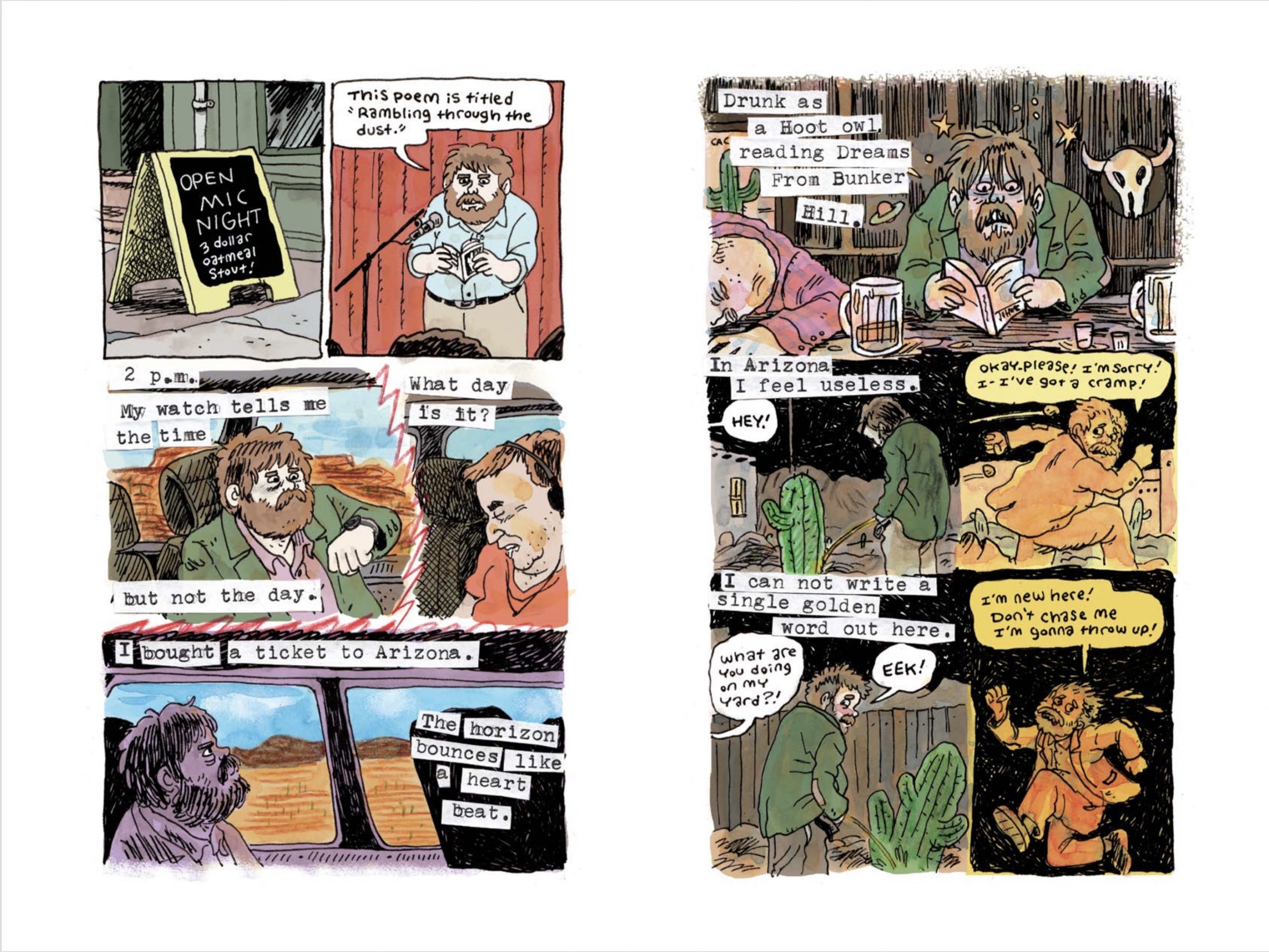 Over sixty pocket-sized pages, van Sciver’s original account of his struggling writer’s musings, and staggerings though literary events was captivating. It evoked pathos as often as it provoked laughter. Is there, though, enough mileage for this second, and much longer volume?

Fante Bukowski Two catches up with Fante a year after the end of the first volume, when he quit town (and a promising relationship with young writer Audrey Catron) to find “somewhere he could breathe”. Ironically, the comically seedy motel he’s checking into, and the veiled menace of it’s proprietor, suggest he’s effectively in the same place.

Van Sciver has finely-honed antennae for clichés of writer stories, and succeeds in mining from them fresh narrative and comic potential. For example, after hooking-up with sex-worker, ‘Lady’ he boasts “You probably had no idea that you’d be sleeping with a great writer today, huh?” only to be told that Cormac McCarthy was there yesterday. McCarthy is just the sort of gritty, but literary, writer ‘Fante Bukowski’ would admire. This sequence is full of passing jokes: cartoonists “are excellent lovers” she says, but, (playing to Fante’s hobby horse), “the worst are editors. They’re so critical!” More than an amusing aside, this scene reveals Fante. It also sets up important plot developments: his (traceable) payment by credit card, and her compromising knowledge of an important editor, whom Fante bumps into – with his wife. Similarly, attendance at a poetry anthology launch, both satirises the scene as the editor thanks attendees for “witnessing the birth of my newest child”, and progresses the plot. Fante has the inspiration that if he too publishes a zine, he’ll be the editor, and “accept all [his] own submissions”.

The protagonist’s Fante/Bukowski inspired model of the dissolute writer is contrasted with clean-living Atticus Blake, and Audrey, now touring her successful second book. The pompous Blake is a target for satire, but not the thoroughly decent Audrey. She, instead, serves to satirise the price of success: the boredom of tours, and pressure to commercialise, in this case by granting film rights to her multi-generation family saga to absurdly mismatched director Michael Bay.

Novels about ‘artists’ (Kunstlerromane) typically channel the author’s own life, (as did both Fante and Bukowski), and Van Sciver has confirmed this, though emphasising a “struggling, unappreciated younger self” that he can look back on and mock. Audrey is more reverentially treated: compare her very literary readings to Fante’s howlers. She may be based on Van Sciver’s actual love interest (who appears in his autobiographical comics as ‘Amy’). Audrey even starts dating a Van Sciver lookalike… at least until he suspects her lingering feelings for ‘Fante Bukowski’, who is, in turn, fictionalised in her book. These multiple, interwoven layers of fiction with potential fact, the balance of humour and pathos, combined with the romantic tease of whether Fante and Audrey will reunite, keep the pages turning throughout this second, and longer volume.

The art here seems now to be Van Sciver’s settled style, much looser (and presumably faster) than his debut: there’s no need here for the historic mise-en-scène, exactitude, and general gravitas of fact-based The Hypo: The Melancholic Young Lincoln. Still, Van Sciver’s a confident artist, able to create distinctive and expressive characters, and propel them through a thoroughly engaging comedy drama.

Third and final volume A Perfect Failure appeared in 2018, with all three collected in 2020’s The Complete Works of Fante Bukowski. 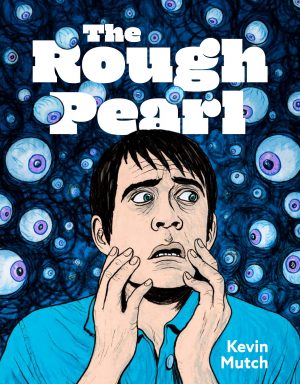 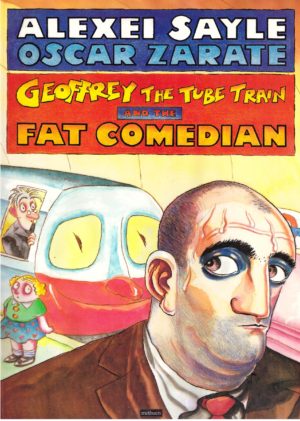