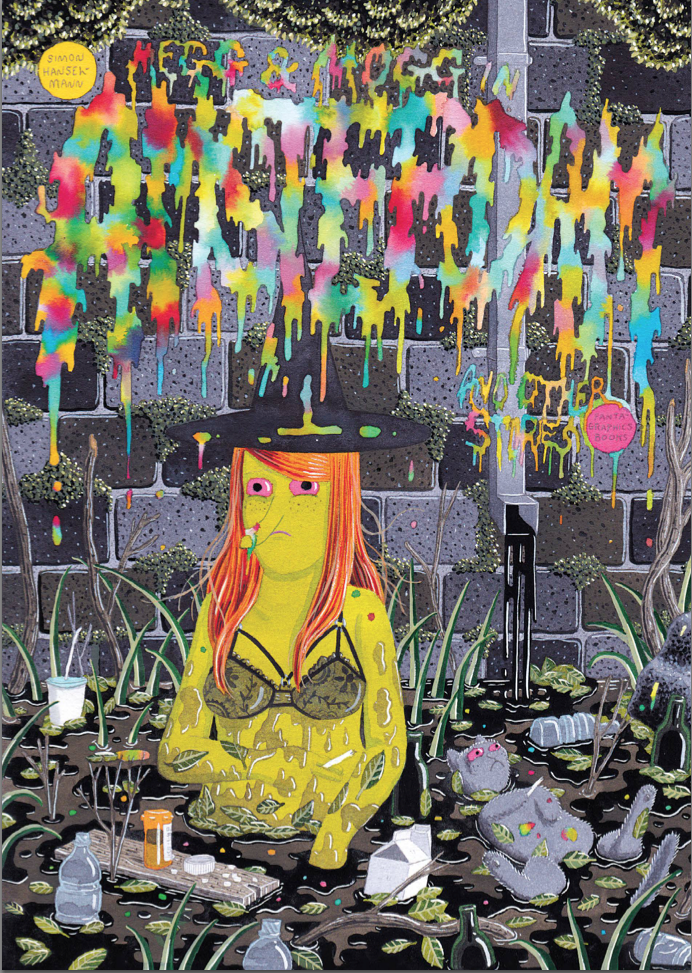 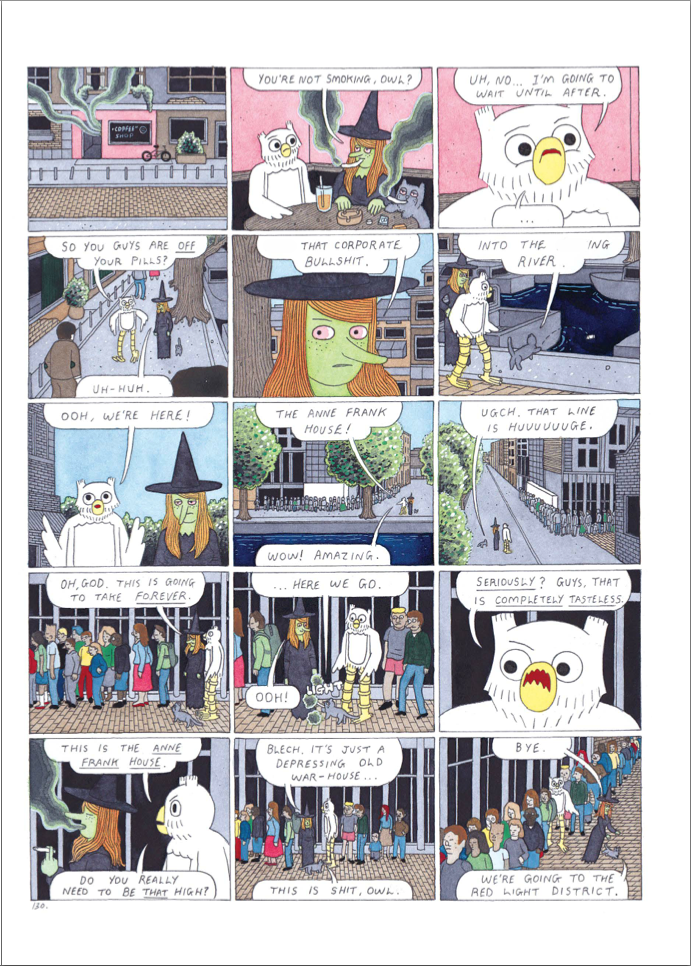 Fantagraphics credibly claim to publish the “worlds best cartoonists”, while still taking risks on new talent. Still, the sight of Simon Hanselmann’s Megahex, on their 2014 schedule had some readers wondering “Who?… why!?” A Halloween costumed ‘witch’ and cute animals: was this for children? In fact, it was definitely not for children, and its view of marginalised youth proved quite at home on the same list as Jamie Hernandez and Daniel Clowes.

This, then, is the second book-length outing for Megg, Mogg, and Owl. Megg is in the witch costume, and Mogg is her cat familiar and romantic partner. Owl is their housemate, and – like his namesake from Winnie the Pooh – somewhat stuffy and superior.

Actually, a better comparison is with TV’s Peep Show: Megg is the dissolute hedonist Jez, to Owl’s mature and responsible (Jez would say ‘uptight and boring’) Mark. Their engaging but dodgy friend Super-Hans is perhaps outdone here by Werewolf Jones and his unruly pups. While this comparison aims to give readers a handle, it possibly does Hanselmann a disservice – Peep Show may never have reached his native Tasmania, and his characters seem too well-realised not to be drawn from life. Megg seems an obvious avatar for Hanselmann himself, a bohemian dandy who often cosplays her at conventions. Perhaps she represents how he felt on an island with more nature reserves than cities.

Many episodes revolve around their lifestyle conflicts, as Owl gets home from work and his planned quiet night in front of the TV is typically thwarted. The others hardly leave the house, just sprawl amongst the empties and smoking paraphernalia. Imagine Owl’s reaction when he finds a ‘personal item’ of Megg’s just lying on their kitchen table!

Owl does manage to coax them out for a camping trip, but of course it doesn’t go to plan. It turns out the tent has been packed away wet, and now it’s ruined with mould. The others don’t care though as they’re more interested in getting wasted, and the contents of other people’s tents. In this case, a Hell’s Angels T-shirt, and a leather bikini (“…it’s an itchy one,” notes Megg). “You’ve been stealing…” asks a shocked Owl, “ … from bikers!?” Hanselmann’s a deft storyteller: he doesn’t show us the theft, or its consequences. The implication is quite enough.

Over multiple self-contained stories, he fleshes out the characters and their issues. Are Megg and Mogg really living the dream? Why do they and Owl stick with each other? How can Werewolf Jones sustain his anarchic, self-centred lifestyle? All these elements build up to resolution in the final story.

The Amsterdam trip is Megg and Mogg’s ‘couple time’ so they’ve left Owl at home. Surely they can’t fail to enjoy a trip to this stoner Mecca? Who cares that they’ve left their prescriptions at home? If this starts to seem like The Furry Freak Brothers, Hanselman at least matches it for tight plotting, and weaves the human crises and revelations elegantly into the action and comedy. Indeed, it’s these balanced elements that make the human stories so powerful, poignant without ever feeling corny or sentimental.

The art may look simple, but Hanselmann has an easy mastery of the form. He expresses the feelings of his characters (often unstated) through facial expressions, and subtle body-language. The settings are elegantly stylised, yet plausibly detailed: he brings their cluttered home, and occasional exteriors vividly to life.

So – another result for Fantagraphics. Megg and co, are the recognisable descendants of the dispossessed youth of Locas and Ghost World, but realised afresh. Hanselmann’s a younger generation, and seemingly unburdened by the achievements of the past.