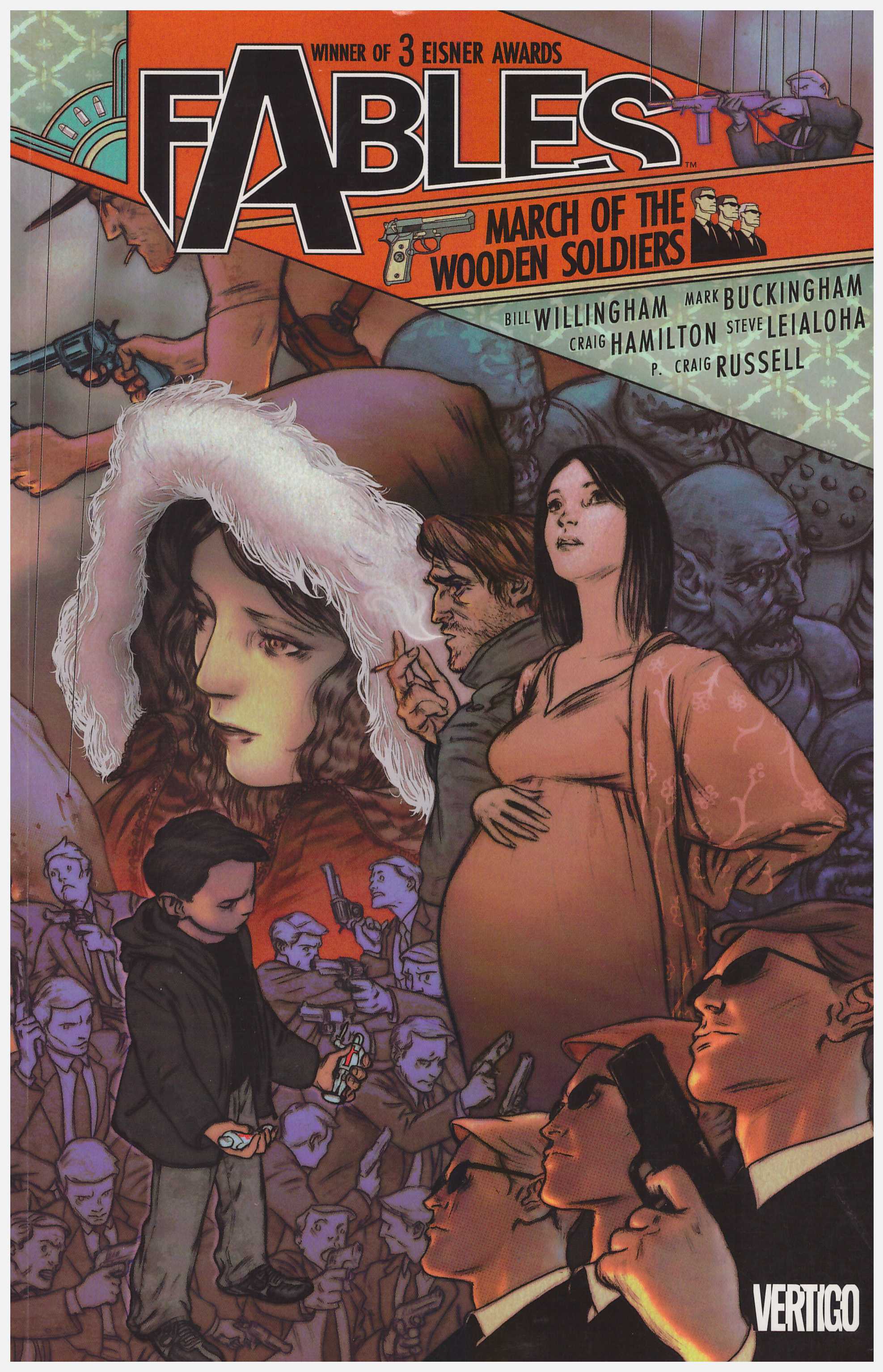 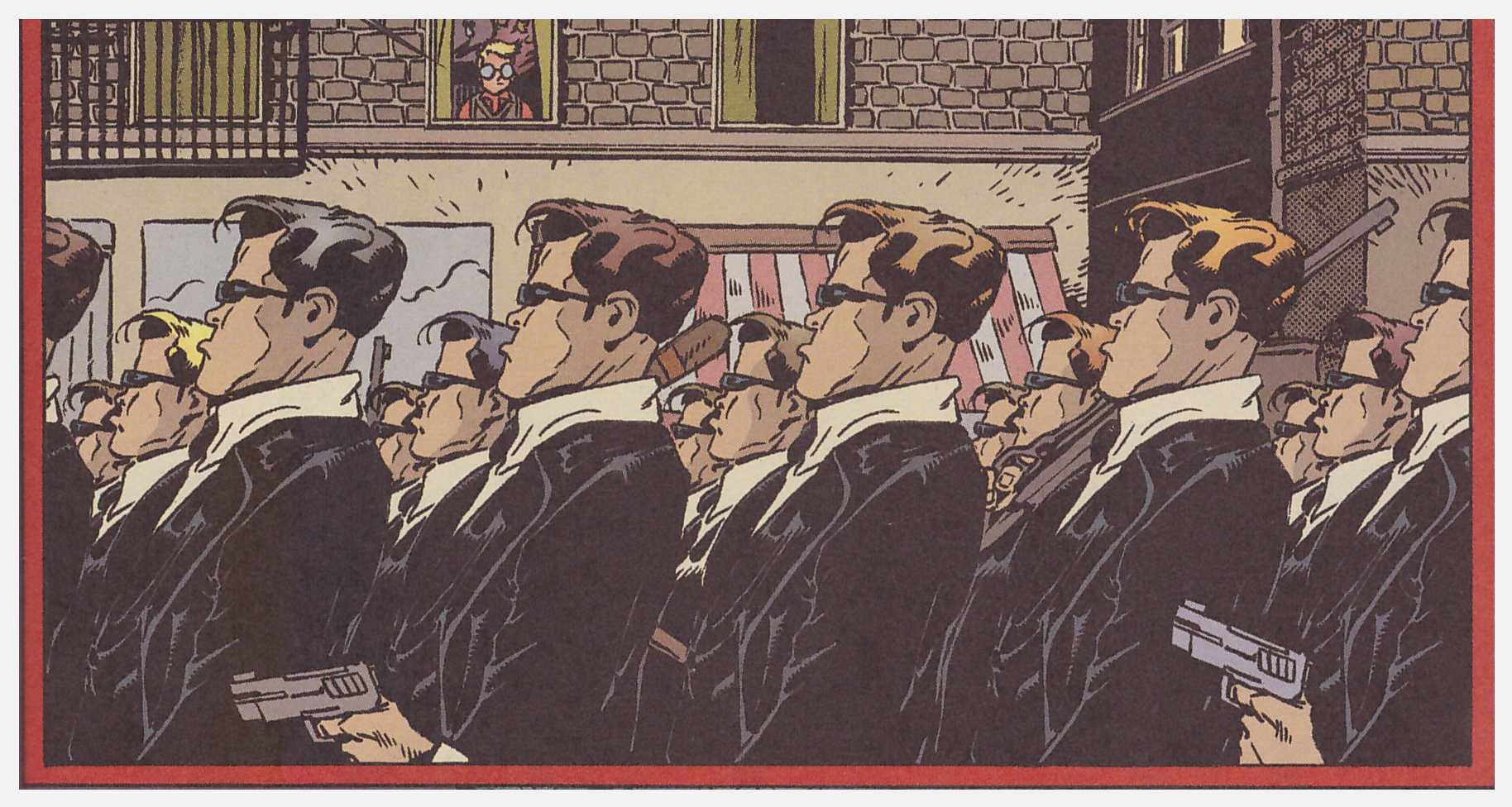 It’s been established that the Fables community is resident on Earth is because their homelands have been over-run and subjugated by the troops of a vastly powerful enemy, the Adversary. This occurred several centuries previously, and as the Fables are, to all intents and purposes, immortal, their memories are long. A few hints were dropped in Storybook Love, but March of the Wooden Soldiers delves deep into this sore topic.

Little Boy Blue was among the last of the community to escape to Earth before the portal connecting realms was sealed, and in the opening chapters he recalls the tragic circumstances, commemorated every year. If there are two creators with a more decorative style than regular penciller Mark Buckingham it’s Craig Hamilton and P. Craig Russell, and they share the art. A last outpost has been under siege from the Adversary’s forces for fifteen years when Red Riding Hood becomes the final person to reach the refuge. The heart-tugging story of love, loss and massacre also reveals the fates of several prominent mythical characters Bill Willingham didn’t intend using during the remainder of the run. Some artefacts mentioned here, though, will have a part to play. Within the story Willingham sardonically comments on a narrative device employed, but it’s not what you do, it’s how you do it, and he pulls it off.

The title story runs to eight chapters, by far the longest yet presented in Fables, and it’s a nail-biting, page-turning (and occasionally stomach-turning) gem. It begins with the arrival of someone presumed dead to Fabletown, and the simultaneous emergence of small packets of the Adversary’s forces crossing between worlds. Just when Fabletown is facing it’s biggest crisis in centuries Prince Charming decides to make a run for mayor.

The element that in stories by lesser writers would be dragged out for a big reveal is displayed relatively early, leaving a Fabletown essentially under siege, yet still having to maintain its secrecy from the wider world. Previous volumes have predominantly concentrated on the establishment of the Fables and their society, but from there’s now a greater focus. It also establishes just why Snow White is such a capable and adaptable administrator, something that has to this point been related but never seen.

It’s part of the characterisation that comes to life here. Previously Willingham had been coasting to a degree as far as the cast were concerned, often applying contrary attitudes to surprise, and with the series obviously a success and ongoing this required justification. Bigby Wolf emerges from March of the Wooden Soldiers a much improved character.

Taking his lead from the children’s story books in which the Fables originate, this volume marks the first in which Buckingham consistently uses decorative page designs, containing panels within a shield shape, or surrounding them with ornate trimmings. It’ll be in volume six that he formalises this into the familiar sidebars that come to characterise his art on the series, but the designs here are equally welcome.

Minus ‘The Last Castle’ opening chapter this is also available in hardcover on glossy paper as Fables Deluxe Edition volume three, and the next volume is The Mean Seasons. 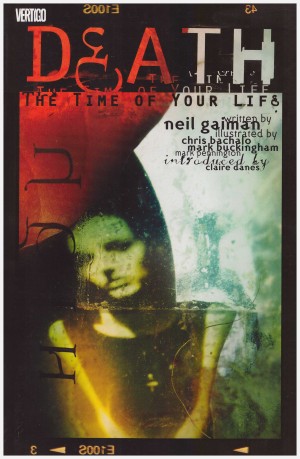 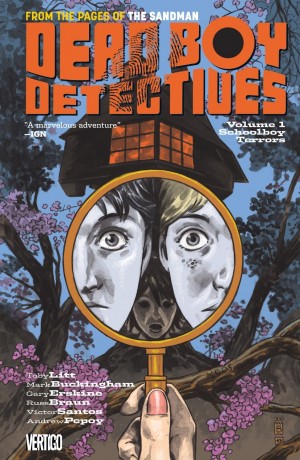