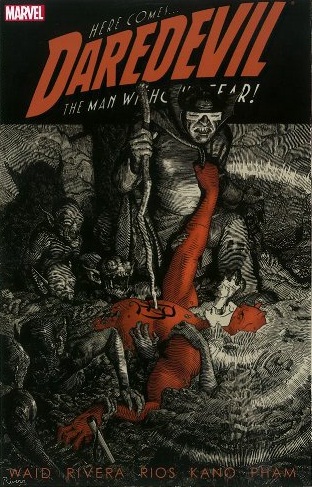 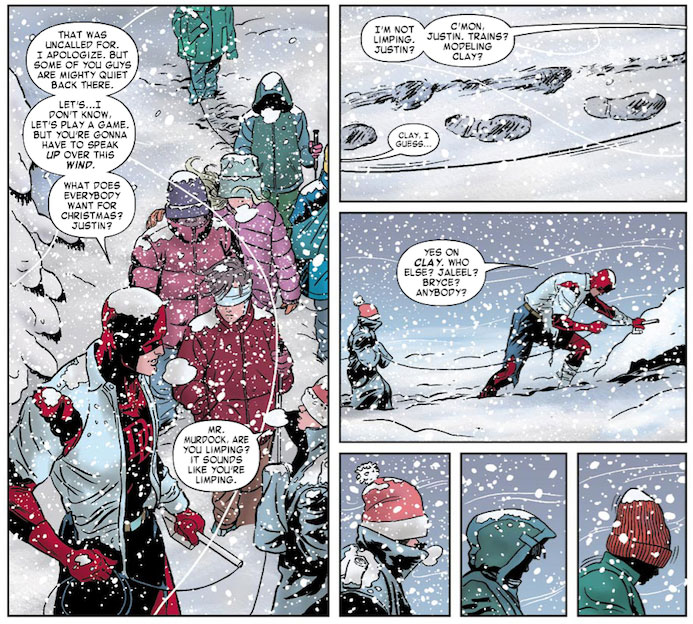 For a solidly entertaining revised approach to a classic character one probably couldn’t achieve much better than the first collection of this series. Unfortunately, while spirited and in no way poor, this collection is a notch below. And despite almost the same title, it shouldn’t be confused with a hardback under a different cover which actually contains volumes 3 and 4 of this paperback series.

The reading is off to a good start with an Eisner Award winning Christmas story. Matt Murdock is accompanying a group of children from the blind school on a day trip. Their bus comes off the road in the snowy conditions, with fatal consequences for the driver. The result is the blind leading the blind through extreme conditions.

An element running through the first half of this series is the Omega Drive, containing all sorts of personal details about several terrorist and criminal organisations. Needless to say, each is very keen to acquire this, not only to protect their own interests, but to exploit their rivals. The Black Cat and Spider-Man become involved, and, as he often does, Waid serves up a neat twist or two.

That’s followed by a quality dip. On paper the idea of the blind Daredevil coming up against the almost sightless Mole Man must have seemed a good one, and a variation on that theme had worked very well in the previous volume. Here, though, it’s one of the weakest stories in the series. Waid’s good enough to ensure there’s sound reasoning behind Daredevil’s involvement, but after all these years the Mole Man’s motivations don’t really hold up.

The data drive plays a part in the final content, in which Waid again cleverly places Daredevil, or Matt Murdock initially, in an environment where his enhanced senses are considerably disabled. That’s drawn by Khoi Pham, a versatile artist who modifies his own style to render the pages in a manner approximating the style established by Paolo Rivera and Marcos Martin. That’s also the case for Kano, but Emma Rios, who illustrates the Spider-Man chapter of a crossover has an approach more in keeping with that title, and it’s a jarring contrast to have extreme close-ups prioritised.

Rivera bows out with the Mole Man stories, which is a great shame. He’d concluded that he’d be better off working on material he owned rather than on company-owned characters for a page rate. It might have been considered he’d be very difficult to replace, but as it turned out…