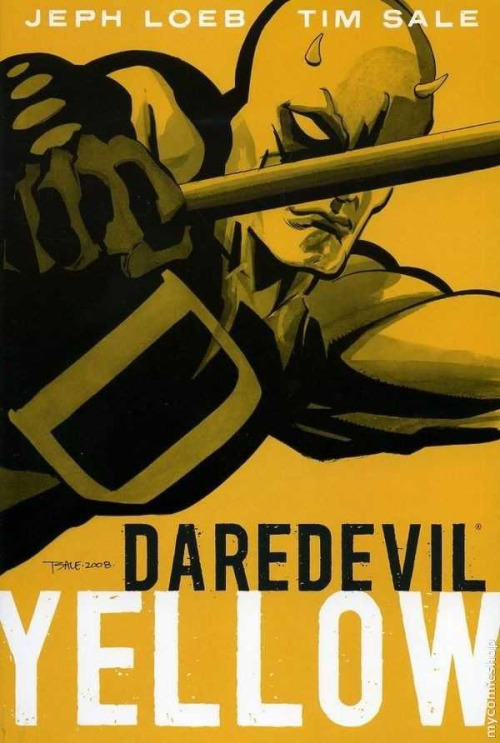 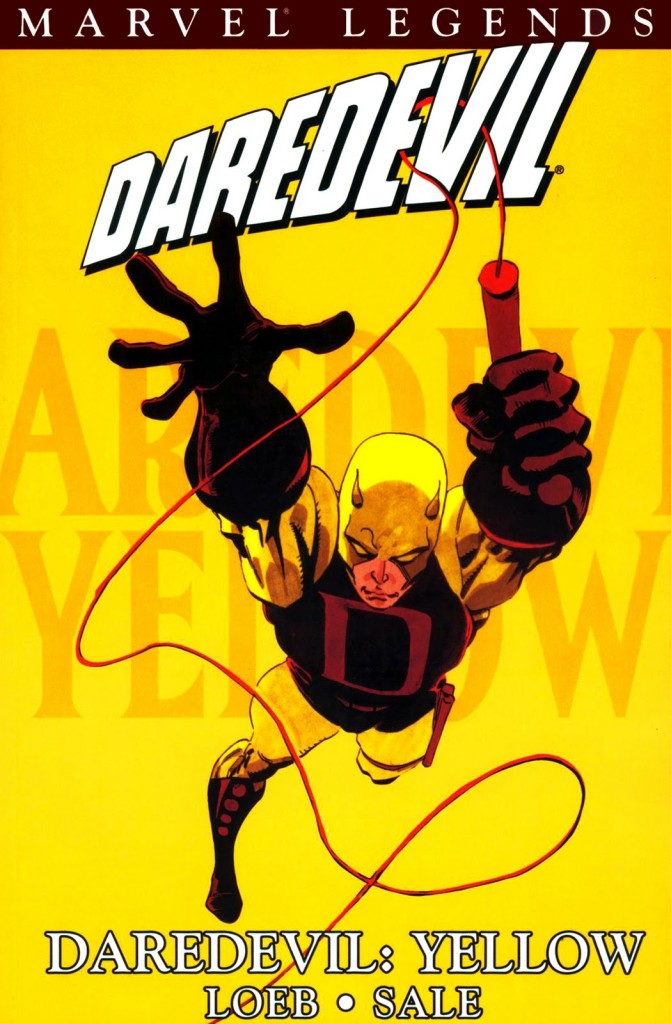 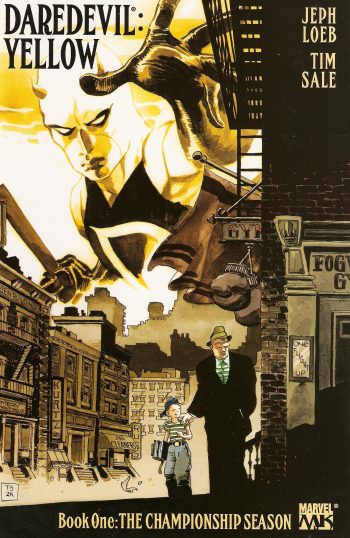 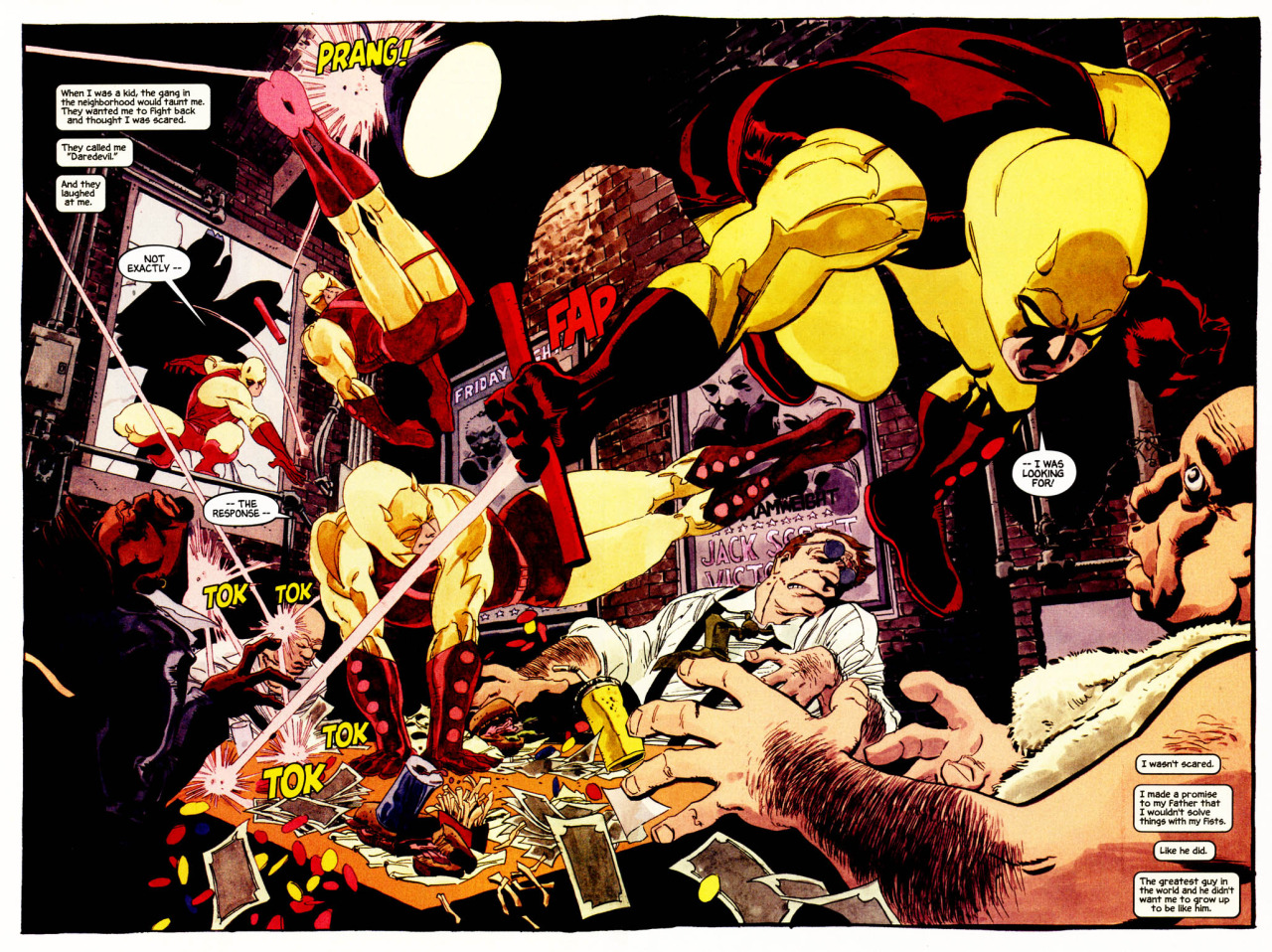 Yellow is not so much a reworked origin story of Daredevil than it is a homage to that original story, when in Daredevil first outings his costume was predominantly yellow. The earliest work of Stan Lee and Bill Everett on the character is the basis for this story, written by Jeph Loeb and pencilled by long-time collaborator Tim Sale, with yellow the favoured colour. It’s a companion piece to their previous Spider-Man and Hulk stories, titled respectively Blue and Grey.

Yellow centres around Matt Murdock’s relationships with his first love Karen Page, his father Jack Murdock, and friend and business partner Foggy Nelson. To process his grief after Karen dies, Murdock/Daredevil pens a series of letters telling Daredevil’s story in flashback. It doesn’t start at the very beginning when Matt loses his sight, but rather with his father Jack’s boxing career and murder. It’s about the early days of Daredevil rather than a re-imagining like Frank Miller’s version.

The writing lacks that ‘loving feel’ for Daredevil that Miller has (this is Loeb’s first and last outing on Daredevil to date) and is more of a tribute to Daredevil’s creators. It scores, though, with honesty and realistic rendering of how emotions like grief and love can drive us and leave their mark on us. It’s also about friendship, specifically Matt’s friendship with Foggy Nelson, and how this remains a major cog in the Daredevil story despite their tensions and disagreements. These two men have a genuine love and respect for each other, easily overlooked. When all is said and done, Matt’s lovers have come and gone but Foggy has always remained.

Tim Sale’s art is a thing of beauty, simultaneously redolent of a 1960s style and a distinctly modern feel. It’s classically Daredevil in its simplicity with large and flowing frames. Sale captures the essence of the story in a sincere and emotional way, never out of step, and bringing an old-school cool to Daredevil and a deep and creepy eeriness to the villains.

The colour yellow comes into its own here, rarely so beautifully applied. At times it’s a sweeping background, at others a smidgeon in a dirty wash of greys, browns and blues. It might be that a sound effect is coloured yellow, giving that particular sound a sharpness, emphasising it so that you almost hear it, especially when yellow has been absent for two or three pages before masterfully popping into the frame. Matt Hollingworth is a magician, not a colourist. That’s the only way the colour yellow could be explained as being brooding, dangerous, ominous, breezy, joyful and hopeful without skipping a beat.

What Yellow does well is encapsulate the real origins of Daredevil making it a good starting point for newcomers to the character. Stan Lee is quoted as saying that the thing he wanted to portray most in his characters were their feet of clay – their humanity. And despite displaying those feet of clay so vividly, Yellow still shows us Daredevil is ‘The Man without Fear’.