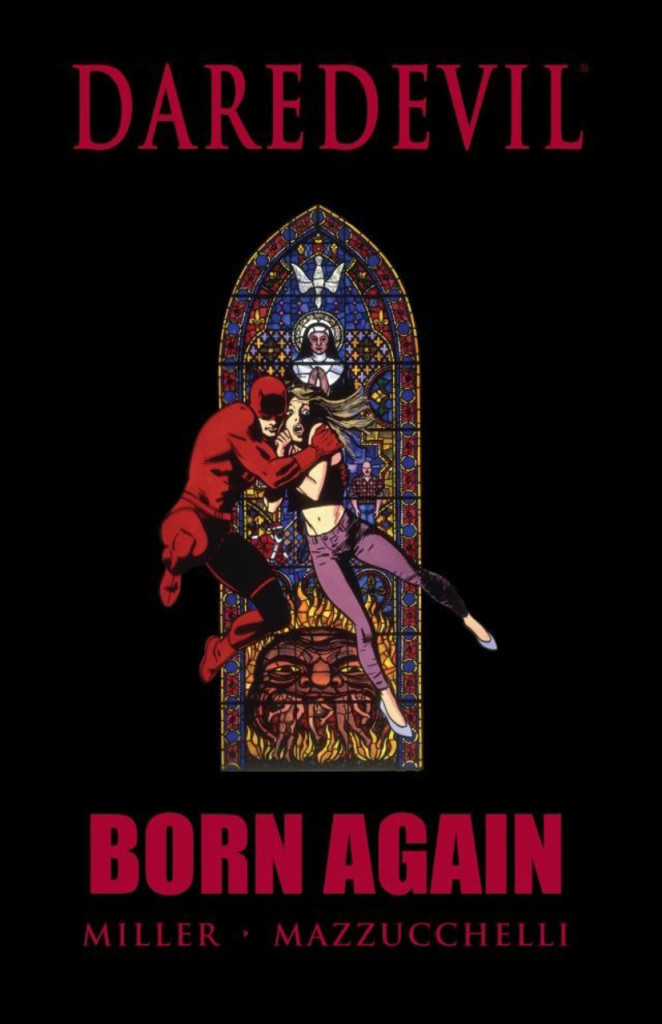 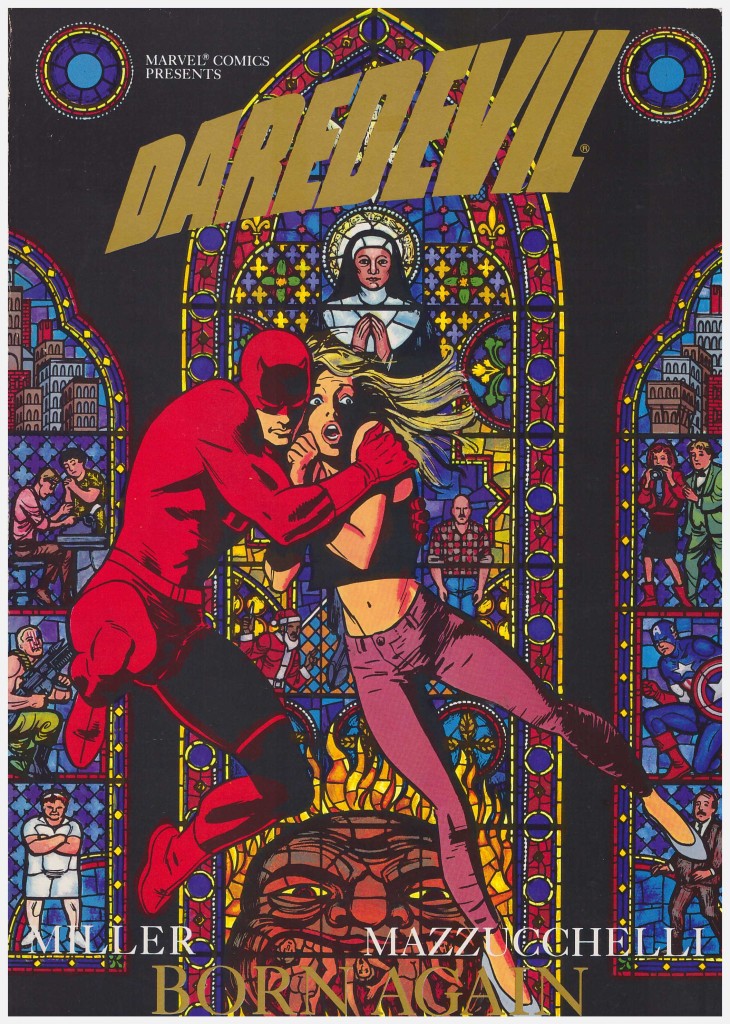 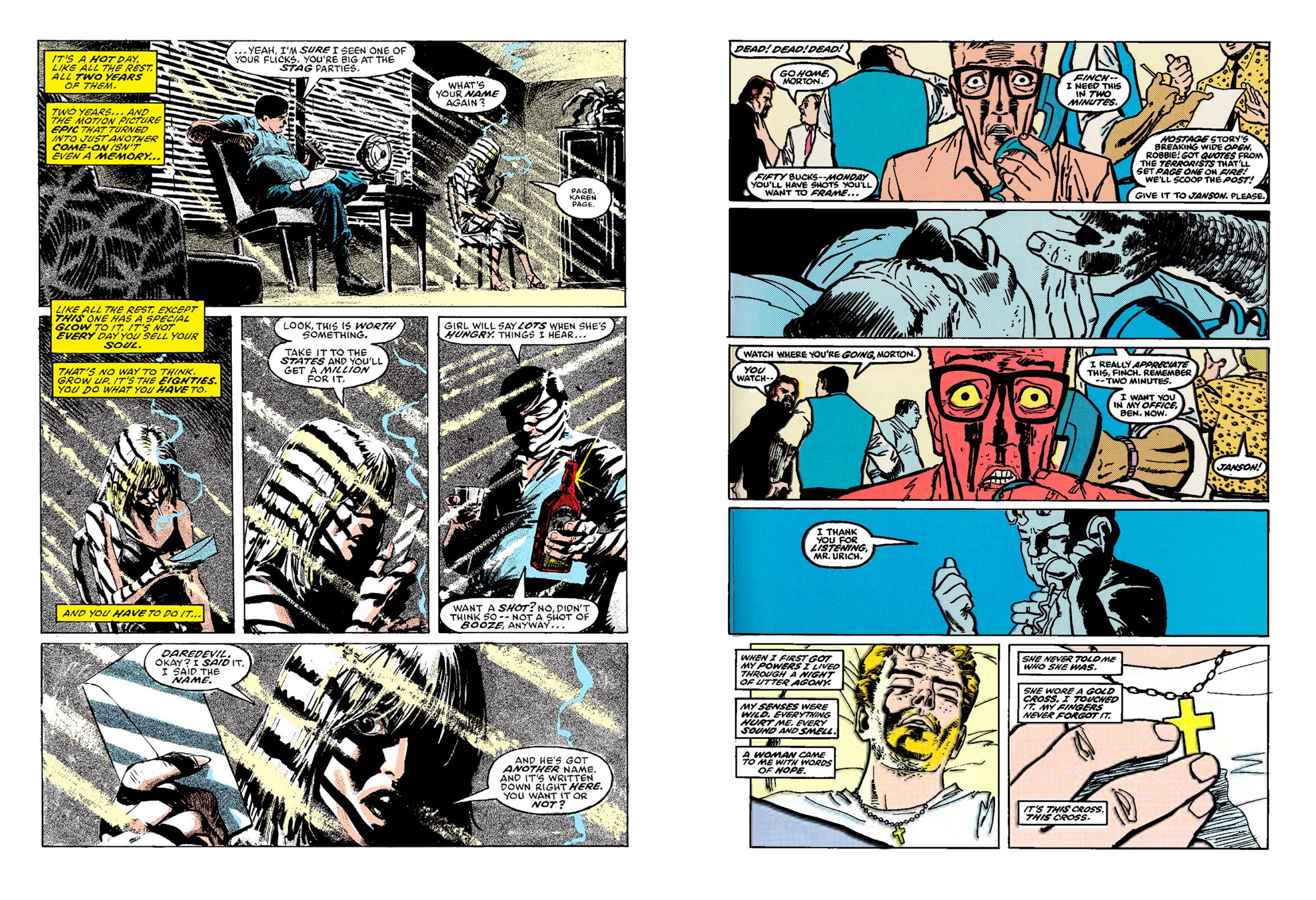 Having completed a lengthy and critically lauded run on Daredevil, it might have been considered a risk for Frank Miller to return to the title three years later, yet return he did, as writer only, and the thriller he crafted matches the best of his earlier work.

Part of the reason Miller agreed to return so readily was his enthusiasm for the artwork of David Mazzucchelli, who’d been drawing Daredevil for just over a year. He admired the clarity of storytelling and the emotional depth Mazzucchelli with which endowed his cast. For his part Mazzucchelli can’t have helped being influenced by Miller’s rendition of Daredevil, but also brought his own sensibilities, and has a finer line.

Working from a full script by Miller, but not layouts, Mazzucchelli’s pages are in Miller’s atmospheric style, yet not imitative, and featuring some interestingly conceived parallels. Matt Murdock in bed is an image repeated in almost every chapter, and the bed he’s in or his posture, guides us through his degenerating circumstances. A scene with reporter Ben Urich listening to a distressing phone call has almost Krigsteinesque sense of static design about it, and there’s a balletic flow to his action sequences.

The item that sets the plot in motion is a piece of paper delivered to the Kingpin bearing confirmation of Daredevil’s civilian identity. For long time readers of Daredevil the source of this accurate information is in itself a shock, and a statement, and with it, the Kingpin manages to dismantle Murdock’s life in a chapter. This is required for the redemption of the title to occur, but it’s a title that doesn’t exclusively apply to Daredevil. It’s cleverly mirrored as a theme for almost all the prominent cast members.

Born Again was published almost simultaneously with the Dark Knight Returns, and yet that’s perpetually on the bookshop shelves, while this drifts in and out of print, its reputation not sustained. That’s puzzling. Introduced toward the end, the uber-patriotic Nuke is hardly a subtle pastiche, but the same could be said of the Joker in Miller’s Batman story, which isn’t considered a fatal obstruction to greatness.

This is still a taut and compulsive read, requiring no reference to Miller’s previous work on Daredevil. The narrative is caption-led, and there are an abundance of excellent elements: the consistent reminders of how far the Kingpin can reach; the return of Karen Page, former secretary to Murdock and Nelson; the characterisation of newspaper publisher J. Jonah Jameson; the intimidation of reporter Urich, and most of all that it’s never at all obvious where the plot is heading.

There may be some disappointed that the deconstructive aspects ensure Daredevil is barely in costume, but when you’re getting something this good overall why should that be of any concern?