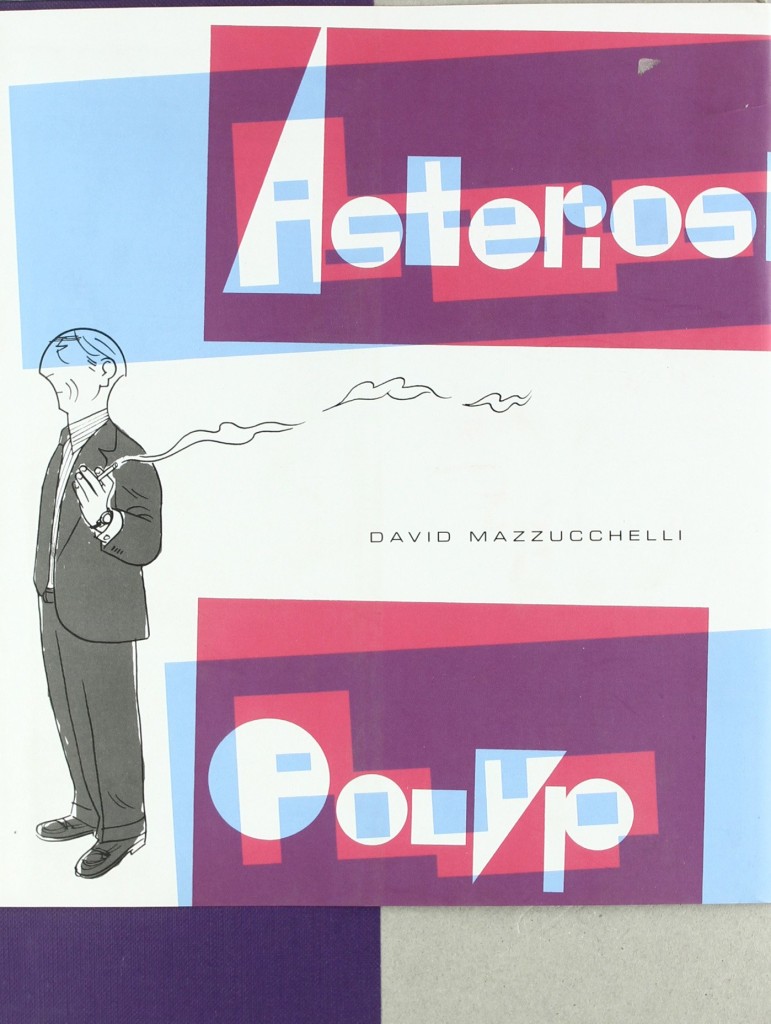 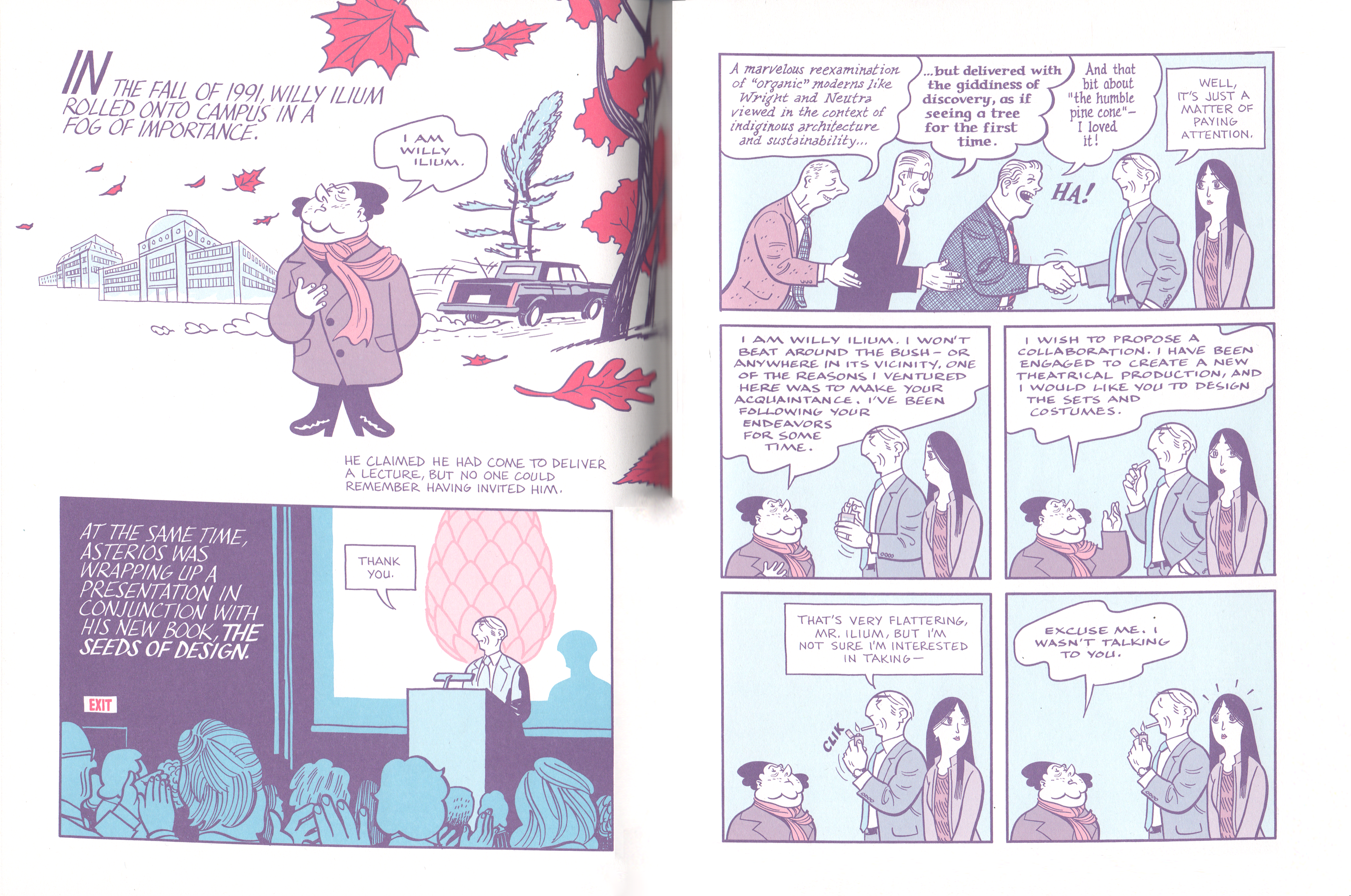 David Mazzucchelli had early successes, first in mainstream comics, working with Frank Miller on Daredevil: Born Again, and the acclaimed Batman: Year One. His self-published Rubber Blanket, saw him move towards more personal material, and he followed this by working with Art Spiegelman, and Raw alumnus Paul Karasik on the brilliant adaptation of Paul Auster’s meta-novel City of Glass.

He was largely absent from comics for fifteen years, until, the publication of Asterios Polyp was announced. What exactly was this new book going to be…?

The title character is a ‘paper architect’ praised for designs never built. He’s now a lecturer, and approaching fifty – all rather like Mazzucchelli at the time – and we were yet to see the full realisation of his obvious talent.

It starts with black clouds, and a thunder storm. The ‘camera’ zooms in to show us Polyp in his stylish yet neglected apartment enjoying some late night subscription TV. No, in fact he doesn’t seem to be particularly enjoying it. The storm will destroy his apartment, and trigger a new phase in his life.

Mazzucchelli’s seemingly effortless visual prowess is on display from the start. The black clouds are painterly, reminiscent of Abstract Expressionism –  rooted in Europe but born, like Asterios, in post-war America. Then the scenes of the buildings and lightning are remarkable in their graphic simplicity. As we see into his designer apartment, it’s drawn in a ‘clear-line’ style like Hergé, but with some rough edges reflecting it’s current messy neglect. We’ll revisit this scene in flashbacks to various, more pristine moments. One incongruous element amongst the straight lines is a kidney shaped table, which we later find out was brought by his wife to be.

Polyp likes to describe the world in dualities, and there seems an implicit one between old learned Europe and modern, vital America. This is Homer’s The Odyssey – American style. Odysseus’ epic journey back to his wife in Ithaca, is mirrored in Asterios’ metaphorical journey back to his wife and the other Ithaca – the college town in upstate New York.

Also like The Odyssey, this begins in the middle, with stories and flashbacks revealing events leading up to that point. In the present we see Asterios leave everything behind to go lose, and ultimately find, himself. The flashbacks mostly focus on his developing relationship with Hana, a young Japanese/German artist, from their meeting, through marriage, and beyond.

At times the classical source is Orpheus in the Underworld, as Hana designs a stage production, and later Asterios (holding the legendary lyre) seeks Hana deep in the New York City subway.

Mazzucchelli’s use of colour reflects his experience in printmaking. The pages are mostly restricted to two colours at a time. Polyp’s ascetic later life is purple and warm yellow, with overprinted shades yielding murky ochres and browns. In contrast the earlier scenes with his fulfilling career and blossoming love-life are a more appealing cyan and magenta, blending to a range of lush purples and violets. Often, continuing the theme of dualities, we see Asterios purely in blue, drawn architecturally with exact lines constructing cylinders, and Hana in pink – a more intangible image of light and shade rendered in loose, sketchy, daubs.

Every aspect of the medium is used here: composition, settings, acting, sequence, rendering, lettering, montage, symbolism – and all sensitively supporting the story.

This is bold in literary and artistic ambition, dazzling in realisation, and satisfying in conclusion. Mazzuchelli’s early potential is fully and convincingly realised. The book won the LA Times Book Prize in the graphic novel category.