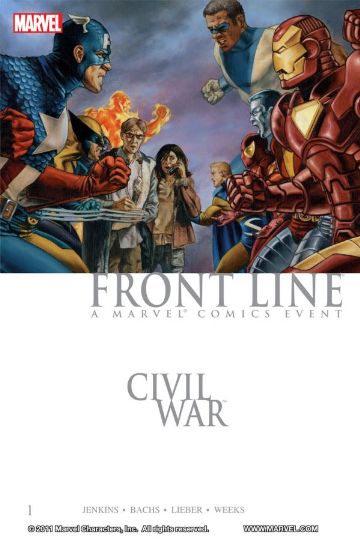 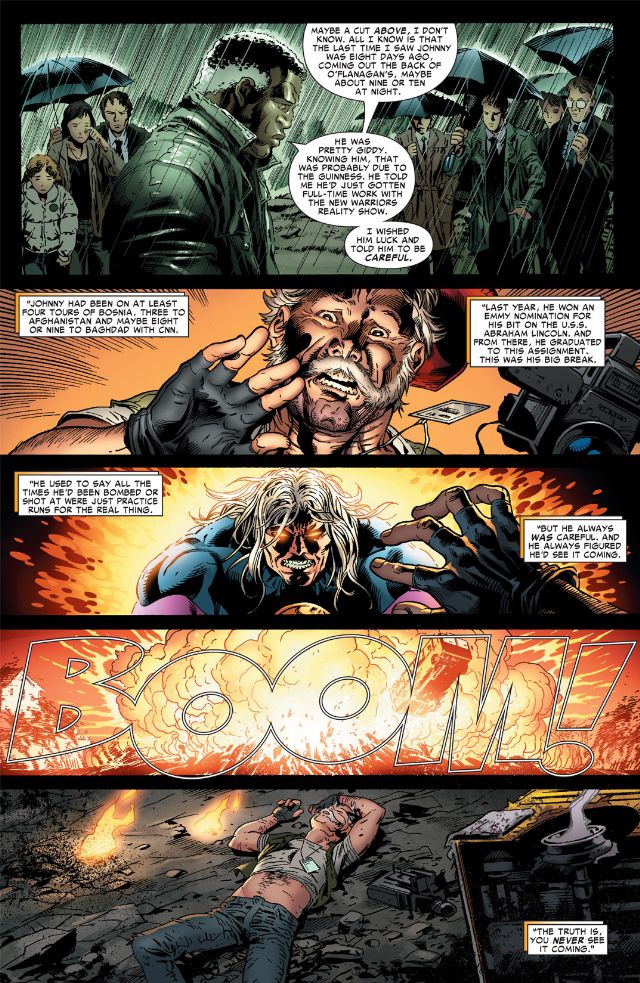 Civil War turned the Marvel Universe topsy-turvy, then proceeded to pull the emotional guts out of every single hero from the mainstream to the obscure in a number of tie-ins. Its strength as a series was making it so redolent of the contemporary American zeitgeist that it polarised the readership into factions supporting #teamcap or #teamstark, long before Captain America: Civil War (movie verison) hash tagged it. In an unusual departure from the norm, writer Paul Jenkins was given carte blanche to pen Front Line as a parallel to American politics of the day.

Opening at the funeral of cameraman John Fernandez killed in the Stamford disaster that sparked the crisis, journalists Ben Urich and Sally Floyd sit at his wake discussing the inevitable Superhero Registration Act and how they believe it will change the face of the country. Although friends with mutual respect, they’ll be on opposite sides of the debate. Ben will be covering the story for the right-leaning pro-registration Daily Bugle, while Sally will be writing for the liberal anti-registration sympathising paper The Alternative. Sally wryly observes that it doesn’t really matter what they write, jingoism has already supplanted journalism and civil liberty has been traded for civil comfort. While everyone seems to be picking a side, why is no-one asking who stands to gain from this? When Ben and Sally do, why are they hampered at every turn by colleagues, the government, even the heroes themselves? Likewise Robbie Baldwin (Speedball), one of the participants in the Stamford Disaster, wakes up to find himself the only survivor and the most hated man in America. He’s gone from celebrity to pariah, held under questionable circumstances and his presence seemingly swept under the carpet. By the end of Volume 1 Ben is looking over his shoulder, Sally has to reconsider her black-and-white position, and Robbie will discover that justice is interpreted and served by emotional human beings.

Unlike Civil War, Frontline focuses on obscurer heroes and what motivates people behind the scenes, filling in the blanks of its main title, and Paul Jenkins pens interweaving perspectives. ‘Embedded’ focuses on Ben’s and Sally’s respective reportage on the Civil War angle from both sides with a style evoking warzones and battlefields, artist Ramón Bachs expertly capturing scenes of journalists running through the debris-strewn scenes of New York with helmet and flak-vests as opposing sides duke it out.  ‘The Accused’ looks at Robbie Baldwin’s fall from grace, his incarceration parallels holding people suspected of terror activities at Guantanamo Bay, illustrated with a grey gritty edge to reflect the environment by Steve Lieber. ‘The Program’ looks at Norman Osborn’s recruitment with work by Leondro Fernández. ‘Sleeper Cell’ references terrorist activities in the post-modern era with eerie atmosphere by Lee Weeks. Still other short stories draw parallels between historical conflicts and events in Civil War through the use of poems, songs, journals and letters. The artistic styles are similar enough that they don’t clash, but simultaneously different enough to set the stories apart. You can’t read Front Line without Civil War to make sense of the story, so it doesn’t stand apart on its own and is ultimately weakened by that.

While the stories have lost some emotional heft due to the passing of time, they remain thought-provoking and interesting commentaries on a very emotional and complicated period of American politics. The series continues in Civil War: Front Line Volume 2, and both volumes are collected in 2016’s bulkier Civil War: Front Line.