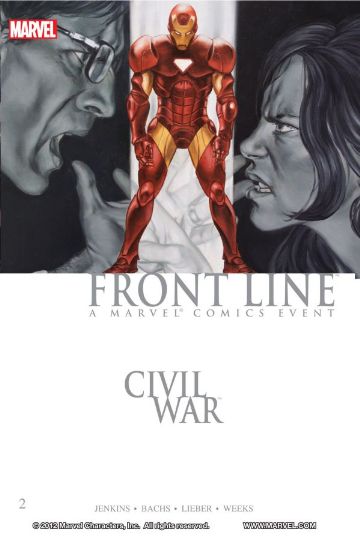 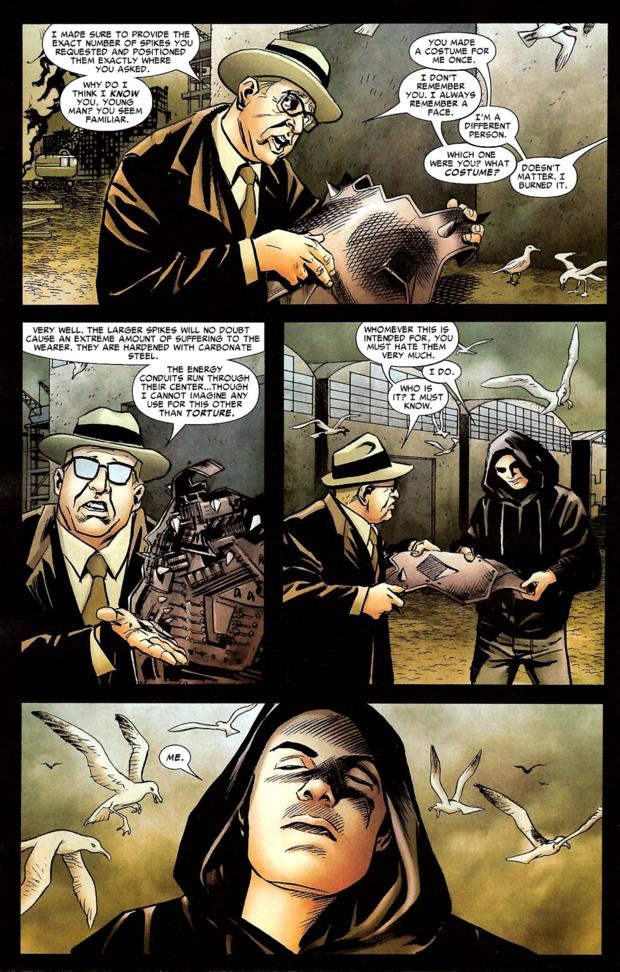 Front Line Volume 2 places Daily Bugle reporter Ben Urich as the eye-witness to tragic events at Robbie Baldwin’s (Speedball) capitol hearing. He’s testifying regarding his actions that sparked the superhero Civil War. In the aftermath, Urich’s hunch that the side favouring registration of superheroes and their civilian identities may just have started recruiting the imprisoned has terrifying consequences. Meanwhile fellow journalist Sally Floyd has an uncomfortable discussion with someone she loves to hate, and considers if she and the anti-registration groups might be out of touch with the people whose interests they claim to be defending. Robbie has to face up to the reality of his situation and the unpleasant way in which his powers are re-emerging. Someone is profiting from this civil war, but when you follow the money where will the trail end?

Paul Jenkins winds up this candid observation on American politics and society in the years post-9/11 in his thought-provoking companion series to Civil War. Mark Millar had Marvel’s major players picking sides, while Jenkins peeks behind-the-scenes to hidden events and bit players in the saga. Given carte blanche to reflect real world American politics of the time, he unpicks the political motives behind hero registration with some uncomfortable questions and revelations. Jenkins has produced a thoughtful, bold, and well-handled cerebral story from beginning to end, less focused on action and more on the motivators of human choices and emotions. What would have improved it is if Jenkins could have avoided censoring his dialogue, as some of the language is old-fashioned. Even the occasional use of profanity would have heightened the sense of passions railroading common-sense and calm, but it’s sensible and measured considering the levels of high stress his characters face.

The various artistic talents of Ramón Bachs, Steve Lieber, Lee Weeks, Eduardo Barreto and Frazer Irving generally work well together with Civil War’s more grown-up aesthetic and the grim reality of war on your doorstep. The art reflects the nature of the situation, at least in the Ben Urich and Sally Floyd-centric stories, which are less action focused, but the environment creates the mood. The Robbie Baldwin story ‘The Accused’ suffers from his exposure to horrific violence, with Lieber still portraying him as fresh-faced and handsome a few frames later. Granted Baldwin heals fast, but his physical presentation just doesn’t match reality, even contradicting Robbie’s evolution into Penance.

In the political climate of the time this led to accusations of being unpatriotic, evident in the last short story where the English Jenkins pens a personal story attempting to dispel these notions. Interconnecting events with an historical context helps too, and this is a refreshingly honest observation, uncharacteristically so for the usually more conservative Marvel. It’s more recently been collected with Volume 1 to present the entire tale in a single graphic novel, Civil War: Front Line.