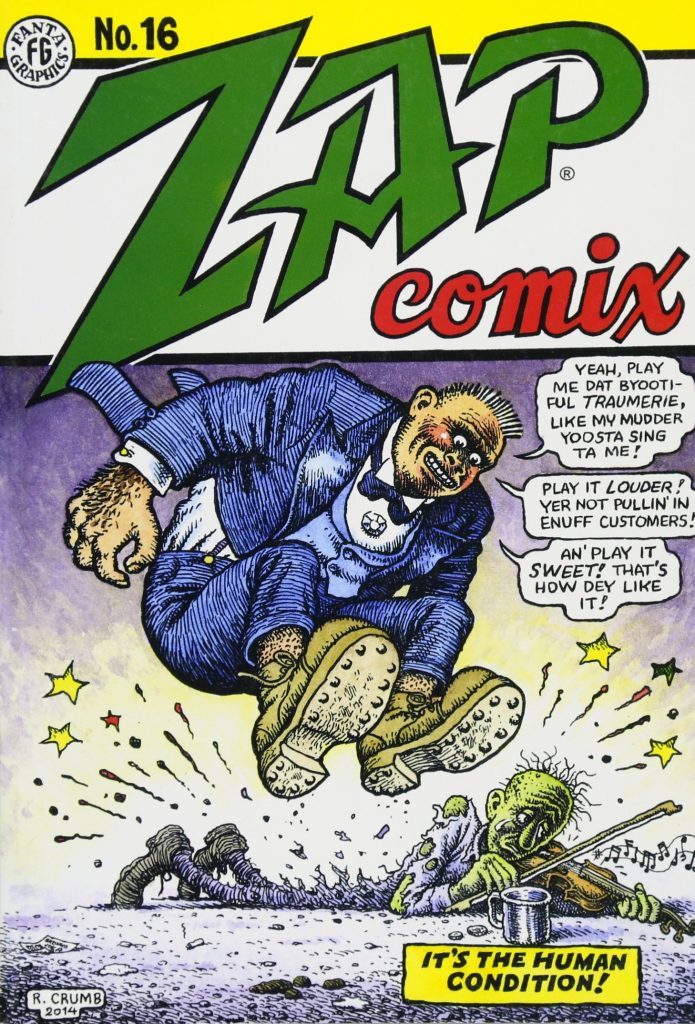 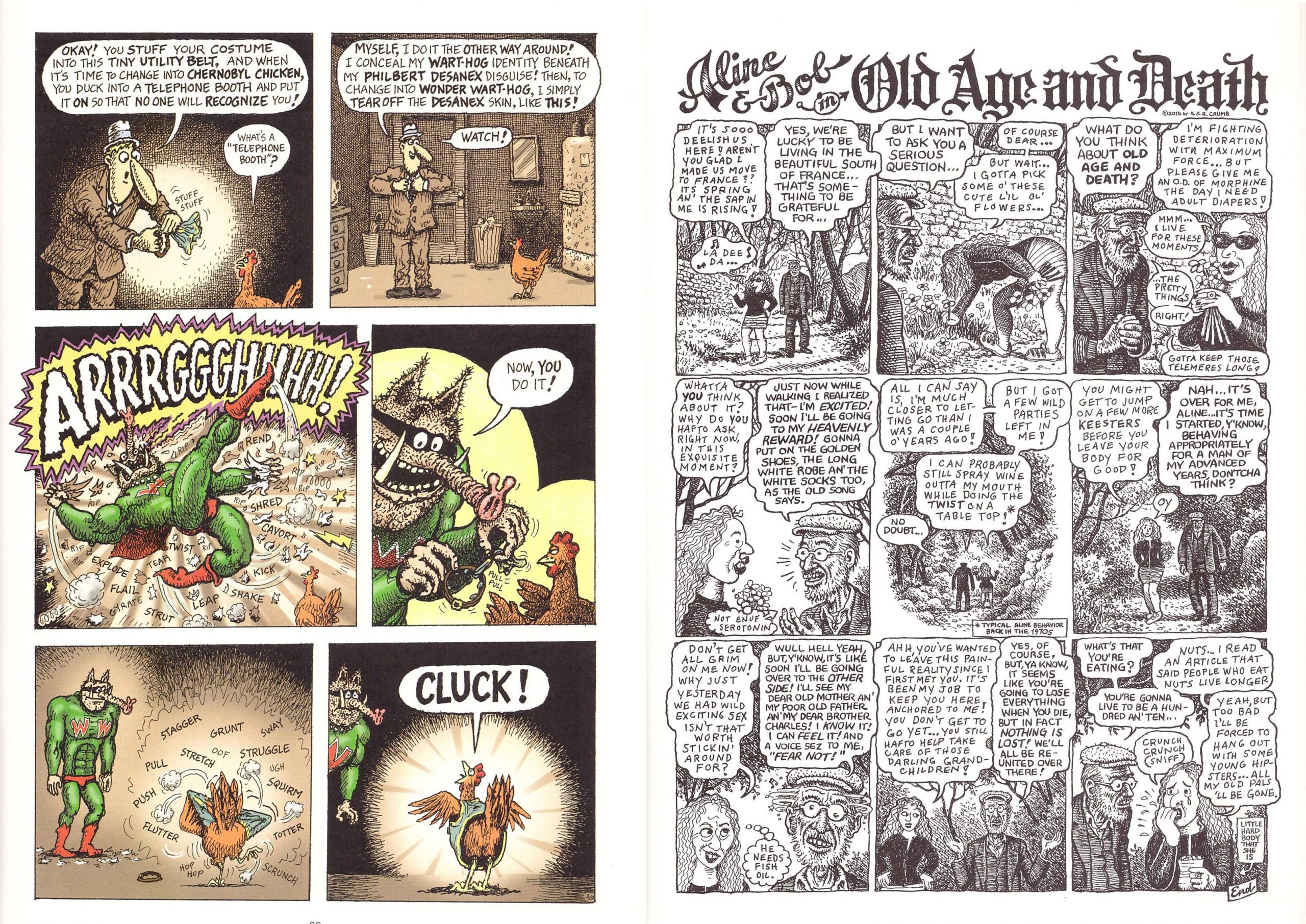 Although begun as a Robert Crumb solo project, for the second issue in 1968 Crumb gathered the cream of Underground comic creators around him, forming a collective that have had their differences, but congregate every few years to turn out another Zap. Not a single one of them would have believed in 1968 that they’d bow out almost forty years later with a 96 page squarebound book collection.

As has long been the case, and was memorably aired in 2004’s 14th issue, any unity of creative vision has long passed. Victor Moscoso and Robert Williams have moved into different areas of fine art, while S. Clay Wilson and Gilbert Shelton have barely progressed at all, good then and good now. The personal strips Crumb produces have for decades no longer required the distancing devices he used in the 1960s, many here produced with wife Aline Kominsky-Crumb, and over the years Spain Rodriguez moved closer to Crumb’s memoir material. He, though, had died by publication, accounting for his longer strip not being entirely finished.

So, between them, is there any remaining mojo about the seminal creators of the 1960s? At first it seems not as assorted sketched and nonsensical pieces dated up to twelve years before publication are whipped from the pending file. Several two page jam strips are novelties, but increasingly less coherent, and beyond them Williams only supplies the inside back cover whimsy. There’s a nod to also now dead original contributor Rick Griffin and his replacement Paul Mavrides’ solo contribution is four sketches on book pages. Then again, as clearly stated in Zap 14, some contributors are no longer interested, and how many of them have anything to prove anyway?

Moscoso’s enigmatic knockabouts are as they always were, and Spain’s two strips are very different, the better of them the two pages of musings as he wanders through San Francisco, melancholy, yet understanding about change. Given how the 21st century has been for S. Clay Wilson, we’re lucky to have any work from him, and the maniacally dense ‘Last Call at a Pirate Pub’ from 2007 could serve as a valedictory encompassing of his provocateur career. His post 2008 style on other strips is simpler.

Shelton delivers both a Wonder Warthog and a Freak Brothers story, the first solo in colour, the second collaborating with Mavrides, only the slightly tighter cartooning giving away they weren’t produced in the 1960s. They’re everything you’d want from Shelton, funny and ridiculous, and extra marks for turning Phineas Freak into a suicide bomber.

As the creator most invested in Zap, Crumb supplies the most pages, eight of them considering life alongside wife Aline in jointly created strips. They’re charming, but trivial, evidence that comfort dampens creativity and that the concerns of seventy year olds are far removed from their younger selves. The sparks come with the reminiscing, shifting the emphasis from Botox treatment and adverts for Serbia to a final strip considering Aline’s arrival in Zap and looking back at its history. The Crumb solo strips are largely from the drawer, although the utter despair of ‘The Unbearable Tedium of Being’ is vintage, even if walking a well trodden path for Crumb.

With the possible exception of Shelton and newcomer Kominsky-Crumb, all the Zap creators have delivered better work in earlier issues, so this is perhaps best sampled as part of the Zap box set, for which it was created.