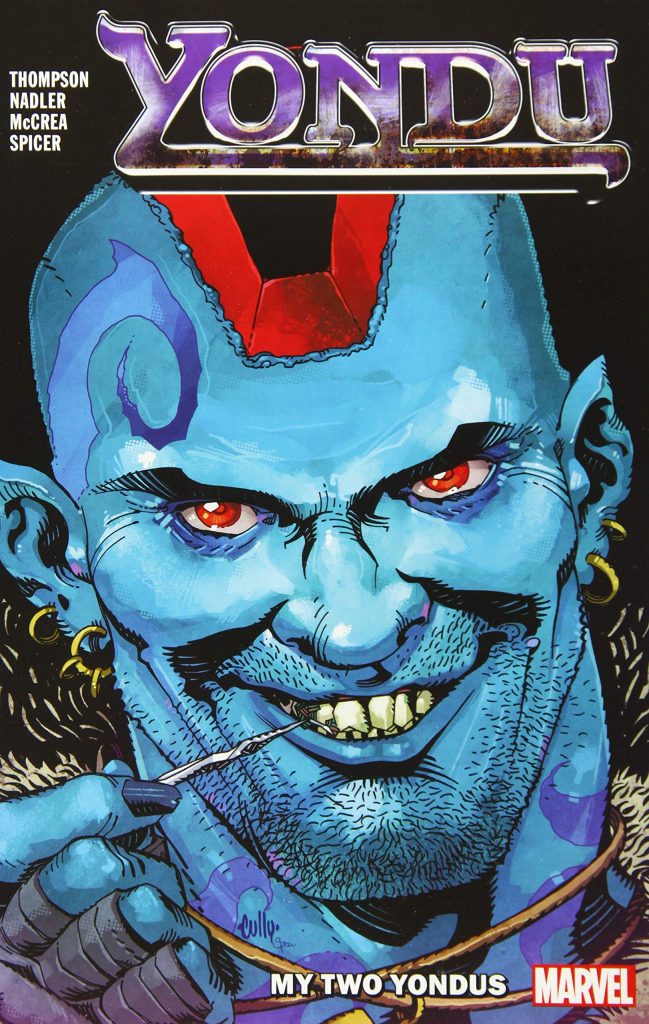 Beyond the team name, the one aspect of the original 30th century Guardians of the Galaxy that survived to make it into the movies was Yondu. His personality was given a makeover to become a gritty space pirate, memorably played by Michael Rooker as a less cuddly Han Solo, but he was still a blue-skinned alien capable of controlling arrows by whistling. In the movies he was only ever seen on his ship, but the writing team of Lonnie Nadler and Zac Thompson open by concentrating on the downside of a space pirate’s life, the lonely existence trusting no-one, being on everyone’s hit list, and the hand to mouth strain of remaining one step ahead. The writers then complicate his life further by having his more virtuous descendant turn up from the future at the point where he’s about to hit the jackpot.

John McCrea really sells Yondu’s seedy existence, drawing him as a craggy, surly individual circulating around the grimiest places on any planet, the droppings almost falling off the pages as you turn them. Everything he has is make-do, and Yondu almost defines his environment by his presence. The space scenes are a glorious pinball ride as Yondu’s forever being chased or flying into danger,.

Yondu from the 30th century adheres to the beliefs of his people, and the writers exploit the clash of that spiritualism with his ancestor’s selfishness. Their outlooks are entirely incompatible, but it doesn’t stop the more reasoning Yondu from attempting to explain an orderly path, and along the way we learn the circumstances that drove the 21st century Yondu away from his race and their beliefs. How is it then, that Yondu’s name survives a thousand years associated with heroism? The way Nadler and Thompson generate that is clever, if tragic, and after Yondu meets Yondu the present day version is different.

Anyone who’s enjoyed Yondu’s presence in the films ought to enjoy this solo outing.