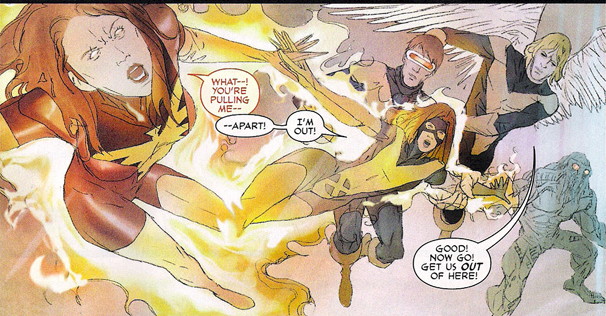 Following on from X-Men First Class: Mutant Mayhem, Band of Brothers is the slimmest of the First Class collections, presenting a mere five chapters.

Writer Jeff Parker continues his run of solidly inventive stories, and with this volume delivers a tale of the unexpected as the original X-Men meet Florida based swamp monster Man-Thing, a character introduced well after the original team has disbanded in Marvel’s regular continuity. Not that it particularly matters in the midst of a decent story, but Parker contrives a plausible reason for the anomaly. Guest artist Eric Nguyen draws, and his figurative style contrasts regular artist Roger Cruz’ tendency toward cartooning, but works equally well. The overtly cartoon distortions supplied by Craig Rousseau for a Cyclops solo story are altogether less satisfying.

Parker also revisits the friendship between Marvel Girl and Scarlet Witch, an interesting addition to the X-Men mythos, yet one that sits easily in the period between her abandoning the Brotherhood of Evil Mutants and joining the Avengers. He further involves the early net costume and masked version of the Black Widow, in a conflict between S.H.I.E.L.D. and Hydra, and the book starts with a two-part story in which the X-Men have to battle dozens of Sentinels. The deck is stacked as the X-Men have temporarily lost their abilities. It’s the best story in the collection, due to the insight in revealing that the early X-Men may not have entirely been at ease with their powers, and the differing ways they react to being merely human again. The fun continues in X-Men First Class: The Wonder Years.