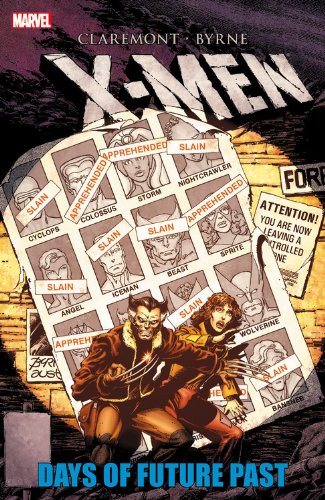 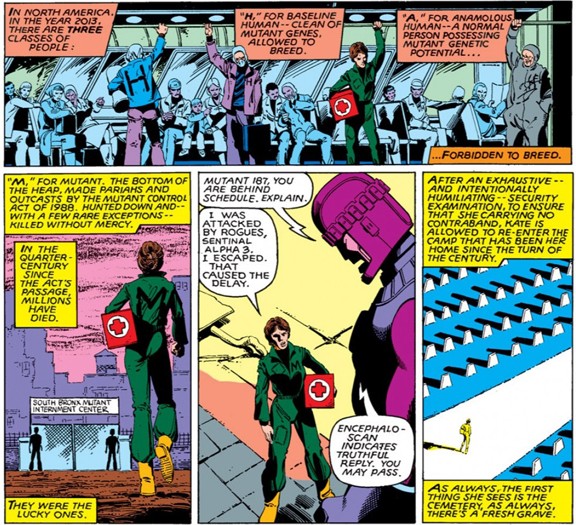 This is very much the hodge-podge collection, seemingly issued to precede the X-Men movie of the same title. Under other circumstances it would be commendable that one of the defining X-Men stories is again available in an almost reasonably priced edition, but there’s little attempt to contextualise, and the title story is surrounded by other X-Men comics that immediately preceded and followed it. A more considered collection might have included follow-ups, however much they were a case of diminishing returns.

‘Days of Future Past’ is a compressed gem. Chris Claremont and John Byrne had previously delivered their classic story in the Dark Phoenix Saga, yet these two chapters equal it for dramatic tension and narrative chutzpah. In the bleak future of 2013 mutants have been hunted to near extinction by giant robot Sentinels and those who control them. Surviving mutants scratch out an existence, their powers removed, in work camps and ghettos. A desperate last chance to prevent this era occurring is to send an adult Kitty Pryde back to the past, to the time when her teenage self had just joined the X-Men.

The tipping point is Mystique’s Brotherhood of Evil Mutants assassinating a Senator with mild anti-mutant concerns. If that can be prevented, events will play out alternately.

There are dated elements; the frequent use of expository thought balloons, some cloying pet names, Claremont’s prolix script, and fully 25% of the tale is an extended superhero battle. None of this, though dissolves the suspense of a thrilling plot with a present strand and a future strand. Byrne’s 2013 is a bleak, rubble-strewn nightmare, and his X-Men a graphically sleek cast.

That applies to the remainder of the material, except for John Romita Jr illustrating the X-Men descending into Dante’s Inferno. It’s a weak story, and Romita Jr, while technically good, was producing cluttered compositions and yet to find his style.

Kitty Pryde is also central to a Hitchcock and Alien pastiche, and the in the remaining chapters the X-Men team with Alpha Flight to deal with the tragic mystical creature, the Wendigo. Without the strong plot of ‘Days of Future Past’ the Alpha Flight tale in particular is dragged down by the outmoded form of writing.

If you prefer a hardback presentation, the same material is spread over volumes four and five of Marvel Masterworks: The Uncanny X-Men, and the second oversize X-Men Omnibus. It can also be found on pulp paper in the black and white Essential X-Men volume two.