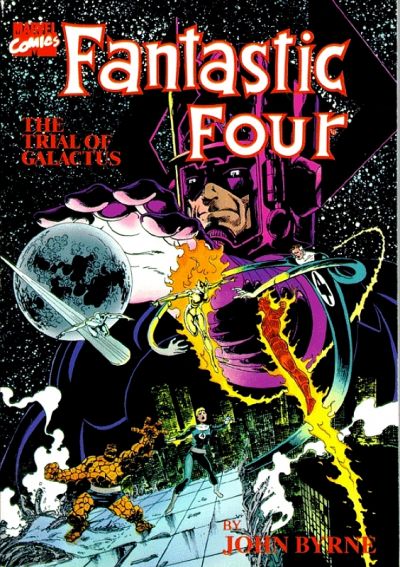 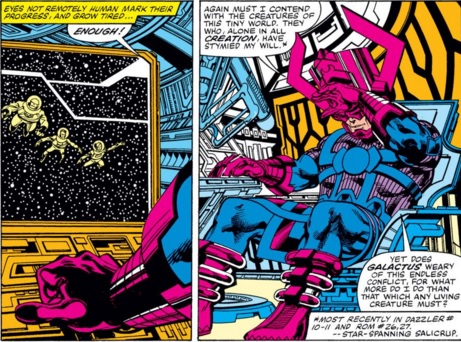 Having taken over Fantastic Four in 1981, from 1982 to 1984 John Byrne spun out a guest-star filled tale featuring one of the FF’s most significant foes, the planet-devouring Galactus. This collection extracts the relevant pages from the original monthly issues, discarding anything not directly connected to the story. A similar approach was taken with Avengers: The Yesterday Quest before Marvel realised that not only did this involve more production work than simply collecting the issues as originally published, but that the latter approach was actually what the readers wanted. It does have to be admitted, however, that this story is spread over three volumes of the Visionaries: John Byrne series.

The weakened Galactus is drawn to Earth by his former herald Terrax. Terrax is defeated, but Galactus is left dying after the encounter. Reed Richards saves him, and Johnny Storm’s girlfriend Frankie Raye puts herself forward as Galactus’ new herald, this saving Earth while Galactus is now free to roam the universe. When he thereafter consumes the Skrull Throneworld and every being on it, despite the title of this volume, Reed Richards is put on trial for saving Galactus’ life and thus dooming billions of Skrulls.

Byrne’s run on Fantastic Four was a highlight of early 1980s Marvel, a creator at the top of his game willing to innovate. The early parts of this story, with Richards asserting the moral absolute of helping the sick Galactus without taking into account the possible deaths that will follow, show Byrne’s interesting approach to the characters. And the destruction of the Skrull Throneworld, in which an established character, Anelle, former paramour of the original (at least as far as Marvel were concerned) Captain Marvel, perishes, is really quite shocking and surprising given how conservative Marvel had become.

The trouble is that Byrne can’t quite deliver the pay-off. Richards is acquitted, but the reason for this is a bit too much cod-mystical cop-out, and in the end doesn’t actually make sense.

Still, the artwork is stunning, and full of homages to the great cosmic work of Jack Kirby. These are good comics – but this is perhaps not the best way of experiencing them.