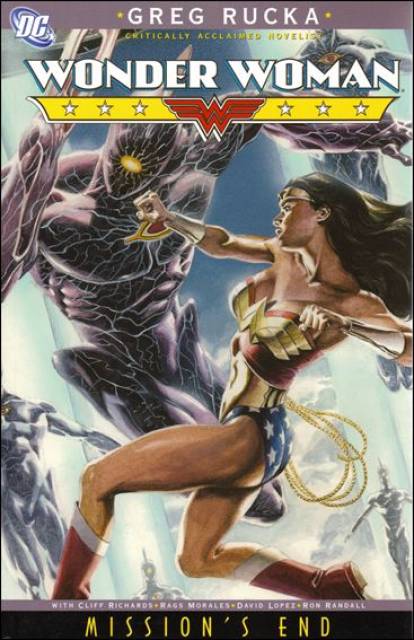 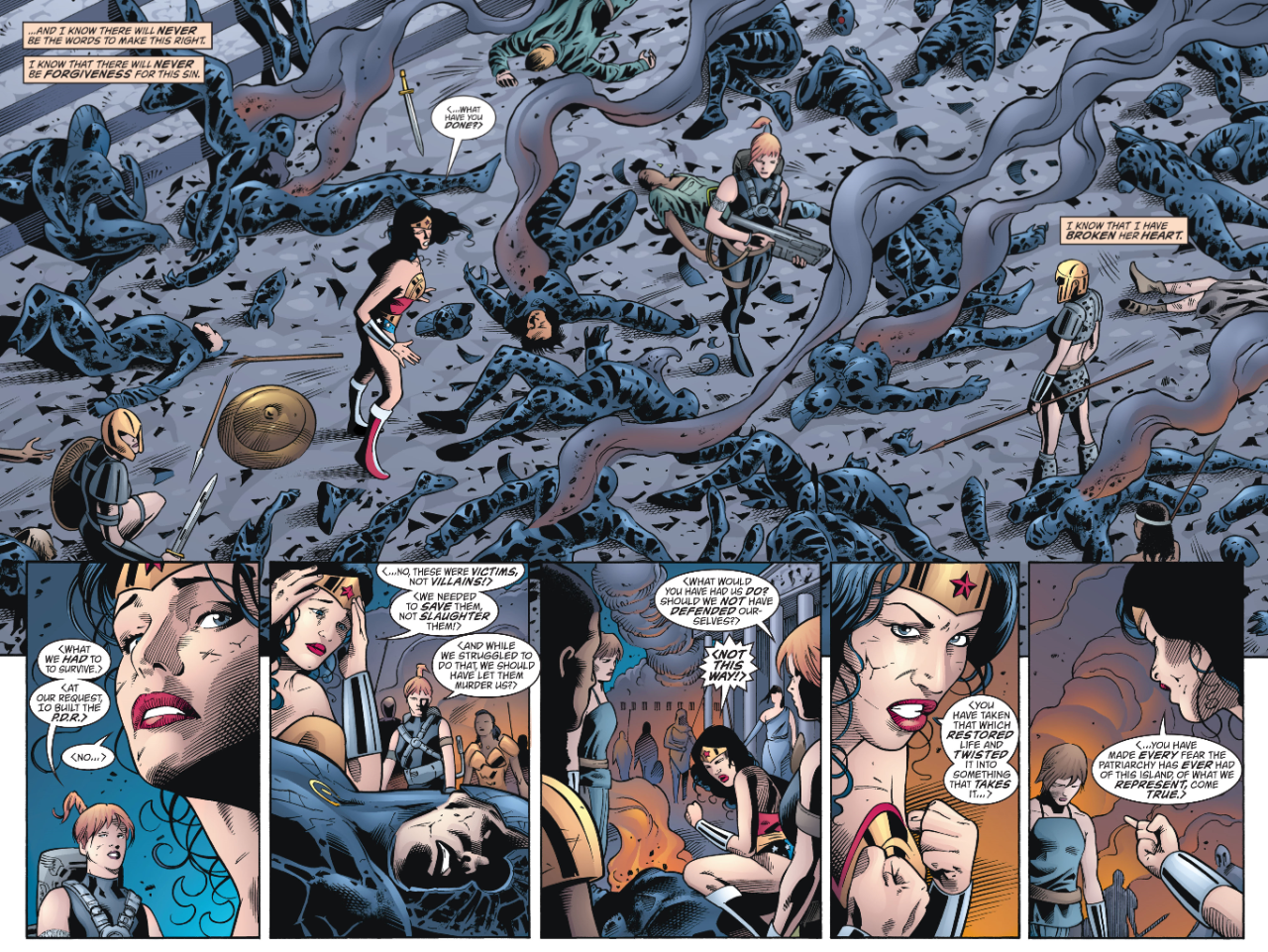 After four years of writing Wonder Woman on a monthly basis, Greg Rucka’s run came to an end in 2006. After battling the media manipulations of billionaire businesswoman, Veronica Cale, the mythical Medusa, and super villains like Zoom and Cheetah, Wonder Woman is finally brought down by public opinion. In Mission’s End, a reference to the mission she started in Down To Earth by setting up the Themysciran Embassy in Washington DC, Wonder Woman is discredited. Her decision to take a life for the greater good was secretly taped and broadcasted to the world as a deliberate act of menace. Rucka follows through logically by having Wonder Woman surrendering to the International Criminal Court in the Hague.

Some readers might feel that Rucka was constrained by the necessity for this story arc to tie in with the Infinite Crisis series, but it is a fitting finale. Rucka’s portrayal of Wonder Woman as a Madam Ambassador originated in George Pérez’s mid 1980s run on the character, and that well-remembered series was a reboot resulting from Crisis on Infinite Earths. So almost 20 years later, Rucka’s Wonder Woman ends as part of another crisis, Infinite Crisis.

There is another rounding up of the circle in a short encounter between Wonder Woman and Batman after she killed a villain to save millions. Wonder Woman tries to explain and Batman’s response is “get out”. This echoes the first Wonder Woman story Rucka wrote in 2002, featuring a previous conflict Wonder Woman had with Batman over the concept of justice.

With this conclusion Rucka is done with the ideas he wanted to explore in his four year run – the vulgarity of public life, media, perception and justice. Like the previous volumes, there is no lack of action in Mission’s End, starting with an epic battle between Wonder Woman and Superman and the sense of dread when OMAC robots attack Paradise Island.

Loose ends are tied up with the closing of the Embassy, a sad farewell to the embassy staff whom Rucka has invested in for four years. Such is his skill that there’s also a desire to know what’s next for recurring background villainess, Veronica Cale.

Various artists drew the series, and Rucka appears to have taken into account the strengths of the artist when he wrote his scripts. It’s Cliff Richards who concludes the run, and his art resembles the delicacy of Gene Colan; a poignant sent-off for the Amazon princess as Colan drew a memorial run of Wonder Woman in the 1980s. Among the three artists, Richards’ lines are most fluid, which adds to the affecting nature of the sombre ending. Also notable are the covers from the original comics reproduces in every volume. J.G. Jones perfectly encapsulates the spirit and action of the stories inside.

This five volume run by Rucka is well written and holds up after all these years. Mission’s End is tightly scripted with a satisfying conclusion that accounts for all the major and supporting characters.