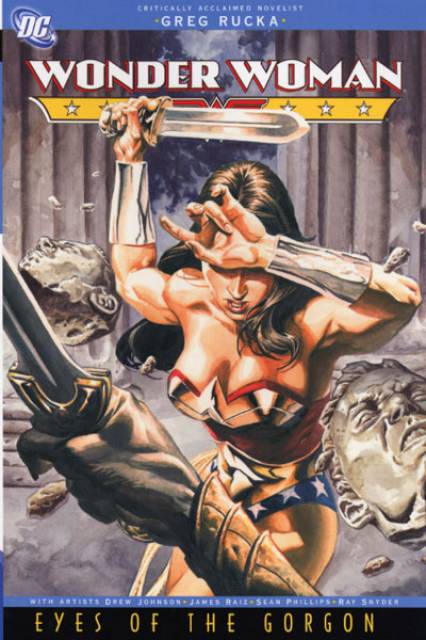 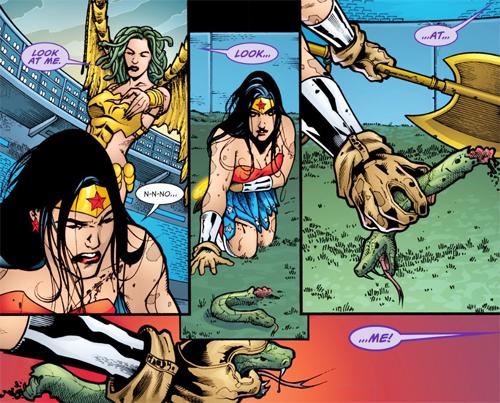 This is the high point of Greg Rucka’s four years writing Wonder Woman from 2003 to 2006. There’s  been a steady build-up, setting the stage in Down To Earth, upping the stakes in Bitter Rivals, and for this third volume, Eyes of the Gorgon, it all comes together in eight action packed chapters filled with heroism and human drama.

While Wonder Woman is still dealing with the troubles created by billionaire businesswoman Veronica Cale and trying to save the life of her friend Vanessa Kapatelis (the situation caused by Cale), in Olympus things have turned things topsy turvy. Literally. In the first volume one of the gods overturned Paradise Island in anger, and freed the witch Circe and the two Gorgon sisters, Stheno and Euryale. The three conspired to bring the third Gorgon sister Medusa back to life, setting the arena for a showdown. Rucka effectively builds up an immense sense of threat in the opening chapters. Of course, given the serialised form of American superhero comics, Wonder Woman will triumph, but there will be a heavy price to be paid.

It is interesting how easily Rucka switches between Greek mythological battles to present day fights, which clearly remind us Wonder Woman is firmly situated within the DC universe. After dealing with Medusa, Wonder Woman has to prove herself to the Justice League of America. She fights the entire JLA and holds her ground, and this volume ends with Wonder Woman taking on Zeus and Briareos. The consequences of this power shift are played out in the next volume, Land of the Dead.

The defining fight with Medusa is drawn by the regular series artist Drew Johnson, whose portrayal of Medusa supplies the villain with a mixture of pathos, pity and fear. This is all the more impressive for Medusa is a well known character from Greek myths. Sean Phillips handles the repercussions of that battle, providing a quiet interlude, and James Raiz raised the action bar again in the fights with the JLA and Zeus. His art is rather clunky, which suits the larger than life duel with Briareos.

If you only want to sample one book from Rucka’s five volumes, this would be the one.