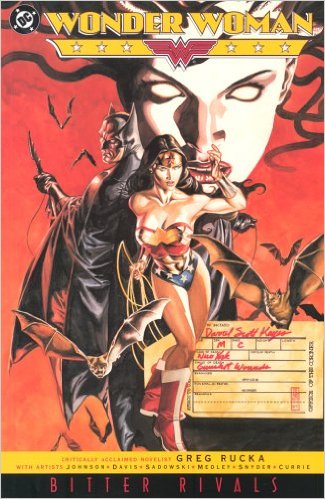 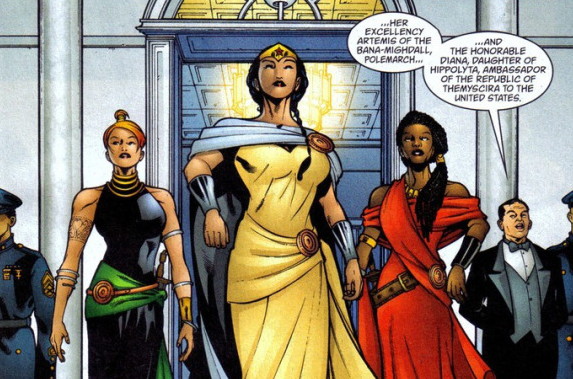 This second volume of Greg Rucka’s run of Wonder Woman from the 2000s is a relatively thin five chapter trade paperback building on the events of Down To Earth. That book established the world of diplomacy and international politics Wonder Woman works in, while this book quickly moves into the action typical of a superhero comic – a team-up with Batman and a fight against an old nemesis, Doctor Psycho. It is a not bad thing as Rucka uses such situations to advance the story initiated in the first volume – the consequences of Wonder Woman spreading her message of peace by setting up an embassy in Washington DC.

This has incurred the wrath of billionaire businesswoman, Veronica Cale, who for her own reasons has set out to destroy Wonder Woman’s mission by dragging her name through the mud, using the media and other, murderous, means. And when there is a murder, who do you call? It is satisfying that while Rucka has kept the world of Wonder Woman as Madam Ambassador as realistic as possible, he does not ignore the fact she is still a superhero in the DC Universe and a member of the Justice League of America. Wonder Woman asks for Batman’s help to solve a murder, and this team-up resonates because the first Wonder Woman story Rucka wrote, The Hiketeia, pitted the heroes against each other.

The writing and pacing is tighter in this second volume as Rucka establishes a rhythm and action of portraying the Amazon princess. Events are set up for the peak of Rucka’s four year run of Wonder Woman – the resurrection of Medusa and the epic battle between the two in Eyes of the Gorgon.

The primary artist is the competent Drew Johnson, continuing his steady run. He handles the fight scenes well, creating the suspense and tension necessary in the showdown between Wonder Woman and Doctor Psycho. There are guest spots by Shane Davis and Steve Sadowski, and the fine run of covers continues from J.G. Jones who drew The Hiketeia. To set up the next storyline, Linda Medley is roped in to retell the Medusa myth as a children’s cautionary tale.