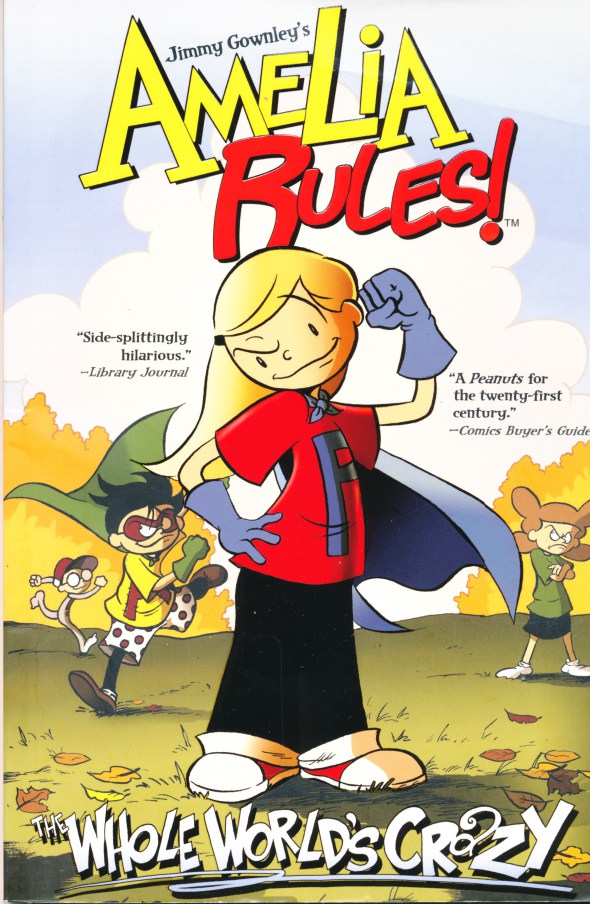 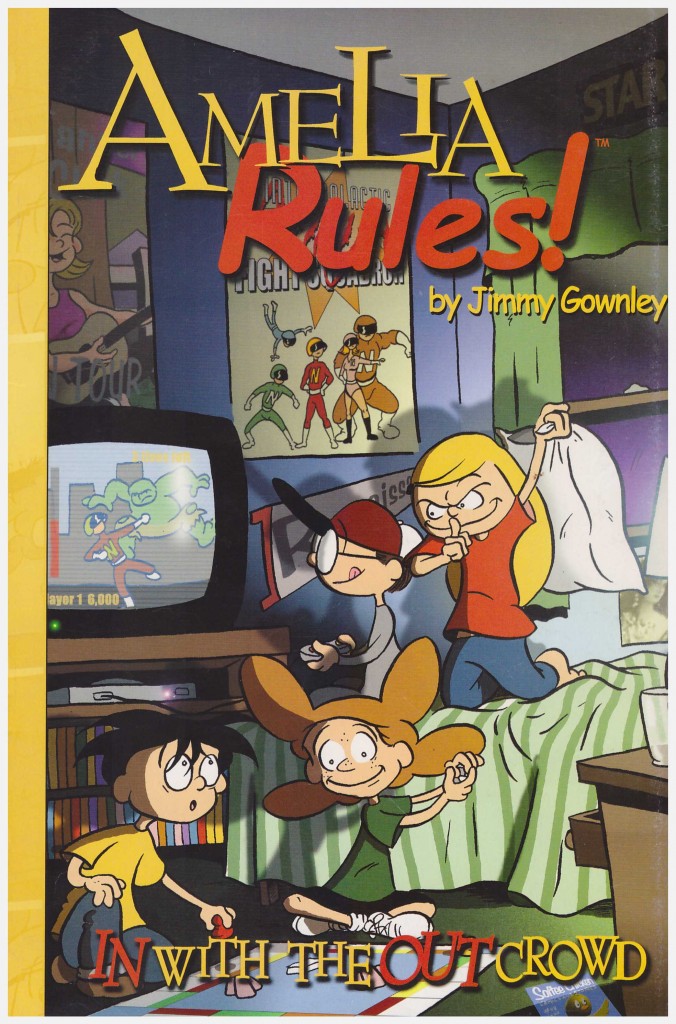 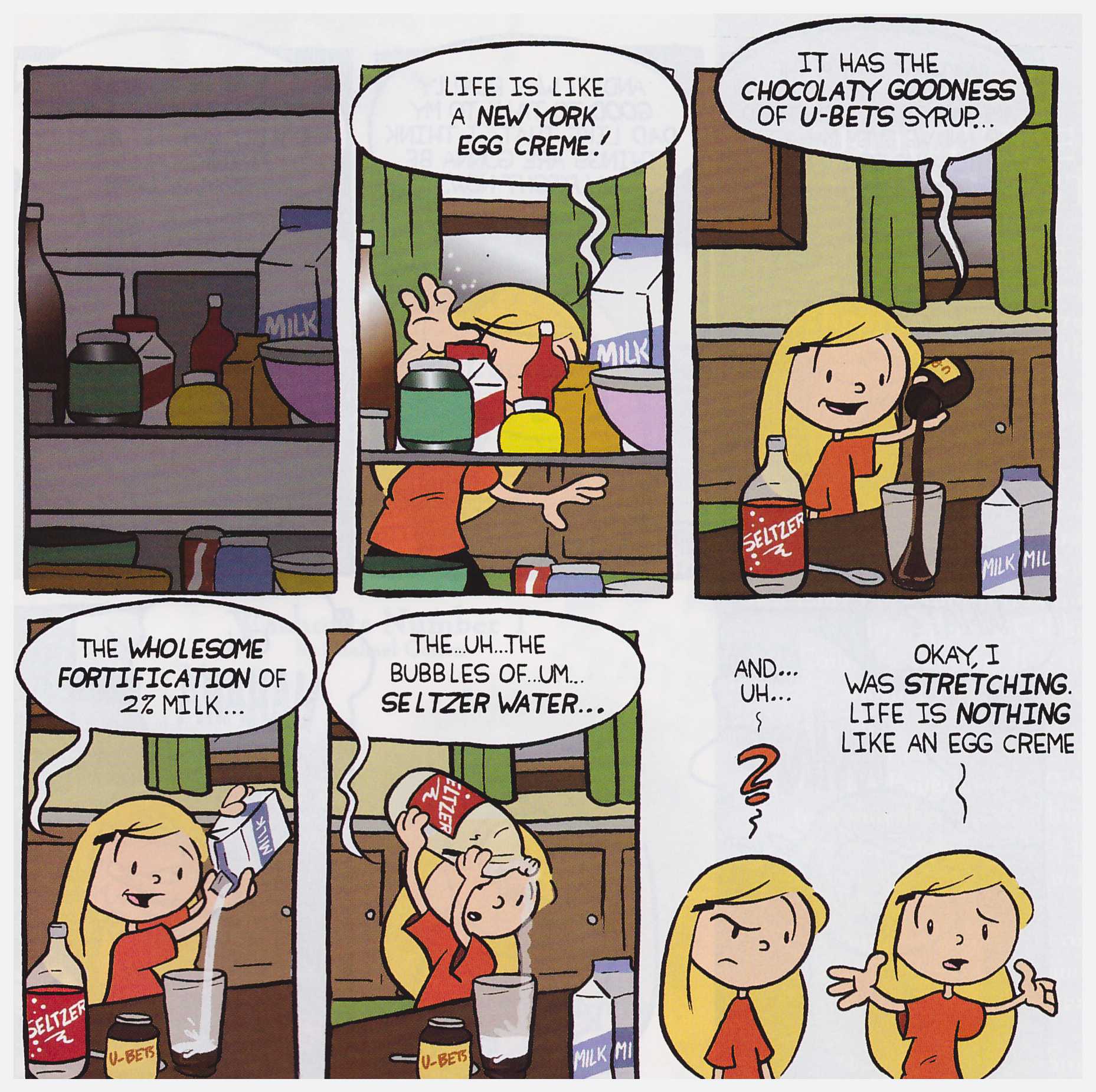 It’s a testament to Jimmy Gownley’s sure instinct and skills that this first Amelia Rules! collection arrived as the complete deal. There’s little difference in quality between it and what’s for now the final volume in the series, 2012’s Her Permanent Record. Gownley’s confident cartooning and bright computer colouring is already pleasing and accomplished, and his plots already tug at the heartstrings while also presenting a compelling and humorous insight into young children.

Amelia McBride is nine years old as the series begins, having relocated to a small town with her mother after a divorce. Her friends in Manhattan might as well be a world away, and as likeable as she is, staying with Aunt Tanner is a distant second best. Amelia is a resilient, upbeat and generally good-natured child who rapidly makes friends, initially not realising that’s the case with regard to Rhonda, who’s staked a prior claim on would-be superhero Reggie. Also in the group is the silent Pajamaman. Despite her shell of confidence the stress of her parents’ separation has taken its toll on Amelia, and her coming to terms with her new circumstances is a theme to which Gownley returns throughout.

Having established his style, Gownley also experiments with his storytelling techniques to good effect. As Mr McBride drives the kids, panels are interspersed with those from the comic Pajamaman is reading. Reggie draws the secret origin of his superhero alias Captain Amazing. A strange child named Violet – think Harry Potter’s Luna, who came later – speaks in purple tinged dialogue balloons.

Amelia Rules! oozes charm, a comment applying to any book in the series, without ever descending into saccharine melodrama. Big questions aren’t skirted, and this is a genuine all-ages comic. Parents can read (or extrapolate) it to their children who’ll immediately identify with members of the cast, while there’s enough material to sail over the heads of children, but providing that extra laugh or lump in the throat. The school attended by Amelia and friends is Joe McCarthy Elementary, which, as the sign says, has been weeding out the wrong elements since 1952, and adults will have the understanding of Mr McBride’s emotional turmoil about losing his connection with Amelia.

One portion of the book exemplifies where Gownley is going with Amelia, transcending expectations. Pajamaman appears at first to be a whimsical throwaway, the silent kid always in a onesie around whom Gownley can construct a few visual gags. Towards the end of the book the vexing question of Santa’s existence becomes entwined with Pajamaman’s circumstances and it’s heartbreaking stuff.

The quality touchstone for this type of material is John Stanley’s Little Lulu, produced in the 1940s and 1950s, but Stanley very rarely highlighted social matters, and then only obliquely. An update was long overdue, and it’s no exaggeration to claim that Jimmy Gownley’s Amelia Rules! equals the gold standard. It deserves far wider recognition.

The Whole World’s Crazy passed through several incarnations before the current Scholastic Press edition. It first saw life as a comic, progressing to a first collection as In with the Out Crowd published by Renaissance Press, then reduced to the current size and title for standardisation, but with a more illustrative cover. The series continues with What Makes You Happy.